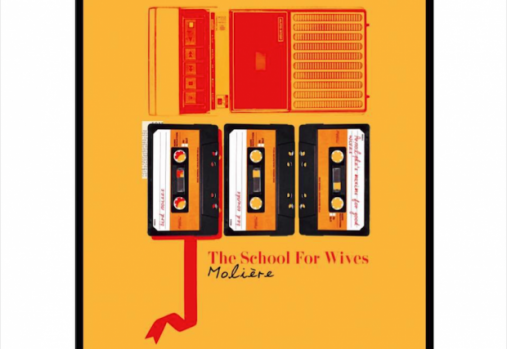 ALASTAIR CURTIS reviews the London previews of Roll Up Theatre’s The School for Wives at the Courtyard Theatre. 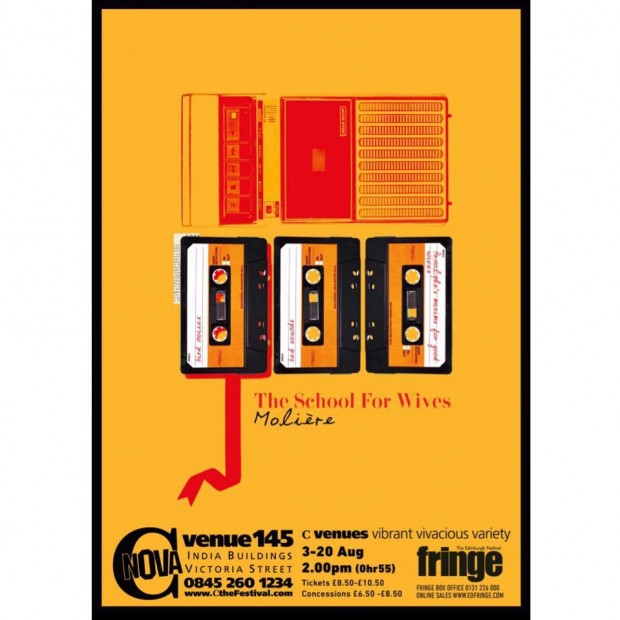 Moliere’s classic mixture of hypocrisy, innuendo and machiavellian sexual politics prove irresistible in Roll Up Theatre’s production of The School for Wives, the French playwright’s most scandalous play about marriage, deception and patriarchal insecurities. Moliere’s work—perhaps with the exception of The Misanthrope and Tartuffe— arrives only infrequently on the London stage because it can prove so difficult to resurrect: with elements of the commedia dell’arte, a stuffy aristocratic setting and paper-thin plotting, his work is often pigeonholed as camp, trite and, at best, a sort of antique theatrical escapism — a seventeenth-century Ayckbourn with frills. Forgotten is the fact that Moliere was a theatrical and political radical far ahead of his time, using farce to air his prescient views on religion, women and the ills of fashionable society.

Roll Up Theatre’s production of this neglected work succeeds because it presses Moliere’s daring sexual politics as well as preserving Moliere’s knockabout comedy. Under the sensitive co-direction of Charlie Macnamara and Wiebke Green, this emerges as a spirited proto-feminist play, in which the priggish, women-fearing aristocrat Arnolde —played in previews by Warren Brooking— is fiercely pinioned and mocked. Emily Redpath plays young ward Agnes, the subject of Arnolde’s marital conspiracy: stolen away from society at an early age, Arnolde has kept her preternaturally innocent in order to stave off the possibility of her corruption, an inevitability in educated society women. But the play is a schooling for husbands as much as for wives. Arnolde’s po-faced dictatorship is a result of the alarming insecurities he harbours about women’s agency; yet when the wide-eyed Agnes asks Arnolde to explain the logic behind the misogynistic maxims he spouts, he flounders — it is, of course, without logic. The patriarchal buffoon may be a hackneyed stereotype, but Warren Brooking’s lively and increasingly exasperated performance is intelligently observed, and not without some pathos.

Arnolde is certainly the play’s most vivid character, but a uniformly strong cast go some way to flesh out Moliere’s characters into memorable and individualised creations, performing the whole thing with generous gusto. Whichever way he turns, Arnolde is thwarted and slighted by those he depends on. Alicia Walton’s insinuating Christopher warns Arnolde with remarkable clear-sightedness of his plan’s flaws. Redpath’s Agnes may be demure and softly-spoken in his presence, but her outward docility conceals her diffident desires. These are directed towards James Fairhead’s woozy and passionate Horace, Arnolde’s best friend. Vacillating between despair and desire, Fairhead convinces as Agnes’ wistful, requite-or-die young romancer. Fleeting are the moments they share together on stage, as well as ridiculously celibate. Immobilised by chivalry, the two of them —Agnes ignorant of matters of love, Horace crippled by shyness— struggle to get past the constant bowing, curtseying and kissing of hands. But it is surreal rather than cloying, with David Denyer’s sound design —full of groaning and panting—providing a highly comedic contrast to the action on stage.

Co-directors Macnamara and Green are particularly alive to the play’s ironic contrasts. Innocent of the ways of the world, Agnes is also innocent of corruption when she sees and later practises it; she has no qualms about relaying stories of her encounters with Horace to Arnolde because she is blissfully unaware that what she is doing is wrong. And by way of a convenient name change, Horace is left unaware that Arnolde is Agnes’ ward, so when he excitedly regales Arnolde of his erotic exploits he is left baffled by his friend’s anger. These scenes of deception and revelation supply the production’s comic highlights. Elsewhere, there is Arnolde’s charmingly inefficient and quick-talking maid double-act, Elaine (Esther Shanson) and Georgette (Monique Williams). They peddle much of the play’s fnarr-fnarr humour and in particular, Shanson’s histrionic, clumsy attempt to explain the cause of Arnolde’s jealousy —like ‘dipping a spoon into someone else’s soup’ —is a winner. The maids, like Horace and Agnes, exemplify the play’s governing principle: that to be ignorant is also to be innocent, and to escape moral censure.

Moliere’s plotting begins to strain credulity towards its end and the production would benefit from a slackening of pace while it navigates its complex resolution, but this does not detract from what is a sure-footed and intelligent outing for one of Moliere’s lesser-known works. It is a bold and promising Fringe debut from Roll-Up Theatre.

Roll Up Theatre’s production of The School for Wives is showing at C Nova at the Fringe until 20th August. You can get your tickets here.