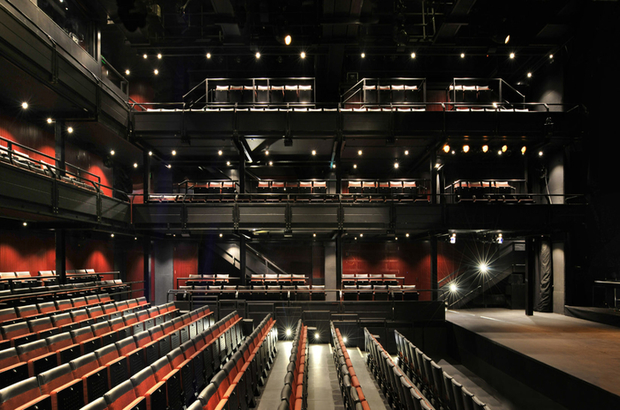 Whether it is our closeness to the stage, to the other audience members, or in more abstract terms, to the story and the characters we see depicted before us: intimacy makes theatre.

In the theatres above pubs, in nightclubs and in Edinburgh venues, there are barely two metres between the door and the stage. This is where the best theatre happens – on beer-soaked floors that stick to your shoes, on slightly uncomfortable chairs where you are as close to strangers as you are on the Victoria Line at 8:30 am. Costumes often consist of leggings and a block coloured t-shirt. Maybe some white trainers; they are not necessary in theatre where the execution of the plot carries the play and its audience. The lights are minimal, one or two at most. No special effects or flashing lights are needed; just enough brightness to light the face of the performer. Their performance alone takes the viewer on an adventure.

One of the best plays I have ever seen was one woman, in approximately one metre squared, telling her story of sexual abuse and recovery with her words and body alone. You would struggle to find something more compelling. I found it difficult to write a coherent and ‘conventional’ review. So intensely, viscerally, did it move me. A strip light and a metre squared is all you needed. We needed to be close, cramped in a small room buried in the depths of the echoing vaults with the silence and tension cut only with the body-shaking sound of a train passing over through Waterloo. A room of strangers becomes a room united by experience; no matter how tangential our lives. All of us thrown together in a stuffy, dark theatre to hear a story makes it intimate, connected. As Peter Brook says, anywhere is a theatre; performing in a space makes it a theatre, creating intimacy in a space makes it a theatre.

If space is needed, how do you make theatre when a two-metre distance is the minimum requirement for sharing space with other humans? Even the West End seems at loss to imagine this post-pandemic space: they have closed everything until 2021, when, presumably, we will be back to ‘normal’. The National Theatre and Royal Opera House have resorted to streaming plays once a week, a fantastic initiative that has rendered their theatre more accessible than it has ever been. Before, their audiences consisted of mostly white, mostly middle-class, and mostly middle-aged audiences. Now, anyone can watch their plays draped on the sofa in their PJs, with snacks and [interval] drinks at a fraction of the cost. There is a certain pleasure in Gillian Anderson’s career-defining performance in Benedict Andrews’ A Streetcar Named Desire being as streamable as something on Netflix, and Inua Ellam’s Barbershop Chronicles being broadcast directly into your living room.

Virtual performances give the theatre lover their temporary fix, but there is something missing: intimacy. It is difficult to recreate the smells, the sensation, the feel of theatre. Virtual theatre is exciting – artistically innovative and brilliant – but it is not intimate. Ultimately, you are reminded of being sat in your lounge, in your kitchen, and not at a ‘theatre’. Recordings do not match the felicities of live theatre. Everyone sees the very same performance, even if it is on a different day. The intimate knowledge of a specific performance evades the viewer; the show is generalised, even generic.

This is not to critique the cavalier efforts made by bigger theatres in the face of pandemic uncertainty and adversity but to question how we can recreate theatrical intimacy in the face of two metre distancing. Virtual intimacy is infamously hard to accomplish, and nowhere is this more pressing than in online renderings of theatre and performance. Water cannot splash out of a screen except symbolically; the hayfever-inducing scent of hay bales cannot escape the pixels into our lounges. We might even begin to miss the sticky floors of the pub theatres we never expected to miss until now.

The future of theatre is uncertain, much like the future of everything else, but one thing is certain: we need to create intimacy. Only then will virtual theatre reach the dizzying, visceral heights of the shows you see cramped in a north London pub on a school night, dazed by the aroma of centuries of pints, and choked by the musty scent of centuries of performance, of storytelling, of intimacy. The next few months, even years, will challenge theatre, but undoubtedly there will be a way. We will be back underground in the vaults before we know it, shoved in tight with strangers to endure or enjoy a whacky new play that might even be life-changing. It just might be at a two-metre distance, with a tiny audience that only allows for more intimacy; a more select experience.