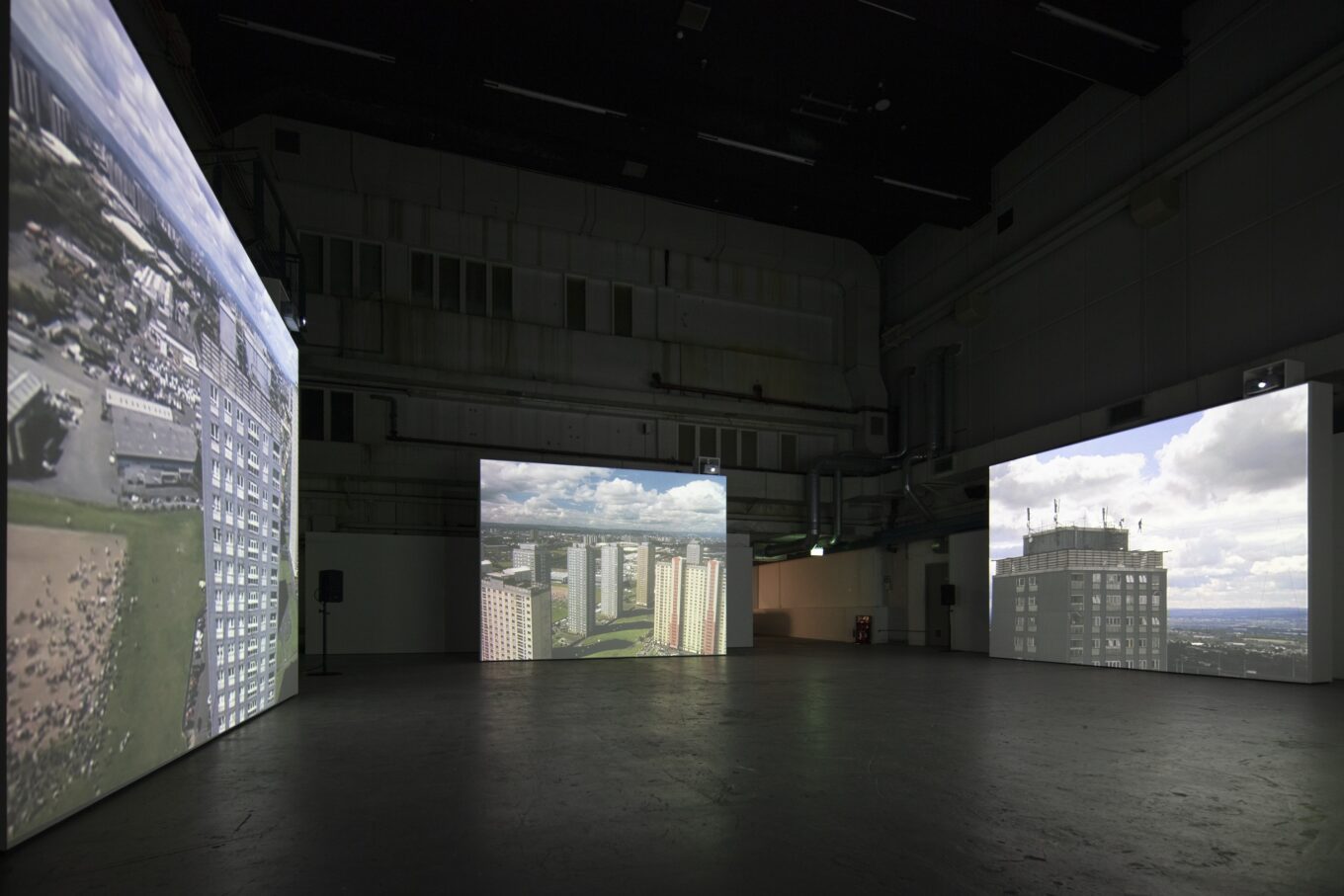 Catherine Yass’s film installation, Falling Away, immerses the viewer in a world that subverts our understanding of perspective and the nature of the structures which divide and organise our lives.

Eight films were on display within Ambika P3, projected on the walls in various scales and orientations. In the first film viewed was Descent (2002), the viewpoint  travels vertically along an upside-down skyscraper shrouded in fog, the camera gradually approaching the ground. As the film progressed, I felt more and more unsettled. After spending the first part of the video floating in the enchanting haze, the introduction of cars and construction workers on the ground proved disorienting. This shift confronts the audience with how incredible but also how absurd it is that people have built such massive structures, structures which seem to defy the very laws of gravity.

Similar feelings were evoked when I viewed Lighthouse (2011), by far my favourite film of the installation. A lighthouse stands on a rectangular platform, all of which rests upon a narrow stump, suspended above a large body of water.  Varying orientations inform our perception of the lighthouse. The camerawork itself proves destabilizing, especially in transitions which flip the orientation of the lighthouse from rightside up to upside down. Just when I’ve gotten somewhat used to these changes, the camera takes on the perspective of the waves from below, presenting a very unsteady view of the underside of the lighthouse’s platform.

This film was Yass at her most immersive and intriguing. I found the way she was able to capture so many different perspectives and feelings with such a seemingly simple and inanimate subject remarkable. When facing the lighthouse straight on and rightside up, I felt more at ease, but as the sky became the ground when the lighthouse was upside down, my feelings shifted. Experiencing the lighthouse from the water’s waves, there was a heightened sense of danger and instability (almost tipping me physically off balance at times).

Many of the other films in the installation expand on this motif of portraying different perspectives, in turn evoking different internal and physical responses. For instance, Aeolian Piano (2017) pictured a grand piano suspended by a crane from a variety of angles, which formed another diverse experience of a concrete subject matter.  Another, High Wire (2008), followed a person embarking on a tightrope walk between buildings. Three cameras filmed the event, each positioned at different distances from the walker, each providing very different experiences of the same event.

Falling Away by Catherine Yass was shown at Ambika P3 from 22nd October to 20th November 2021. Interviews and clips of her film Lighthouse (2011) that was shown as part of Falling Away can be viewed here.