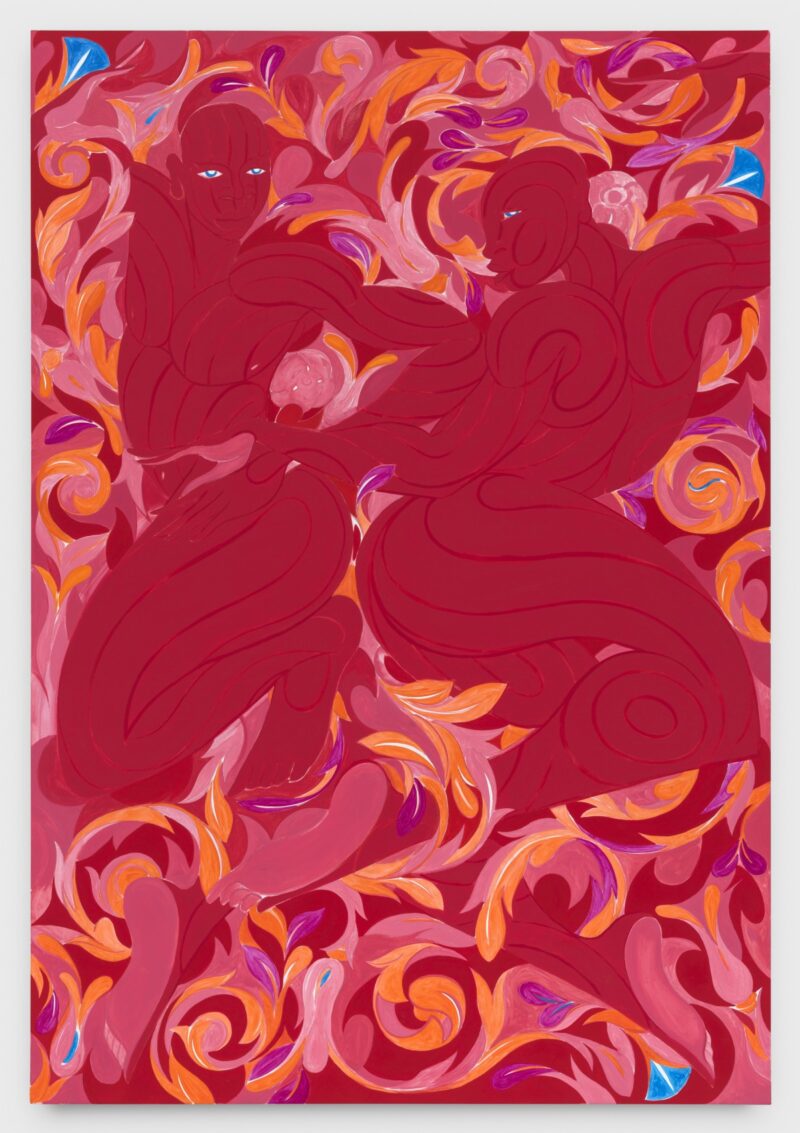 ZOSIA KIBALO reviews Tunji Aeniyi-Jones’ ‘That Which Binds Us’, at the White Cube Bermondsey.

Tunji Aeniyi-Jones’ first solo show, stretching across two rooms in the White Cube Bermondsey, advocates for transcending artificial boundaries created within the art world, and sets out on a journey to find ‘that which binds us’.

Aeniyi-Jones’ works capture androgenous, nameless figures in movement, bound to the canvas with bold colours and flowing lines. Their entangled bodies appear engrossed in ritual-like dance. Not restricted by gravity, Aeniyi-Jones’ subjects give an impression of transcending reality, of having journeyed somewhere beyond. The motif of the journey is rather common in Aeniyi-Jones’ work, the artist setting off to explore ‘how the transformative nature of the Black experience is nourished by travel, movement and cultural hybridity’.

Influenced by Nigerian artists Ben Enwonwu and Bruce Onobrakpeya, Aeniyi-Jones thinks of the human body as a narrative, something freed from the constraints of time, the artist stating that ‘there is something very rewarding about using the body as a vehicle for storytelling’. He uses it to explore how ‘cultural addition, combination and collaboration’ can stand against reductive hierarchies of culture. The bodies depicted in these works originate from the West African coast, as the artist delineated. Adeniyi-Jones sees the figures in his works as expressions of his identity. Born in 1992 and currently based in Brooklyn, Aeniyi-Jones takes inspiration from his West African, specifically Yoruba heritage, as well as his time growing up and learning his craft in the UK and US. His work seamlessly binds the mythologies and aesthetic traditions of these places, creating an aesthetic filiation between realism and abstraction, refusing to commit to either. By highlighting the flow between these once clear-cut boundaries, Aeniyi-Jones references not only his own life but also the part he plays in the legacy of the Yoruba diaspora.

‘Every memorable Greek myth or fable that we know of has an equally compelling African counterpart’, Aeniyi-Jones explains, ‘but because of reductive concepts like primitivism, one rarely sees the expansive world of ancient West Africa represented outside of the continent’. The artist mentions Chinua Achebe, Wole Soyinka and Amos Tutuola as individuals who have most notably made explicit these cultural parallels, expressing a desire for his paintings to serve as a ‘visual accompaniment to this lineage’. While looking at Charm, Grace & Mercy (2021), Charm, Honour & Grace (2021) and Pride, Honour & Faith (2021), works featuring a dark palette, one can see a clear compositional counterpoint to Antonio Canova’s The Three Graces. From the hazy dream of indigo and violet emerge three characters, mid-spin, gracing us with all their charm and beauty. Their heads are modelled after those of the Benin Bronzes, traditionally sculpted in memory of a deceased king, and come together in a festival of shapes and colours, an ode to the vibrant celebrations of the Yoruba.

Within the exhibition there was one painting that particularly grasped my attention. In Twin Virtues in Blue & Orange (2021), two mirrored figures exceed the canvas, taking up more space than the square allows. In contrast to other pieces exhibited, where the palette is consistent, here the artist decided to bet on contrasting colours. The mixture of vibrant blue and orange is dazzling, reminiscent of Dutch wax-resist fabric design that was popularised in Africa as a result of colonial intervention. Amongst the Yoruba, twins are believed to possess spiritual powers. Bound together from the very beginning, Adeniyi-Jones’ twins seem aware of their power. While most of his figures appear distracted, their gaze absent and unfocused, the twins challenge the viewer by looking directly at them. Art historian Camille Okhio sees his technique as being a process of catharsis and release, what she calls ‘an investment in the ongoing process of self-realisation’. The Virtue series relates to the artist’s childhood, where he used to come up with fictional siblings, longing for his own double.

Tunji Adeniyi-Jones’ works seek harmony. His canvases reflect his own experiences of being born into an immigrant family and his experience of a culturally hybrid upbringing.  Adeniyi-Jones’ individual characters are all part of the collective, symbiotic, spiritual experience that binds them together. Those nameless human forms, repeated throughout the exhibition, reflect his ability to draw from different artistic canons in order to amplify his positionality. Adeniyi-Jones finds balance amongst his origins and gives hope for a future without the outdated and limiting boundaries of the art world.

Tunji Adeniyi-Jones’ That Which Binds Us is on display at the White Cube Bermondsey until 9 January 2022.