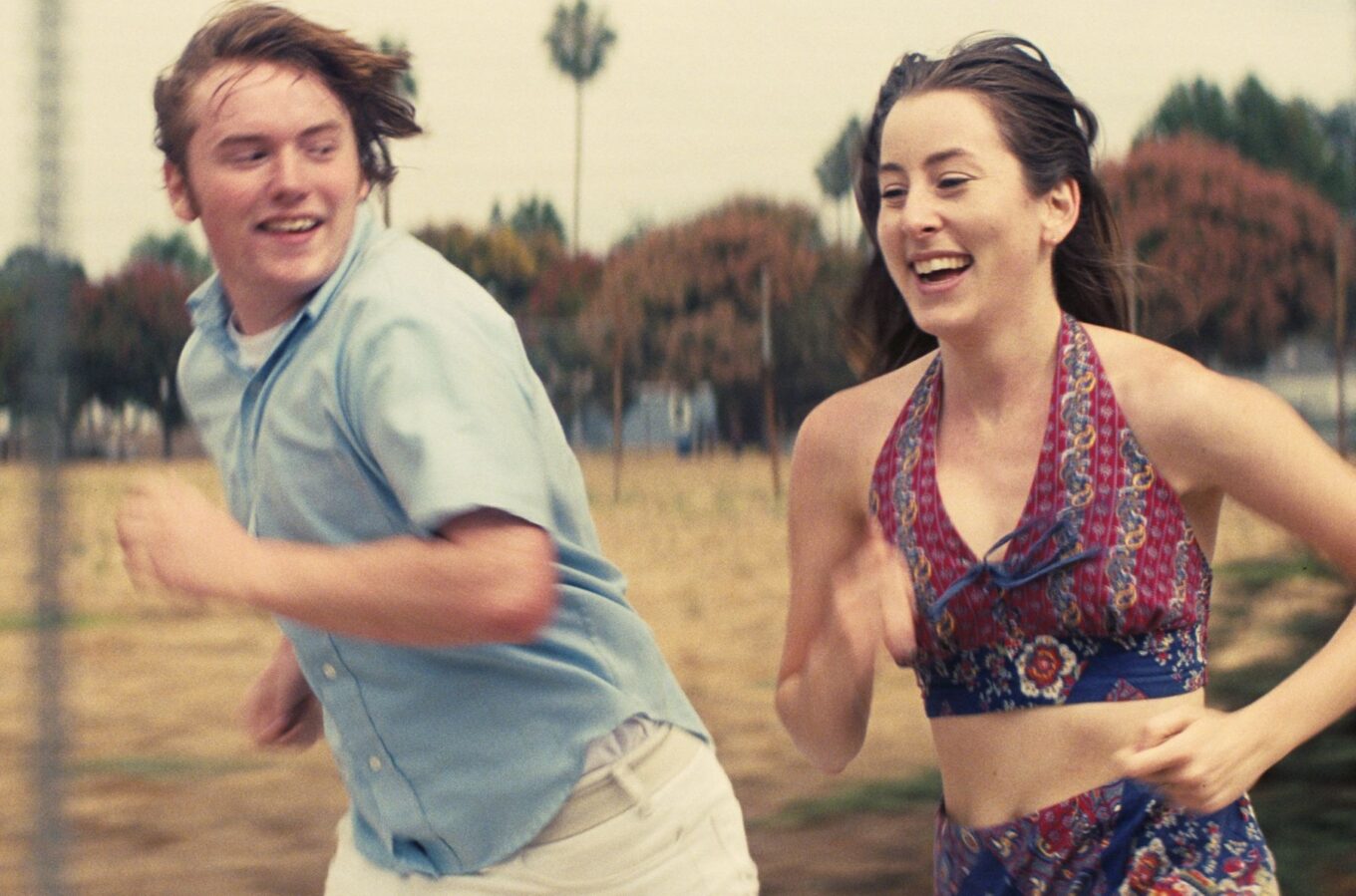 With the colourful and subversive Licorice Pizza (2022), Paul Thomas Anderson has created a bizarre but exhilarating offbeat romantic comedy.

‘Licorice pizza’, both a snack with the nostalgic taste of childhood and a slang word for vinyl records, is the perfect name for this film. In 1970s Los Angeles, we witness the stagnation and evolutions of the tumultuous codependent relationship between Alana, an aimless twenty-something with a strong character, and Gary, an overconfident teenager. Both Alana Haim (who plays Alana), and Cooper Hoffman (who plays Gary, and is the son of the late actor Philip Seymour Hoffman), are novice actors, bringing this movie a refreshing feeling of vitality. In the background of this relationship, Licorice Pizza weaves together heterogeneous characters and incongruous situations, conveying the overriding feeling of the movie: carefreeness.

The first scene, set in a high school, takes us deep-diving into the 1970s, with teenage boys combing their hair in front of mirrors, dressed in bell-bottom trousers and multi-colored striped shirts.In a master sequence shot following the protagonists in a line stretching throughout the school, the viewer witnesses the meeting of Alana and Gary. Within the first few minutes of their encounter, Gary asks Alana out, and despite initially being rejected, he negotiates his way into a date, confident that she will show up. Gary Valentine is an uncommon hero: fifteen years old, red-haired, pimply, and too tall for his age. All of these traits, however, are compensated for by his astonishing boldness. Having played a few secondary roles in movies, he considers himself an accomplished actor, a fact that he puts forward to impress Alana. Unfortunately for him, at this awkward stage between child and adult, the castings are rare. However, his entrepreneurial spirit is bulletproof, and he soon bounces back by successively engaging in the trade of waterbeds and pinball machines.

Alana is twenty-five, and a bit lost. Trying to find her way, she quits her dead-end job soon after meeting Gary, and starts following him in his seemingly crazy business plans and adventures, though she’s not exactly sure why. In reality, both the viewer and Alana are seduced by Gary’s assurance, often bordering on arrogance. He owns the world, and the world revolves around him and his plans.

Licorice Pizza alternates between an odyssey and a collection of skits, offering a disjointed story, but one that the viewer wants to hold onto. This hippie America of the 1970s, as depicted by Anderson, offers numerous quirky characters who provide us with the many cult lines of the movie, such as the seen-it-all casting agent who, staring at Alana, states that ‘Jewish noses are very in right now!’, or Jack Holden (stand-in for actor William Holden), played by a pedantic Sean Penn who ends up, in the middle of a dinner, exiting the restaurant to reenact a scene of one of his movies, a motorcycle jump above an open fire.

It seems that this film is held to reality only by a thread: the first fuel crisis and its dire consequences on the country of big cars features the colourful character of a producer under substance (played by Bradley Cooper), who meets the protagonists as he orders a massive waterbed for his mansion. In a display of polymorphic madness, he successively proceeds to threaten Gary’s family, scream in rage at the lack of fuel, and threaten to set a gas station on fire, leading to the unforgettable scene of Alana driving a truck in reverse down a several-miles-long slope.

130 minutes might be a tad long for this film, but the mix of brightly-coloured outfits, good actors, a basic narrative thread which stays its course and a great soundtrack, allows the viewers to overcome the lack of coherence between certain skits of the movie. The soundtrack indeed reviews many classics, and the adventures of the protagonists unfold to the rhythm of Nina Simone, Sonny & Cher, The Doors, David Bowie and many others, in songs that all seem to have been written for them.

Mid-movie, Alana asks her sister, ‘do you think it’s weird that I hang out with Gary and his fifteen-year-old friends all the time?’. Paul Thomas Anderson provides her with the answer,  convincing the viewer that, no, it is not: the age difference  is outweighed by the tangible and sometimes jubilatory connection between the protagonists.