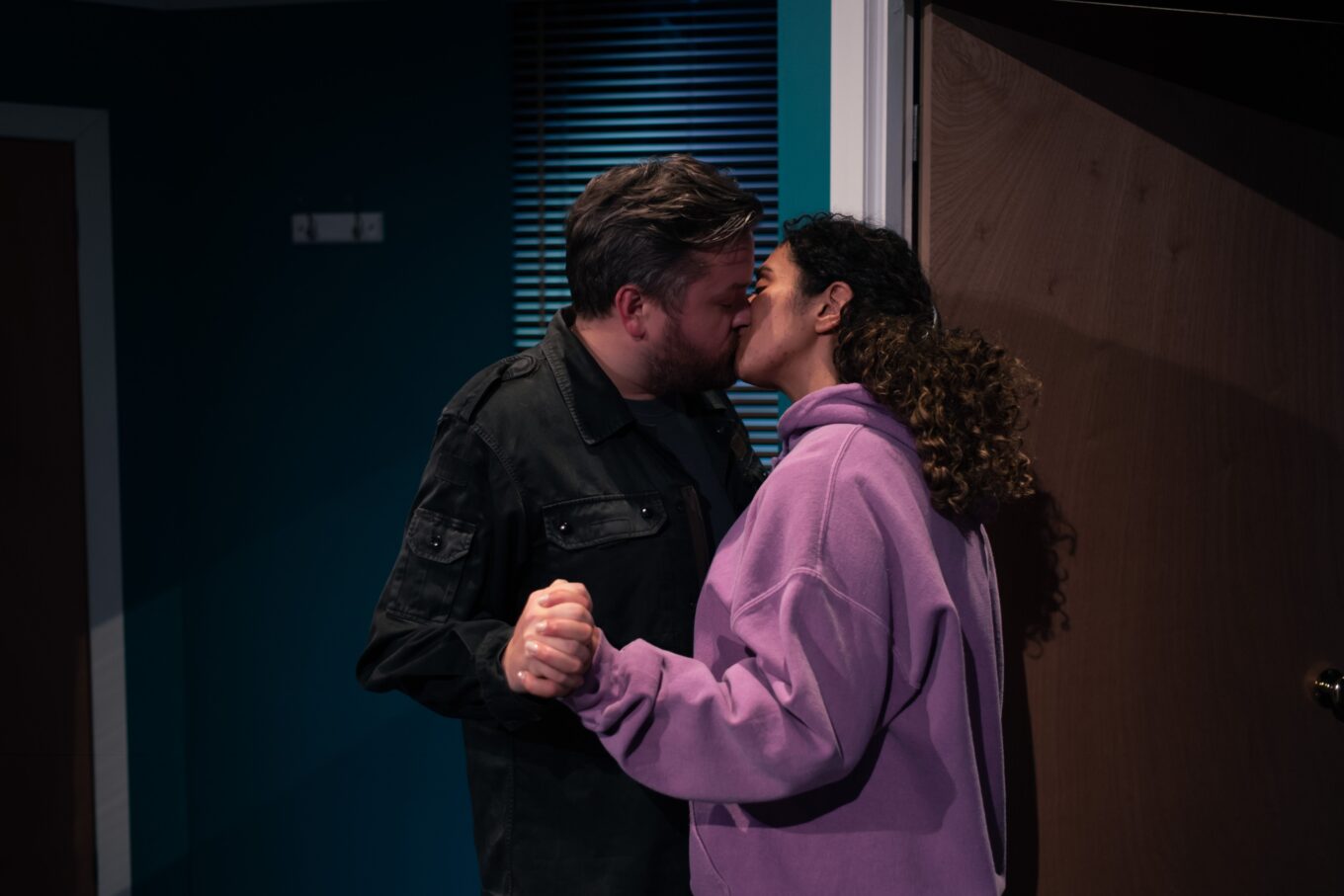 I dare you to find a more British production than the play Love Dance, directed by Lesley Manning, and performed by energetic comedic duo Jacoba Williams and Derek Murphy, English and Irish respectively.

Love Dance is the story of the meeting, based on a misunderstanding, of an indolent and unmotivated man, and a driven woman with a high-flying career.

When Rose (Jacoba Williams) comes back exhausted from a work trip in the United States, she cannot wait to finally get to her London apartment. Little does she know that the tenant she thought had gone several weeks ago, Adam (Derek Murphy), had misread the lease dates and was well-installed in what he considered his home. After mercilessly throwing him out upon her arrival, Rose has regrets, and the duo decide to share the apartment for the remaining month.

Upon entrance into the Chiswick Playhouse, we were welcomed with a simple and homey scene. When we took our seats, we found ourselves facing Rose’s living room. A couch, a tidy desk, two lamps, and a kitchen corner furnish an otherwise quite dull living room. The plain spatial layout of this living room, as well as the rooms we imagine behind the closed doors, suggested an outline of Rose’s personality; an extremely career-oriented young woman, who prides herself on notwithstanding any other distraction.

As the play begins, the lights shine on Adam, lying on a couch, tightly wrapped in a blanket, a joint next to him. As soon as the two actors interact, the comedic duo is set in place: one of Rose’s first remarks to Adam is a blunt ‘you really are a sad loser’.

The dialogue, written by Andy Walker, is light and witty with notably good puns – fellow students might feel targeted by the cutting exchange between Rose and Adam during the first days of their cohabitation:

Rose: ‘Are you gonna stay here all day and scratch yourself?’

The audience is then dragged through Rose’s rant as she debates whether or not she wants a child. There was an outburst of laughter, very significant of our society’s standards, when Rose, reaching the conclusion that she does want a baby but not the man that comes with it, asks Adam ‘Do you think it’s possible to find a guy that will just have sex with me, and then disappear?’

However, for Rose, finding a man is not enough, as even if he’s not meant to stay, she doesn’t want just any man, but a perfect one. Rose intends to make sure of that, through the creation of an interview process with questions about belief system, morals, and politics to ask her ‘baby daddy’.

Rose’s search for a man suitable to have a baby with ensues, with help from Adam. As in any good ‘enemies to lovers’ rom-com, our two protagonists start to develop feelings for each other, though of course, they are totally oblivious to them. Don’t worry though, the writers will not leave you in a rut; in between sarcastic comments, dance lessons and heartfelt confessions, the two become close – to the point where Rose asks Adam to have the baby with her (while he was sleeping, of course). As she states, doubtful and dramatic: ‘I’ve definitely met worse’.

This play can be summarised as an ensemble of light-hearted, short scenes linked by the common thread of the characters’ nascent romance, and of Adam’s evolution from a laid-back loser, whose only possession is a guitar, to a musician going on tour around the world.

Despite a few incongruous scenes, such as the one where Adam tries to teach Rose how to drive from her couch, the play has a good rhythm. Even if the duo’s performance was not flawless, it functioned well, and both actors brought a lot of character to their roles.

Jacoba Williams’ (Rose) facial expressions are simply hilarious, making her emotions all the more communicative to the spectator. Derek Murphy’s (Adam) performance, on the other hand, is uplifted above all else by his dancing skills. Although not a life-altering production, this witty play was a nice ninety minute escape. Featured Image courtesy of Francesca Lynn.

Love Dance was performed at London’s Chiswick Playhouse from 10 November to 4 December 2021.