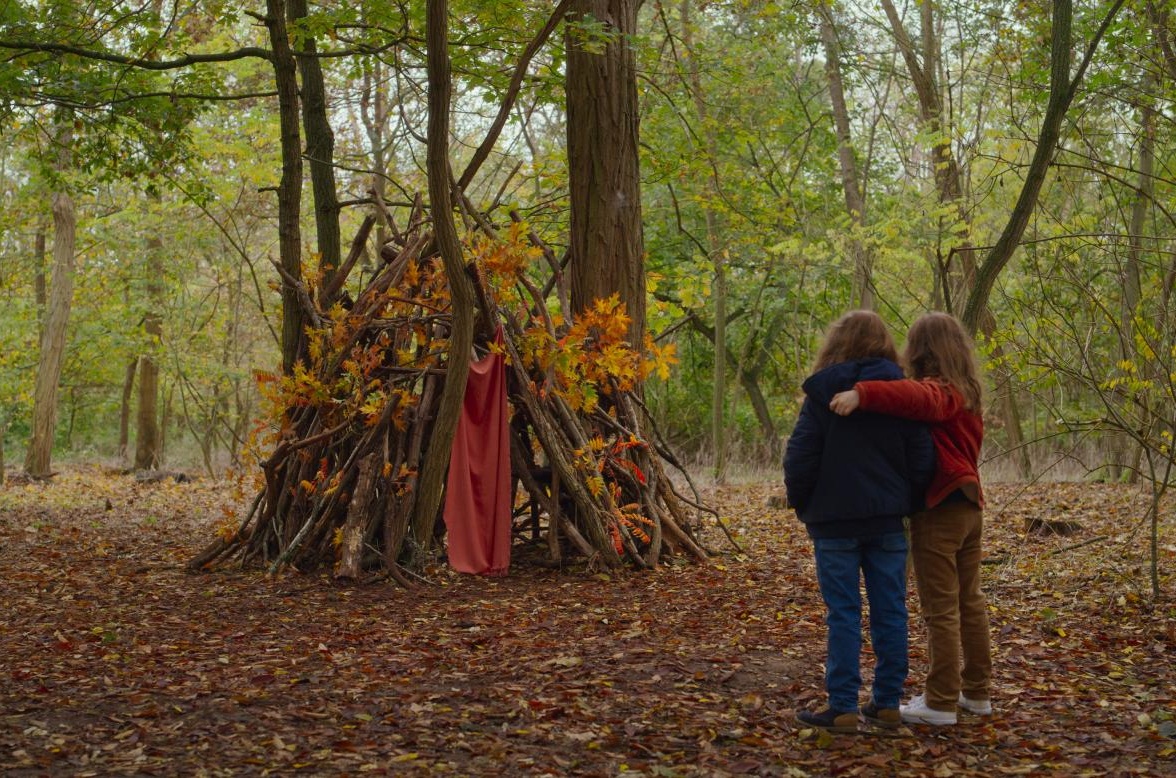 WILL PALMER contemplates Céline Sciamma’s portrayal of childhood and grief in her latest film, Petite Maman.

The most impressive part of Céline Sciamma’s Petite Maman (2021) is how it makes themes of nostalgia, grief, disability, fate and existential angst accessible through a simple, yet faintly familiar, story. Essentially, it is about two young girls who become friends and spend a few days together, make a den in the woods, cook together and perform their own play. These themes do not become so overbearing that the film loses the joy and playfulness at the heart of its story; yet there is sufficient gravitas that they are still quietly devastating when they do emerge, asking difficult questions that the film answers without sentimentality.

It is a film with three major emotional centres. Nelly is processing grief for the first time, and attempting to understand that mysterious misery that often underpins adult life. Secondly, young Marion is facing an operation to prevent her from being crippled in the same way her mother is. Finally, we have an adult who grieves the death of her mother on the eve of her own birthday, who also suffers from a sadness that is never made explicit to the audience, but nonetheless leads her to disappear without explanation. Perhaps the reason the film has such a good drive, that causes its seventy-minute runtime to feel more substantial than most two hour movies, is that it focuses on people trying to understand timeless human problems, without fat or fluff. Whilst there may be repetitive imagery that certainly creates the film’s more tiresome moments, such as both children gawping at the same house in different scenes, this still reinforces ideas of how time works in cycles, and the intergenerational difference is less than we think.

As is often the case for films whose principal interests are communication problems, sadness and inevitable decay, Petite Maman had the potential to be overwhelmingly miserable. In many ways, it is. Sciamma does not attempt to offer total solutions to these problems, but her unpatronising style makes the moments of joy feel closer to real life than a film that may skim over the reality of misery. Sciamma pulls off an excellent balancing act: not wallowing in this sadness to the point of excess, where the film might become an exercise in campy catharsis, rather than a genuine attempt to confront the problems of living. With a style that focuses on visual storytelling where we learn just as much from what is not said as from what is.

Despite Petite Maman’s premise putting it firmly in the magical realist genre, there is a seriousness and level-headedness to its approach which makes it feel close to the world of the audience; it feels like Sciamma and her crew simply understand people in a way too few major filmmakers do nowadays. The comedy is not forced, but rather takes familiar childhood experiences and illustrates concisely the joy that they create. As Nelly and Marion cook pancakes, they mess around and get food everywhere. Nelly laughs at her father as he is shaving, because the shaving foam makes him look silly. These events aren’t played for laughs, causing them to feel overthought and overly theatrical. We simply have a still camera recording what two people are doing, and Sciamma trusts that the audience will be able to see these events through a child’s eyes, and see that what has become so mundane for them can actually be a source of joy if we remember to occasionally embrace the child that still lives inside of us. That being said, Nelly often speaks like an adult, occasionally breaking the illusion of her innocence, reminding the audience that this is a film whose questions and observations are, themselves, an adult’s. Still, Nelly is the only character who truly probes others into revealing how they actually feel, so this is perhaps necessary, if the film is to reach the emotional depths it aims for.

Whilst Petite Maman is subtle in exploring its major themes, there is a visual simplicity that prevents it from becoming ambiguous to the point where it’s difficult to follow along. At its core, it is a tale of two young women becoming friends and reassuring each other about the future. One is dressed in blue, the other red. The grandma’s house is fairly barren, but becomes distinct through its simplicity, leaving the focus on the characters, primarily how Nelly and her adult mother comfort each other through play and laughter. Rather than focusing on the activities her characters perform, her camera concentrates on how the task connects the people involved, focusing on body language and expressions, to show how these damaged people help each other through difficult times. Whilst a fixed point of view may draw the audience into the characters’ personal experience, Sciamma keeps us as spectators. We don’t see what they do, but how they make each other feel. While much of the story is sombre, these moments of shared happiness ensure the audience does not leave the cinema feeling the weight of this sadness; instead, we are freed by the possibility we have, as parents, children or friends, to make each other happy, again and again.