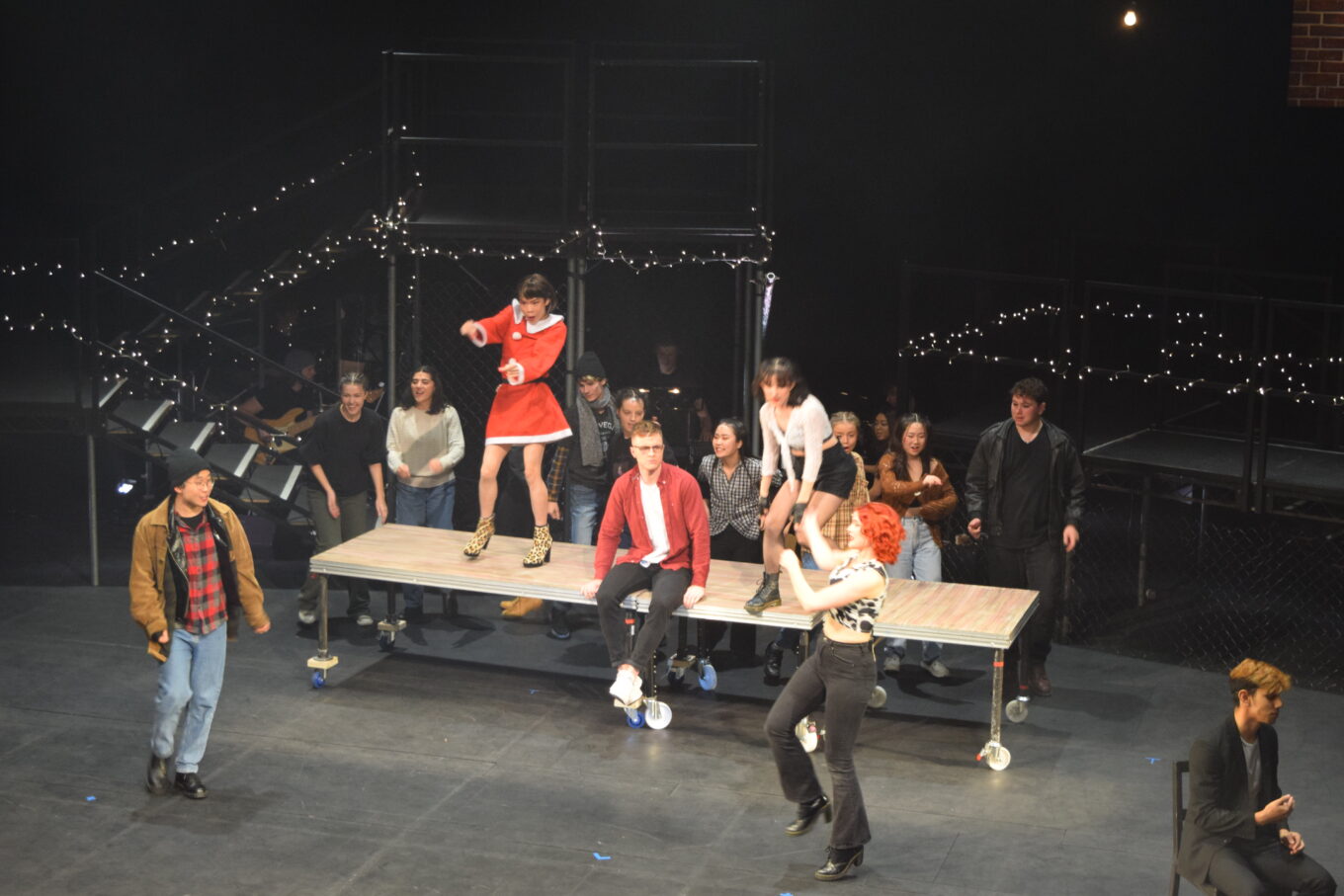 Performed from 2-4 December in the Bloomsbury Theatre, UCL Musical Theatre Society’s production of RENT was a powerhouse of a musical.

Jonathan Larson’s 1996 rock musical centers around the interconnected lives of three couples: Roger and Mimi, Maureen and Joanne, and Collins and Angel. At the heart of the musical is an exploration of identity within the LGBTQ+ community, encompassing conversations on drug addiction, financial pressure and grief within the context of the AIDS crisis at the end of the 20th century.

At the heart of the production’s success was the exceptional cast and band who, together with director Evie Robinson and producer Seyi Osi’s unique creative vision, brought Larson’s renowned show to life with dedication and enthusiasm.

From the opening scene, which takes place on a chilly Christmas Eve in 1989 in New York City, the cast made their mark on the stage. The iconic breaking of the fourth wall by Dave Quane, who played Mark, instantly created a bridge between the stage and the auditorium which, on reflection, was instrumental to a show that brings important discussions to the forefront of our minds. Together with Adam Haddor as Roger, Chris Lee as Collins and Theo Bailey as Benny, their rendition of ‘Tune Up’ set the scene for what was to unfold into a simultaneously entertaining and thought provoking production.

Jordan Lam, who played Angel, brought unmatchable energy to the show. ‘Today For You’ was one of the most remarkable numbers of the production, and Lam exquisitely captured the character of Angel in all their kindness, affection and hope on every occasion he appeared on stage.

Kristel Buckley as Joanne and Lottie Cousins as Maureen performed their characters with commitment and devotion, clear in their powerful duet, ‘Take Me or Leave Me’. During the production, we see the turbulent trajectory of their relationship and the emotional challenges the pair face both individually and together; Buckley and Cousins excelled in their respective roles, executing the comedic and emotive moments of their narratives to great effect.

In his stunning rendition of ‘I’ll Cover You (Reprise)’, Chris Lee’s exquisite vocals reverberated within the circle of support the cast members made around him,  as his character navigates the loss of Angel. It was one of the many moving moments of the show, when a pin drop could have been heard amidst the audience’s stunned silence. Collin and Angel’s relationship within the production was conveyed in such a touching, intimate and heartwarming way, that Angel’s death in the second half was overwhelmingly heart-rending, undoubtedly for both those who were unfamiliar with RENT before watching this production and those who have come across the story before. As Angel leaves the stage for the final time, the cast collectively pass Collins’ jacket between them, Collin having given it to Angel. We experience a moment whereby both the cast and the audience reflect on what we have lost in Angel. And yet, the subsequent scene where the cast members pay tribute to them acts as a precious sign that Angel will be remembered in all their beauty.

Adam Haddor’s portrayal of Roger and Lucy Dean’s Mimi offered another outstanding contribution to the show, both of whom brought powerful vocals and displayed the complexities of their relationship expertly as they each navigated their characters’s own individual struggles.

The production team’s use of staging and set design was considered and creative, adding another layer of brilliance to the performance. The collage of brick walls suspended from the ceiling provided a subtle link to the production’s urban setting, whilst the raised platforms of varying heights added visual diversity to the staging – the highest platforms provided a literal and metaphorical distance for the characters at times when they are traversing challenging experiences within their individual relationships and within themselves.

The supporting cast members maintained a lively and energetic spirit throughout the production on every level, with Maddie Dunn’s eclectic and dynamic choreography mirroring the themes of each individual musical number and contributing a visual spectacle to the performance. A particular highlight was the beautiful contemporary dance scene between Mia Rose and Laura Stone, as was the iconic number ‘Rent’ whereby the dancers set the precedent for a powerful and passionate production. Their energy was accentuated by the exceptional performance of the band (Thomas Rowe, Oliver Crampton, Thomas Kenny, Zac Drinkel, and Charlotte Lai); under Bjorn Frank’s direction, their accompaniment to every scene and conversation throughout was perfectly timed and executed, and they provided a fantastic backdrop to every musical number.

For every comedic highlight, there was a powerful message that resonated with the whole auditorium. UCL Musical Theatre Society’s production of RENT struck a wonderful balance between showcasing an entertaining piece of theatre and spotlighting a poignant narrative that continues to resonate long after you leave the auditorium. Such is testament to a phenomenally talented cast, an impressive band under outstanding musical leadership, and an incredible production team that brought the show to life in a remarkable way.

A memorable production that keeps you on your toes and exceeds all expectations.