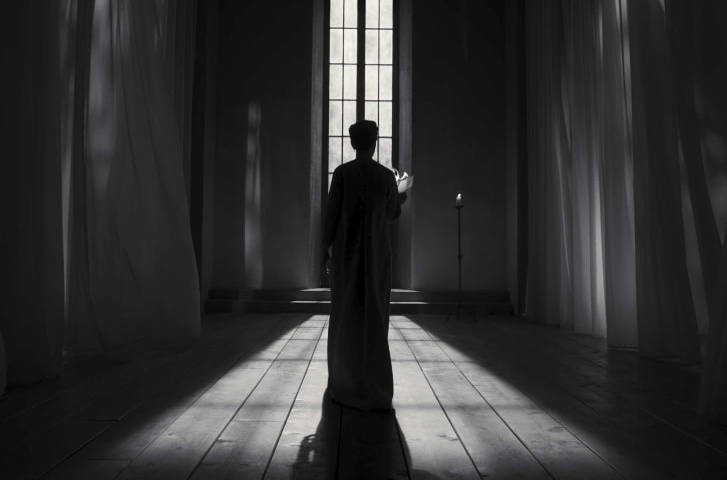 Winter had quite perniciously dawned upon me. First came a dip in evening temperatures, then the falling of leaves and finally the changing of the clock. Autumn had barely registered before the increasingly grey skies and short days brought about a new sense of reality. By that point, the cold weather felt inescapable and biting. Occasional days of cloudless, bright skies were but a momentary reprieve from the long months ahead that felt like a mash of cold and grey. It felt like I was caught in the gloomy world of a Shakespearean tragedy.

After much thought and the occasional back and forth, I decided to stay behind in London over the Christmas break to confront my immediate realities. Yet I was soon drawn to alternate forms of escapism, as I quickly found solace on the big screen in The Tragedy of Macbeth (2021), directed by Joel Coen.

Cinematic remakes of Shakespeare are usually quite true to form and it is precisely for this reason that expectations for such a remake are not usually high. Yet, this arthouse version of Macbeth truly transforms shared conceptions of what a Shakespeare play is and expands the boundaries of what it can be.

To begin with, Joel Coen distils the most fascinating aspects of a Shakespeare tragedy and reinvents it for a modern audience. The entire movie plays like a modern psychological thriller which Coen achieves through his crafty manipulation of shots and frames, such as the slow panning shots and sudden movements. The erratic pacing of the cinematography and story seem to create a highly disturbing alternate reality. Yet it feels incomplete on certain occasions, as some pivotal scenes in the movie do not feel very well developed. The original story places great emphasis on the characterisation of Macbeth and Lady Macbeth, their nobility at the beginning of the story and their gradual downfall – first psychological and then finally in the eyes of everyone else. However, in Joel Coen’s The Tragedy of Macbeth, the audience does not have much of an opportunity to build an impression of the two main characters before that impression is destroyed. Their downfall seems to begin almost immediately, with little in the story and characterisation to account for it.

Not that I am complaining; how many people really watch Macbeth for the storyline? The movie is above all a magnificent cinematic showcase and the downplaying of the plot may be an intentional device to highlight the stylistic and atmospheric qualities of the movie. Indeed, the cinematography was some of the most stunning and imaginative I have ever witnessed. While I was initially sceptical about the director’s choice of filming the movie in black and white (I tend to prefer a more pleasing and vivid colour palette on screen), it immediately became apparent that it was an apt artistic choice, as I was quickly blown over by the use of light and shadow, contrasts and contours in the film. Each shot felt like a work of art on its own that deserved much more attention than a few split seconds.  In fact, the movie felt like a cinematographic homage of sorts to Robert Mapplethorpe’s black and white photography, with parallels in use of light as well as the intensely sculptural and geometric quality of the shots. The interweaving of the cinematography with the story was also uniquely well done. When Macbeth slowly retreats or emerges from the shadows into the heavily contrasted light, it feels well placed within the emotions that the audience is experiencing and heightens the dramatic effects of suspense and tension.

The otherworldly effect of the movie does not end there. While the performance by the main characters is nothing to shout about, the artistic display by Kathryn Hunter (playing the Witches) is both mesmerising and bewitching. Hunter has had a prolific career in physical theatre and is well-known for her ability to ‘shape-shift’. This is fully on display to disturbing effect on screen as she contorts her body (naturally!) beyond imagination (and beyond what one may be able to stomach).  The Witches’ haunting presence on screen and ability to loom over the rest of the story even when they do not directly appear keeps you on the edge of your seat.

It is movies like this, even without the best developed or most interesting story, that showcase the magic of cinema. Joel Coen deftly creates an alternate universe that swallowed me into it unwittingly, and by doing so, helped me to untether myself from my reality – momentarily, but extremely memorably.

The Tragedy of Macbeth is currently showing in cinemas.