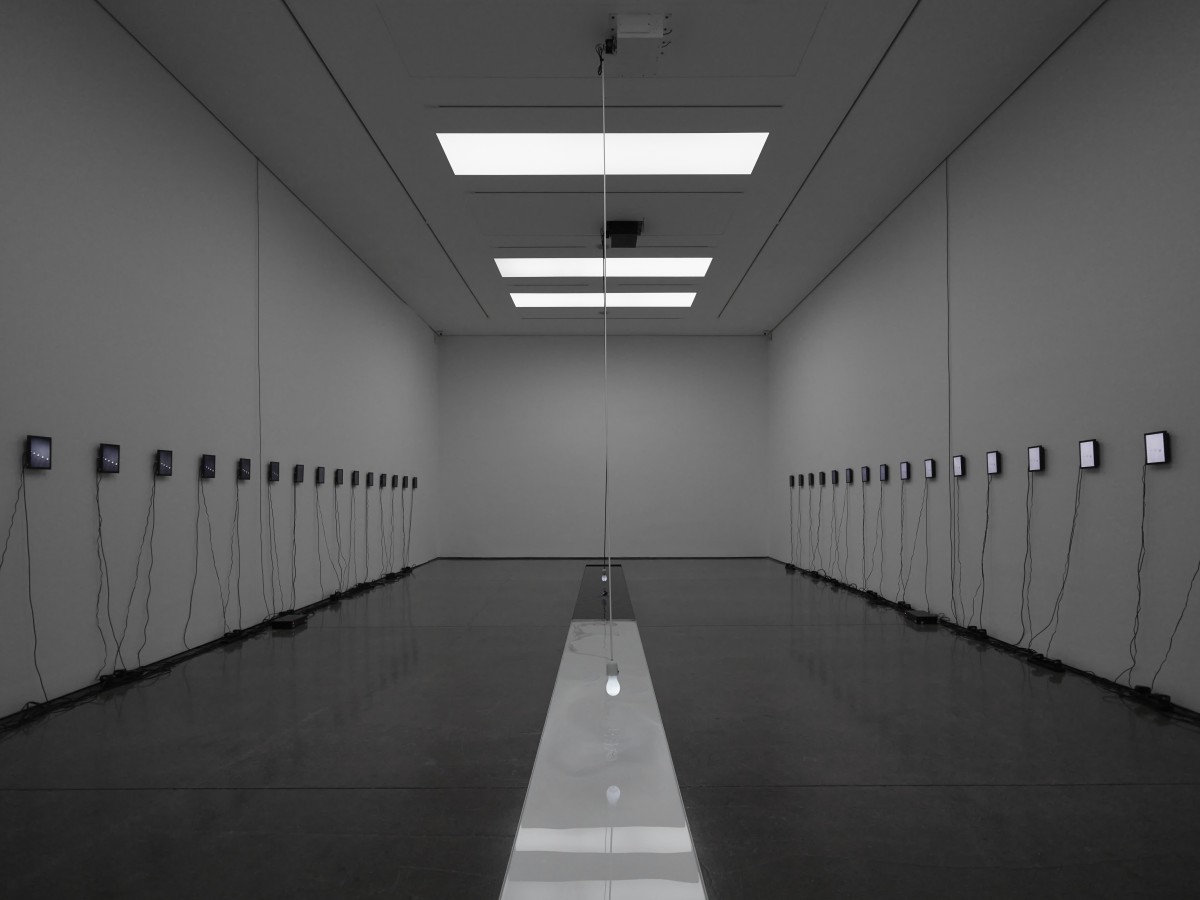 Two glaring light bulbs swing like pendulums across a rectangular pool. One side of the pool is dyed black, the other white. As the light bulbs rock back and forth, skimming the water, the silence of the exhibition room is broken by an incongruous mix of mechanical clicks and water splashes. Twenty monitors lining the surrounding walls display footage of the light bulb captured by hidden cameras, adorning the room with an eerie, watchful light.

This is the opening work of Chinese artist Wang Gongxin’s solo exhibition at White Cube Mason’s Yard. Swinging Gray epitomises Wang’s ability to put opposing qualities in conversation: black and white, stillness and motion, natural and artificial. Like Swinging Gray, the exhibition as a whole conflates styles and subjects that juxtapose each other. One piece references Marcel Duchamp while just a few feet away, another draws inspiration from traditional Chinese landscape paintings. Despite this, the exhibition emanates a sense of unity, utilising a monochrome aesthetic and minimalist materials. Through the idea of conflicts, Wang Gongxin reconciles the opposing cultures of the East and West, and of the changing self.

Wang’s methodology stems from ‘the stubborn belief that shifts in the form of art through time must be closely connected to real life, social environment and existential condition of people in the present’. Born in Beijing in 1960 and moving to the United States in 1987, Wang’s work embodies this environmental shift. He is greatly influenced by the ideas of Japanese author Tanizaki Junichiro, whose writing often explores the search for cultural identity amidst the conflicts of Western and Japanese traditions. Junichiro uses the dichotomy of illumination and shadow to symbolise Western and Eastern cultures respectively; Wang adopts these images to create his striking installations. Adjoining black and white panels and materials such as marble and copper are prevalent in his works. Visually, the exhibition is saturated with the confrontation between light and darkness. He focuses on the state of in-betweenness we find ourselves in instead of emphasising disparity.

For Wang, ‘in-between’ is a permanent state of existence. This phrase is usually used in a transitory sense, but the Chinese title of Wang’s exhibition, 在·之间, translates literally to ‘existing in the between space’. This space is constructed through movement; before advancing from one point to another, we experience simultaneous loss, gain and expectation. His works convey this exact feeling. When I saw Swinging Gray, I was initially hypnotised by its movement. Then, as I slowly walked around the room and saw footage of myself oscillating on the monitor screens, I felt alienated from my own reality and physical form, becoming a part of the artwork’s reality instead. Wang immerses the viewer in the installation while simultaneously plunging them into the act of changing. Similar to Swinging Gray, other installations in the exhibition use the interplay of light and movement to assimilate the audience. Mover Light consists of two panels and a keyhole. A frosted video screen in one corner displays footage of the viewer captured by a camera hidden in the keyhole. As they are drawn in by their own reflection, the panel pulls open unexpectedly, revealing a garish vertical lightbeam. A few seconds of intense hope and expectation suffuse the viewer before the panels close again. This is the actualisation of the ‘in-between’ space where a longing for repetition has been disguised under the longing for change. Is this not the feeling we are overcome by when thrown into the unknown, whether it is a new country, culture or even a new stage in life? Wang’s installations are deeply captivating because they probe this grey area of existence.

It is particularly striking that despite the exhibition’s heavily artificial and monochromatic nature, it is far from rigid. Art which is overly saturated with technology can feel impersonal but Wang breaks this barrier by allowing the viewers to see themselves both literally and figuratively in his work, creating a permeating sense of intimacy. Instead of detaching the viewer from the art, the hidden cameras and display screens act like mirrors, generating a dialogue between artwork and audience. The viewer is given the illusion of control, feeling as though the artwork is changing on their behalf. But like the constantly evolving world around us, control and certainty are merely facades. Wang explores the human tendency to dominate our surroundings. He focuses on nature in particular, presenting it through solely artificial materials: this creates a tension between the potential shift to either total digitisation or a return to nature. The viewer is once again left anticipating sudden change. Change is oscillating, reciprocal and ever-present. Wang creates the false illusion that we are the centre of his artistic metamorphosis but in reality, is it not the evolving nature of our surroundings (in the exhibition room and beyond) that pushes the self to change? Wang’s works explore more than the discrepancy of cultures; it explores the discrepancy of the self existing in two different places simultaneously.

Wang Gongxin’s In-Between is open at the White Cube Mason’s Yard until 26 February 2022.