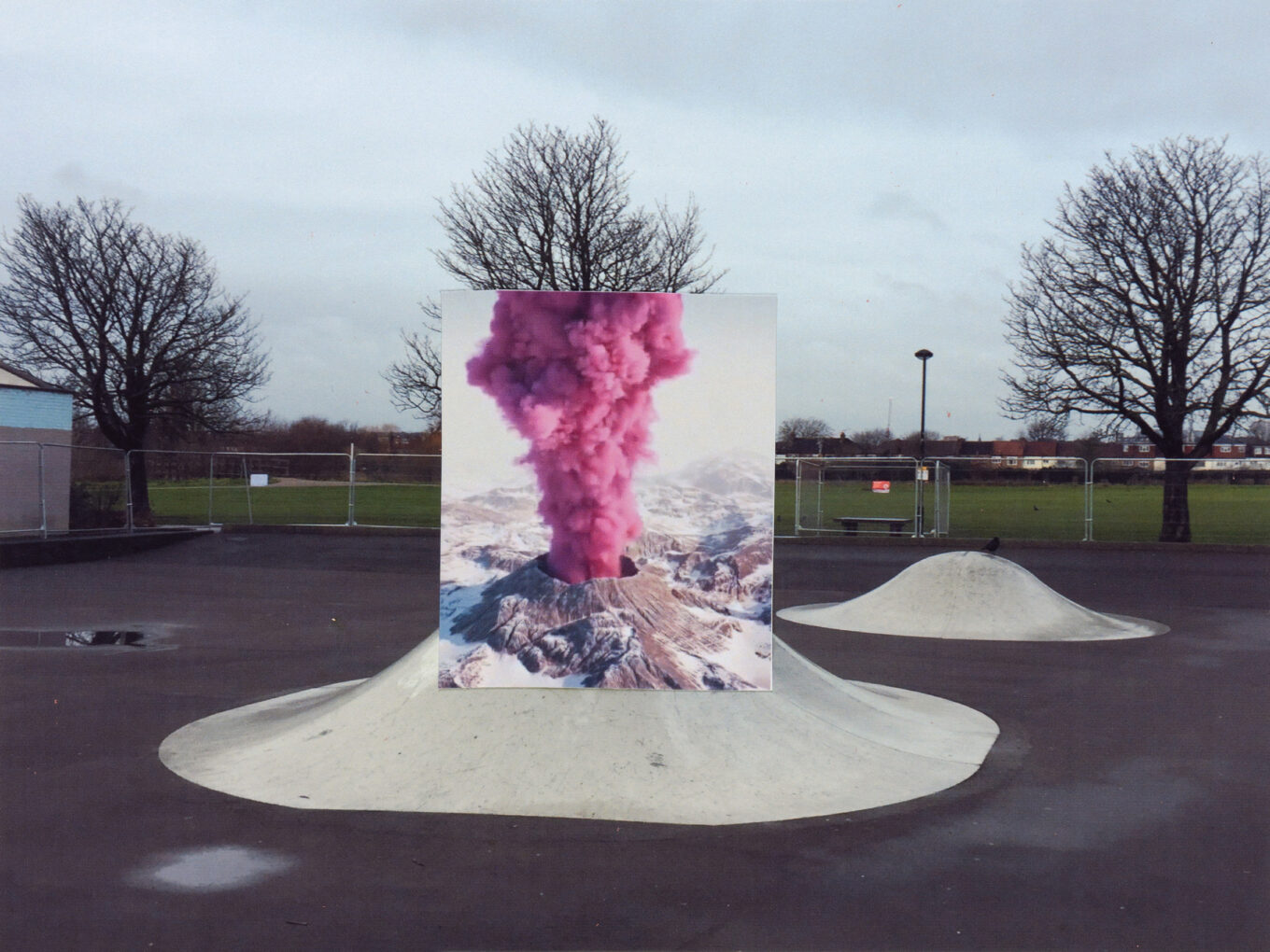 Vlatka Horvat’s latest exhibition, By Hand, On Foot, currently on display at PEER Gallery, is an insight into the relationship between space and creativity, between the playful and the serious. Horvat utilises a variety of media, such as collage, film, performance, and sculpture, to address the way in which we inhabit space, how spatial boundaries can be built up and broken down, and how we communicate with both natural and urban environments. Her work is playful, displaying an almost fantastical approach to the mundanity of our everyday surroundings, and urges the viewer to reimagine how physical structures both impose and encourage communication. This is Horvat’s first solo exhibition in London, and Hoxton’s PEER Gallery provides the ideal space to display her work. The first two galleries display the series To See Stars over Mountains (2021) as well as  sculpture pieces, while the final room displays her most recent film Until The Last Of Our Labours Is Done (2021).

To See Stars over Mountains (2021) is the central piece of By Hand, On Foot. The piece is a vast series of 365 photographic works, taken each day of 2021 on Horvat’s daily walks, which she then altered by collaging, drawing, tearing, and cutting the images. The entire series is presented 53 pieces at a time in seven week-long instalments, changing throughout the exhibition’s two-month lifespan, creating a display which is fluctuating and dynamic rather than constricted within one moment of time.

I experienced the first week of To See Stars Over Mountains, in which the months of January and February were on display; despite the peculiarity of this period in time due to Covid-19 restrictions in the UK, Horvat’s experimental use of media introduced a sense of play and imagination into these months of restriction and separation. Certain works expressed a clear yearning for personal connection amid the harshness of the built environment; in the piece for 3 January 2021, she uses coloured crayon to link a row of houses together via their chimneys. The connecting lines round into a rainbow-like arc, suggesting the existence of a unifying, utopic force, only visible through a lens of childlike creativity and optimism.

Horvat injects joy into the mundane, creating playgrounds out of tower blocks, rubble slides, bungalows, and pieces of metal. The collaged ‘slides’ that protrude from these living spaces seem to provide a direct connection between their inhabitants and the outside environment, even acting as an escape route out of enclosure. The same spaces recur throughout To See Stars Over Mountains, evoking routine and the quotidian, yet the escapism that pervades the series always allows a sense of novelty. Castles, fountains and volcanoes are layered onto urban British landscapes, a reminder of the far-away that we so long to experience. There is a sense of magical realism in the simplistic way that Horvat places fantasy amongst the everyday, encouraging the viewer to leave the exhibition observing their environment through the eyes of a child, seeking enchantment within the banal. To accompany the exhibition, Horvat has published a book containing all 365 works of To See Stars Over Mountains in which one can trace the development of the year, evolving from the grey escapism of winter all the way to summer’s technicolour.

Her sculptural works also maintain this element of seeking. In What Is On The Ground and What Is In The Sky, Horvat uses cheap, conventional materials such as cardboard and duct tape to create pieces that intrude the gallery space, extending from the ground to the ceiling. The installations bend to the floor and probe upwards, simultaneously limited by and pushing against spatial boundaries. Horvat creates the illusion of the ceiling being held up by these forms, both creating space while obscuring the pathway through the exhibition; the illusion is forest-like. As a consequence, the viewer is made aware of their own physicality through the caution that must be employed to traverse across the room around these works.

These sculptural pieces explicitly communicate the problematics of inhabiting space, as well as the way in which people engage with their environments. This sentiment of inhabitation is continued in Window Seat (2022). A broken window sits atop a chair in a state of watchfulness, in front of the gallery’s own (thankfully intact) window, visible to passers-by. Its occupation of space extends outside of the walls which hold it. Forebodingly, the broken glass signifies a destruction of invisible boundaries and the concrete, comfortable ownership of space which the chair beneath alludes to. It is both a display of and a warning against voyeurism and breaking out of one’s own spatial boundaries; the window through which we can peer may be broken, yet the piece’s position before the gallery window allows it to continue searching beyond the space it inhabits.

The exhibition also screens Horvat’s most recent video work, Until The Last Of Our Labours Is Done (2021), a 25-minute-long piece filmed in the same locations which appear repeatedly in To See Stars Over Mountains. It reflects the ambiguous relationship between play and labour, how humans unconsciously blur the lines between them, and how this phenomenon affects the natural environment around us. Individual figures are shown rolling every-day objects, such as spools and tires, across turf and mud, sometimes with leisure but sometimes with frantic haste. They repeatedly place a wooden cuboid onto the floor before running across its length, mimicking the playground games of childhood. However, overlaid audios of the lone figures panting juxtaposed with the footage of them occasionally collapsing suggests ardour, as if this play is intertwined with imperative duty, rather than something they perform out of choice. These strange depictions of playful labour, or laborious play, always interact with their environment. Grass and foliage is compressed and mangled beneath objects, serving as a warning against the damage that human activity, such as our leisure or work, has on the spaces we occupy. This attests to the detrimental effect which our desire for objects and control has on both the environment which we inhabit as well as our own sense of peace.

Vlatka Horvat’s By Hand, on Foot is an often simplistic, yet wholly reflective, depiction of an innate human desire to imprint on spaces through play and imagination, and how this can both enrich and harm the environment around us. Simultaneously displaying utopias and dystopias, her works reflect how we seek to break the boundaries of physical space and reality.

The exhibition will be displayed until 2 April 2022 at PEER Gallery, Hoxton. Horvat’s 376-page book, To See Stars Over Mountains, published in collaboration between PEER and Unstable Object, is available to purchase at PEER gallery and online, as well as a unique series of works of paper by Horvat titled Around Here, which will be accompanied by a limited edition handmade artist book to document the series. A series of conversations with fellow artists will be held at the gallery in March, with further details to be announced on peeruk.org/vlatka-horvat

Featured Image: Vlatka Horvat, To See Stars over Mountains, 2021 (11 January). A series of 365 works on paper. Collage and drawing on inkjet photo print. Copyright the artist.