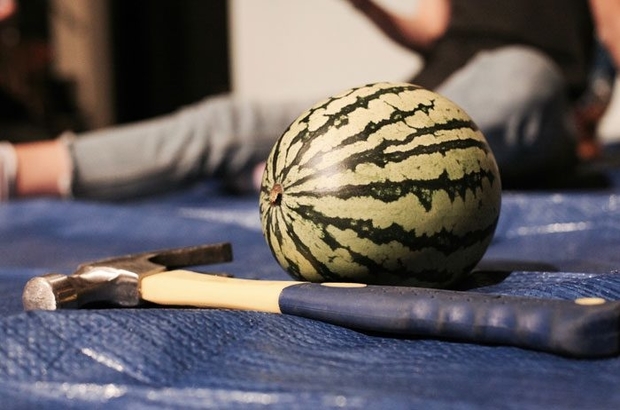 The Völvas’ The Vagina Dialogues

The Völvas are an international feminist performance ensemble, oozing with talent and performing beautiful, important stories. The Vagina Dialogues is a series of episodic monologues, sketches and physical pieces drawn from the personal experiences of the cast members. At times hilarious, at times agonising – they cover all bases. They are unafraid and unashamed of discussing anything. The show, in all its dancing, singing nudity, is wickedly empowering.

As the audience walk in, the five women are stood in the centre of the room holding hands and humming in harmony. Once the audience are seated they begin to sing: ‘I bit my tongue up until now… It’s time to change.’ From here they spring into the drama; begin to make their accusations, tell their stories and make demands. Whenever one woman is performing alone, her companions sit behind her on stage and respond genuinely to what they see – occasionally in uproarious laughter. As well as the individual performance occurring, we are seeing a functional support network of women in action. It’s excellent.

The cast has no weak link, but a special mention should go to MJ Ashton, who performs a piece of spoken word about sexual violence and isolation with devastatingly believable intensity. This scene is followed by a beautiful piece of physical theatre, in which Ashton and Sarah Jeanpierre portray a couple inching towards intimacy by consensual movement, ending in a kiss that is in stark and relieving opposition to the scene that came previously. A few minutes later all five of the cast grip bottles of Lambrini and cry/sing along to the likes of Celine Dion and Alicia Keys down the phone to their partners’ voicemails. They sprawl about the stage throwing wine over themselves and shrieking. The show continues in this manner – always balancing the funny with the tragic, moving quickly between the both and never settling for long on either.

Being so clearly and directly linked to Eve Ensler’s The Vagina Monologues, it is also a success of the Dialogues that it does not stand in its shadow, as a piece still performed and read frequently 21 years after its publication. Its intense honesty and the clear bond of the cast make it a decidedly unique production, and one that will doubtless make a lasting impression on the young women (and men) that are lucky enough to witness its magic.

Milly Thomas’ Brutal Cessation promises to be an exploration of violence in relationships – specifically dissecting how violence is often perceived as gendered in cishet relationships. It begins with a few apparently unconnected scenes in which we see an unnamed couple (played by Lydia Larson and Alan Mahon) bicker and irritate each other, making clear that the relationship is somewhat stale. Following this, a new, unrelated scene: whilst eating dinner together, Larson’s character outlines a fantasy she has – of smashing her boyfriend’s head in. She goes into explicit detail and it is quite terrifying to listen to. Following this, the actors begin to switch roles, and though the violence described is never physically acted out between the two characters – there’s a particularly visceral and upsetting scene in which Mahon smashes a watermelon with his hands and a hammer, whilst he looks Larson dead in the eye. The abuser becomes the abused.

The concept of the show is intriguing – once the characters have swapped genders and their associated roles once, they continue to do so repeatedly and the play takes on a mirrored structure, starting where it began but with the characters in the opposite position. However, owing to the audience not knowing the characters in any real way, not even their names, it is somewhat difficult to engage with their journey – or care how their story ends. They are acted expertly, Mahon and Larson switching between manic expressions of vulnerability and manic brutality seamlessly, so it appears to be a fault of the script, or the direction, that the play unfortunately finishes a little flat.

Catriona Knox is a natural entertainer; her show is weird and wild, but has the audience completely enrapt. In Adorable Deplorable she flits between characters including Asma al-Assad, Phillip May, Melania Trump and Kirsten Mehr with comic aplomb, both attacking and applauding the quirks they bring to their roles as the partners of politicians.

The show focuses on the gendered nature of the ‘support’ role of a first lady/gentleman; comic jabs are made at the Mays – in his sketch, Phillip is flyering for a show him and Theresa are putting on at the Fringe because it is a ‘boy’s job’ – while Theresa stays home panicking, doing the ‘girl’s job’. The show ends with Anne Boleyn leading a yoga retreat from the Tower of London, whilst giving a terrifying, hilarious speech about the possibility of women coming to power. A song plays as the audience leaves: ‘Women of the world take over, or the world will come to an end.’ None of it makes much sense nor has a very consistent message, but it’s uproariously funny and ultimately a sharp piece of satire. 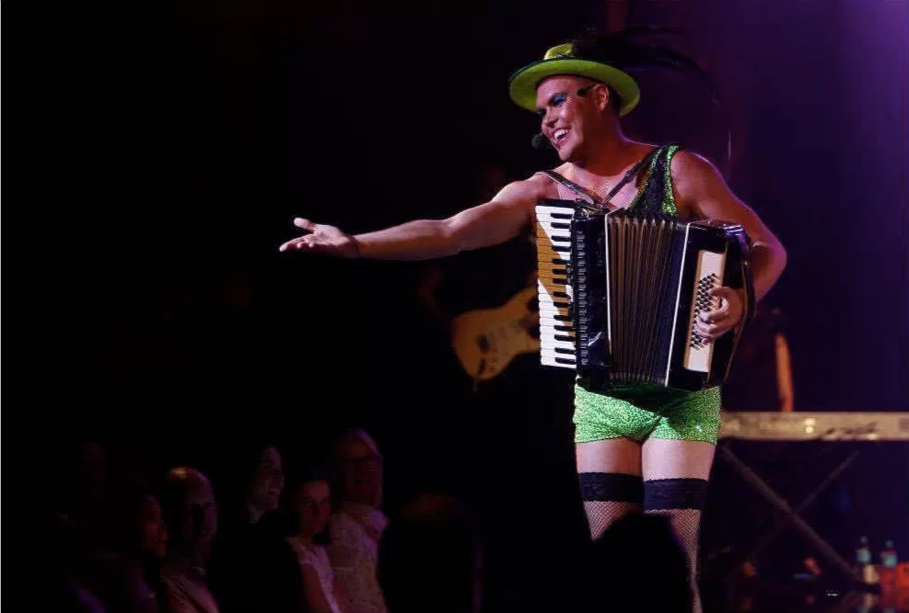 This is a show truly about women taking over the world, but is not as problematic as the title may suggest – or, it is, but it’s charming enough to get away with it. Hans is a ‘German’ drag queen, delivering to the audience his plan for taking over the world – by making people have some ‘f***ing fun’ again. By writing off the original Mein Kampf through likening it to a compilation of Katie Hopkins’ columns, he sets out to make a mockery of all things hateful – and succeeds. He dances, sings and plays the accordion through a number of hilarious covers – including a mash up of ‘Money Money Money’ by ABBA and a slant on Britney’s ‘Hit Me Baby One More Time’ – ‘Hitler Baby One More Time’ – whilst wearing a ‘Make America Great Again’ cap and tearing Trump to glittery pieces. The irreverence that tends to accompany drag is present in full force, and even though the current state of politics that Hans continually berates is undeniably tragic and dark, we are invited to laugh at it. Hans is hysterical, and the three-piece band that accompany him are fantastically in tune with everything he does – even when the show began with some technical difficulties. This is a brilliant show to relax into at the end of a long day at the Fringe – its only fault is that it ends too soon.