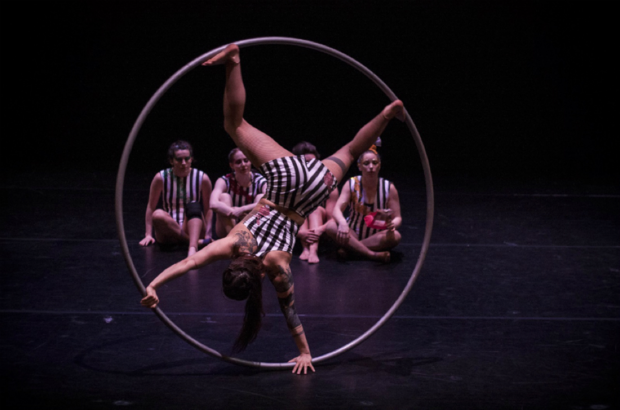 No Show is a display of female strength and resilience, sprung from an industry which favours displays of feminine beauty and grace: the circus. The concept of the show seems to have come from the crux of a speech given by Kate, one of the five female performers; she is sick of being told by her male counterparts – who continuously get given the work she specialises in (Chinese pole) – that she is good ‘for a girl’. What follows is an hour of defiance.

The women mock the idea that they should be present simply to be beautiful. They stare at the audience in the pauses and do not try to hide being out of breath. This is underscored by a motif in which Alice, a hand-stand acrobat, attempts to speak to the audience and create a real connection. Every time she begins to speak, two other women dart onstage telling her to stop talking, covering her mouth with their hands and physically push her up onto the balancing canes. When she is up, they make more and more demands of her every time the scene is repeated. They tell her to smile, move more gracefully, distract the audience from her ‘huge arms’ somehow – try and get her to do it like a body-builder they’ve seen on YouTube. It is tongue-in-cheek to the extreme. Towards the end of the show is the biggest ‘f*** this’ moment of the piece. They all sit down panting, having just performed an act in which one performer swings from the ceiling by a rope attached to her hair, and dig into a bag of donuts. They eat them slowly, to music, looking straight into the audience.

The message of the piece is desperately clear – but so too is the skill of each performer. Lisa’s manipulation of the Cyr wheel is astounding, and made even more so by one of the other girls standing by her side and narrating the potential dangers of the act going wrong. The collective power-tumbling and cartwheeling sequences are intricate and mesmerising. The great shame of the performance is the venue in which it is held. One of the performers does a funny pantomime of the skill she would have demonstrated had the ceiling been high enough, and takes to an imaginary trapeze. As well as this, the seating is not raked enough to allow the audience in the back few rows to see much of the choreography. It is annoying, particularly in this kind of performance, when so much thought has clearly gone into the placement of each and every step.

No Show is playing until August 27th at Summerhall. Find more information here.

Happy Idiot’s parody of D.H Lawrence’s notoriously scandalous novel laughs at the very social constructs which made it so supposedly risqué. Following the war and having lost his legs in battle, Lord Clifford Chatterley returns home to his wife, Constance. They agree that she should try and get pregnant by another man, to create an heir for Wragby Hall – but Chatterley does not know that this other man will be their game-keeper, the hyper-masculine and incredibly dense Mellors, with whom she falls in love.

In this witty re-imagining of the novel, the comedy lies in the mens’ complete (and accurate) disregard for what Constance actually wants. This is most clearly demonstrated when Chatterley says to Constance ‘You are not a woman. You are my wife!’ She goes on to sleep with Mellors for the first time in the following scene, the tension is high in the preamble – and he lasts five seconds and pushes her off. The play goes on as such – a brilliant pantomime of misogyny. Overall the play is very funny – there are brilliant farcical sex scenes in which balloons stand in for genitalia, and the four-strong cast match each other in energy and presence. There is not a dull moment for the audience – though we are left fearing a dull future for Constance.

You’ve Changed is Kate O’Donnell’s self-devised (almost) one-woman show, guiding us through her experience of transitioning in 2003 which, as the theme of the piece suggests, may as well have been the 1930s, in terms of the ignorance and discrimination that she faced. She begins the show in top hat, white tie and tails – the image of Fred Astaire – and slowly morphs into a ball-gowned Ginger. It is a piece that celebrates the progress that has been made since she transitioned, but laments the time it has taken.

She sings, acts and dances with ease – although the script feels a little too stock-phrased at times to suit the subtleties of her discussion, and her jokes rouse more appreciative smiles than actual laughter. What is really striking about the production is its frankness. The audience are given the exact figure she spent on her surgeries, a photocopy of a list given to her by a friend who had transitioned just before her entitled ‘How To Transition’; we are even shown – in an amusing sketch about FAQs post-op – her vagina. She lays everything completely bare. In discussing painful pieces of her past – her abusive childhood, the indignities of proving her gender dysphoria to psychologists – she never once raises her voice, or alters her tone from that of the entertainer. She is a bold and unique voice for the trans community, and the Fringe is the perfect place to celebrate her.

There is no easy way to review a boozy, irreverent, glitter-soaked extravaganza such as this. For its technical merit it is what one would expect: a night of ferocious and well choreographed routines from a number of performers – but ‘technicality’ is not what has drawn the crowd. We are here for drama, and we are not disappointed.

Our host for the night is seven-foot Gingzilla, a bearded glittering goddess of a man, who’s dramatic costume changes, dazzling vocals and six-inch heels set the precedent for the guest acts he directs. The line-up changes nightly, so it’s a lip-sync lucky dip. On the 26th, the audience are first graced with the surreal and hilarious private-eye Butt Kapinski – who warms us up amply with his portable interrogation lamp and unreasonable demands for participation. Other highlights include Lada Redstar, a burlesque performer who begins a dazzling butterfly complete with enormous feather-boa antennae and metamorphoses into a dazzling almost-naked woman; Calvin Arsenia, a harp player and vocalist with a modern twist who’s cover of Britney’s ‘Toxic’ gets a well-deserved standing ovation; Betty Grumble the sex clown – who performs a lip sync completely naked, pulls a cling-filmed sushi roll out from her vagina and proceeds to eat it. Only at Fringe would such a collection of performers be in the same place at the same time, and come together to create such a wickedly good whirlwind.

The volunteer lip-syncers and cat-walkers deserve a mention too – and it is a credit to the environment created by Gingzilla and the crowd that numerous people thrust their arms into the air to get on stage and perform. And they do make fools of themselves, for the most part – but literally nobody in sight cares. And in the true spirit of drag, as each act finishes Gingzilla comes on stage screaming ‘Praise her/him!’ – and we do. It is a vast sea of intense support and positivity both onstage and in the audience. Maybe it’s the alcohol, maybe it’s the buzz of the crowd – but it is impossible to leave the theatre not feeling that the world is a little more welcoming than when you went in.