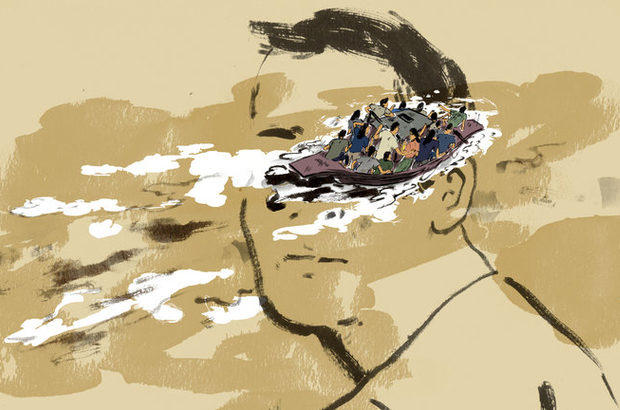 EMILY HALL explores the many faces of exile in Viet Thanh Nguyen’s The Refugees.

I wish everybody had a sense of what it is like to be an outsider, to be an other. Because that’s partly what gives rise to compassion and to empathy — the sense that you are not always at the centre of the universe.

In his new collection of short stories, The Refugees, Pulitzer-prize winner Viet Thanh Nguyen gives voice to the outsider. The stories feature protagonists who are in a state of suspension: between the past and the present; the homeland and the adopted country; remembering and forgetting. As the epigraph taken from James Fenton’s ‘A German Requiem’ reads:

Nguyen’s narratives are sensitive explorations of this dichotomy of being haunted by the past, yet forced to forget as a way of assimilating and surviving as a refugee.

Born the son of immigrants, and himself forced to flee his home in South Vietnam in 1975, Nguyen defines himself through the prism of the refugee experience. The word ‘refugee’ denotes an individual who has been forced to leave their home: a displaced person. This taxonomising, which defines millions of individuals under a single label, further separates the individual from that identity which is sacrificed in the process of seeking refuge. Liem, the protagonist of ‘The Other Man’, expresses this loss of identity, ‘casting himself as just one more anonymous young refugee’ when he is asked, ‘What was it like? How does it feel? Isn’t it all so sad?’ Nguyen deftly recognises the loss of humanity implicit in the label, ‘refugee.’ Transplanted ‘in a distant city’ where he feels disconnected from both his native and adopted national identities, Liem must create himself anew. A clandestine same-sex romance leads him to reconsider his sexual identity and confront his socially conditioned homophobia. ‘The Other Man’ invites the reader to consider the intersections between the geographically displaced, and the self-estrangement caused by a society’s rejection of ‘extrinsic’ identities.

It feels appropriate that the opening story, ‘Black-Eyed Women’, haunts the rest of the collection. A female writer is visited by the ghost of her brother, who gave his life to protect his sister from being raped by pirates on the voyage out of Vietnam. The story is moving in its exploration of love, loss and violation, and of a separation of siblings which is to be mirrored in the collection’s final tale, ‘Fatherland.’ As the narrator recounts her ‘youth in a haunted country’, it is evident that these memories will plague her, regardless of geographical location. Nguyen’s response is to use story-telling as a way of positively memorialising and individualising the ‘anonymous’ refugee. ‘In a country where possessions counted for everything’, the narrator observes, ‘we had no belongings except our stories’. She explains how, ‘writing was entering into fog, feeling my way for a route from this world to the unearthly world of words’.  Strikingly similar is the refugee’s journey, across oceans and across cultures, tentatively adapting to a new life and coming to understand the history which situates them there.

While the autobiographical ‘War Years’ is set in the Vietnamese-refugee community of San Jose, ‘The Americans’ reverses the role of the outsider.  James Carver is an American pilot who fought in the controversial Vietnam war. On a mission to make amends for what she sees as her father’s wrongdoing, his daughter Claire moves to Vietnam to teach English. She claims, ‘I have a Vietnamese soul’, which vexes her father and confuses any sense of her fixed identity. It is this poignant turning inward which energises Nguyen’s collection; whether it be looking to memories, to the soul or to the donated liver of which Arthur is the beneficiary in ‘The Transplant’, Nguyen is fascinated by the fluidity of human identity and ‘the alien within.’

Beautifully composed and elegiac in tone, ‘I’d Love You To Want Me’ weaves together the essential thematic threads running through Nguyen’s collection. When Professor Khanh develops early onset dementia and his marriage begins to deteriorate, his wife allows him to call her by the name of his past lover, ‘Yen’, in a voluntary surrender of identity which mirrors his own diminishing sense of self. Heart breaking in its portrayal of loss – in love, memory and identity – Nguyen presents the reader with a woman who becomes a refugee in her own home, unwilling to forget.

This is the poignancy of The Refugees. Whether estranged in the domestic space, suffering internal conflict or enduring geographical displacement; a refugee of war; love; sexuality; or family; the collection both individualises and unifies its protagonists through a persistence to survive relatable to ‘all refugees, everywhere’.

‘The Refugees’ is published by Corsair (February 2017).