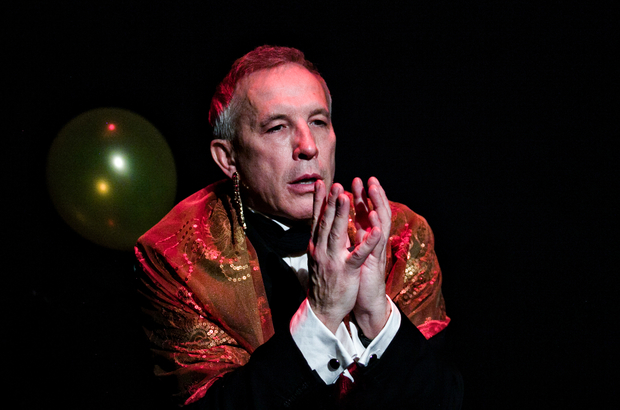 ZANE KAHN reviews The Last Act of Harry Houdini at The Cockpit.

The Last Act of Harry Houdini, written by Barry Killerby and directed by Ishwar Maharaj, is a drama that offers the audience an insight into the tormented and troubled interior of the famous illusionist, Harry Houdini. A man who built the foundation of his infamous career through his death-defying stunts, Houdini is shown throughout this exploratory tale as a seeker of truth; searching through the seedy world of mystics, mediums and seances to comprehend the reality and reasoning of mortality.

The one-man play is set within the dramatic space of Houdini’s dressing room. An area of intense privacy, the audience begins to understand how the world of Houdini revolves around this same setting. The mere props of a desk with a framed picture of Houdini’s mother, a table and a chair are expertly used by Killerby to illustrate scenes where Harry is recollecting facets of his life. Barry Killerby’s Houdini is filled with conviction; his erratic movements and his auditory tonal shifts perfectly highlight the vulnerability behind the façade of fame. The internal self is exposed to the audience through the breaking of the fourth wall with Killerby as Houdini addressing the audience numerous times throughout the play.

Houdini is presented with daring flair. Killerby does not hold back in highlighting the demons that haunted Houdini throughout the length of his career. Houdini speaks of how, in the dressing room, one ‘had a brief glimpse of who I really am’. Being punched by an elusive individual thrice in the abdomen after joking around questions concerning the Bible and Christ, Houdini proceeds to explore his public immortality and how it has not provided him with answers over the death of his mother. The mother figure is a recurrent motif throughout the play; it offers Houdini periods of exacerbated confusion about his inability to communicate with her, despite his status as an expert magician. Scenes of Houdini performing are always pervaded with a question he asks the audience in the first act of the play: ‘Is it possible while performing to pertain this freedom via supernatural force?’ What we see is Houdini attempting to achieve freedom from his mortal self; to transcend the material realm to access the supernatural, and his mother is a driving force behind his efforts.

Within his monologues, we begin to see the scorn that Houdini had for figures such as Sir Arthur Conan Doyle who were prominent figures of the Spiritualist Movement of the late 19th century and early 20th century. Spiritualism was based on the principle that one can communicate with the spirits of the dead. The transcendence of the material and the spiritual barrier was aided through a medium, which is trivialised by Houdini through a comedic interjection where he plays the role of a mystic aiding a mother attempting to contact their dead son. The hyperbolic presentation of the mystic and the use of lighting to highlight the deceptive tactics employed by mediums is testament to Houdini’s hatred for trickery and emotional manipulation for monetary gain. However, the scene has an underbelly of the inner turmoil that infects him; his search for truth leads him to fall into a one-man crusade against the Spiritualists and this is portrayed with the vivacity of Killerby’s acting.

The Last Act of Harry Houdini is a tempestuous journey through the perennial questions that plague the mortal being. The search for understanding the ills of mortality is depicted with raw power. The troubles of Houdini – from the death of his mother to his public image of immortality – all fall into the stunning conclusion of his last act, his defiance against the immortality he has been associated with. Killerby’s solo performance concerns the understanding of the self within the last moments of mortality and shows the audience how mortality plagues all, regardless of public renown.