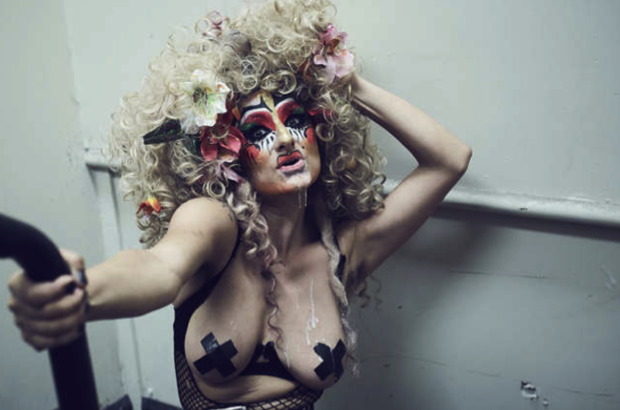 Safe Place is fundamentally a show about the relationship between radical feminism and the transgender rights movement. This is represented by the interplay between Martine (Jennifer Black), a feminist writer and long-time campaigner for women’s rights who believes she has ‘earned the right to some respect’, and Rowan (Shane Convery), a young transgender woman who turns up at Martine’s house in the middle of the night expecting a safe place to take refuge from the streets. Rowan’s plan falls apart when she finds that the feminist figurehead she had searched for to protect her is a ‘terf’ – a ‘trans exclusionary radical feminist’. This begs the question: is it possible to ‘earn the right to respect’ if you do not grant basic respect to others?

This is essentially the crux of the play; much of the action lies in the conversations that ensue. Black and Convery act their parts with brilliant sensitivity; the script is incredibly well balanced, giving space for Martine to express transphobic clichés without becoming a complete monster, and giving equal space for Rowan to be a bit brattish – despite being the victim of numerous personal attacks. Both characters are rounded, with full and believable back stories – this means that the dialogue is sustainable for the hour-long piece, and prevents it from becoming one-dimensional or lecture-like. The play does not in any way condone transphobia – that is blatantly clear. What it does do is assess our ‘entitlements’ in the ways we treat one another, i.e. Martine has worked for 20 years in a women’s refuge and 10 further years for a women’s aid charity – supporting countless women through the darkest periods of their lives. The play works to break down her preconception that because she has done good for those ‘real’ women, she doesn’t need to try harder. She feels she has done enough – and that is damaging. Damaging to her unlikely friendship with Rowan, but also to her career as an activist.

Though both Convery and Black act excellently, it is hard not to notice – on further inspection of the cast list handed to us on the door – that Rowan appears to be acted by a cis male, or male-presenting individual. It is an interesting casting choice given the political climate of the play, and one that leaves a slightly odd aftertaste. He acted brilliantly, but if he has no experience of either womanhood nor gender dysmorphia, would it not be more fitting to cast a trans actor/actress in such a piece? Regardless – the play presents a difficult relationship, on both a personal and political level, through conversations that more of us should be having. It is a well-written, de-constructed argument.

At first glance, Scene appears to be a monologue. It opens with Ayo (Saskia Ross) speaking at length about the complexities of being a mixed-race woman in modern Britain — but the scene is soon interrupted by Flo (Laura Cameron) for dragging on too much. It becomes immediately evident that Flo and Ayo are a couple, rehearsing a play that they have written together and will be performing together, about themselves. The monologue was just a part of this, and an early indication of their tendency to cut each other off – or more specifically, of Flo’s tendency to cut Ayo off. It is sweet in the moments they are ‘acting’ out the early days of their relationship within their play, but when they are rehearsing together and looking back on how they perceived one another, tensions begin to show. It is a frank and wholesome tale of two girls in love, which also raises questions about whether their racial, familial and artistic differences are too great to simply turn a blind eye to. Ross and Cameron handle the roles with maturity and the audience instantly warm to them both – in spite of their characters’ flaws.

The arguments begin to surface when Flo demands to remove scenes that paint her in an ignorant light, as well as suggesting cutting some of Ayo’s longer speeches about racial issues, because that kind of content ‘will not draw a crowd’. Flo certainly comes off as ignorant at times, asking to touch Ayo’s hair in the smoking area of a club on the first night they get together, for example. Her incapacity to identify these tendencies within herself is exasperating, and Ayo’s frustration is valid. Ayo’s sense of ‘otherness’ isn’t optional – and so when she sees Flo ‘drunk off queer spaces’, seeing herself as equally ‘other’ too, she finds it hard to digest. It is another piece, like Safe Place, that assesses complacency, or even complicity, in the face of discrimination.

The play is beautifully – and semi-autobiographically – scripted by Lola Olufemi and Martha Krish, and its dissection of gender, race and queerness has a level of honesty and intellectualism that is remarkably rare in a two-woman show. It’s impossible to pick the autobiographical elements from the show per se, but the tenderness that pervades even Flo and Ayo’s arguments feels incredibly raw. It is an accomplished piece of theatre, for one so simple.

Betty Grumble’s show begins with her reimagining of a ‘lip synch’. She bends over, throwing her skirt up to reveal two massive cartoon eyes stuck to her bare derriere, and then thrusts her genitalia directly out toward the crowd. Minnie Riperton’s ‘Loving You’ begins to play, and she uses her hands to create the impression that her labia are singing. It is completely startling – but also hilarious. This really sets the tone for the rest of the piece; though she is a ‘clown’, she comes bearing a potent and significant message: female body positivity, sex positivity and self-love. Significantly, too, we get a real sense of Grumble’s personality – in a way in which clowns don’t usually disclose. She discusses her body-building mum, who she insinuates is not comfortable with what she does – and how a political battleground has been made of each of their bodies as a result. She then proceeds to get into her mum’s skimpy old competing costume, pubic hair barely hidden by the fabric, and performs a dance routine making a mockery of the both of them and the way they view each other. The show isn’t accusatory at any point; it merely investigates the structures in place which prevent women connecting with themselves, or with others.

Though her vision of what the piece is meant to look like isn’t abundantly coherent or apparent (readings of Valerie Solaras’ SCUM Manifesto are interspersed with pieces of physical theatre of which she states ‘technically if the police arrived now it would be a sex act, but it is actually poetic’) the overall sense given is of intense but chaotic goodwill to dismantle patriarchal systems, and the audience have tremendous fun whether they look for the poetry or not.