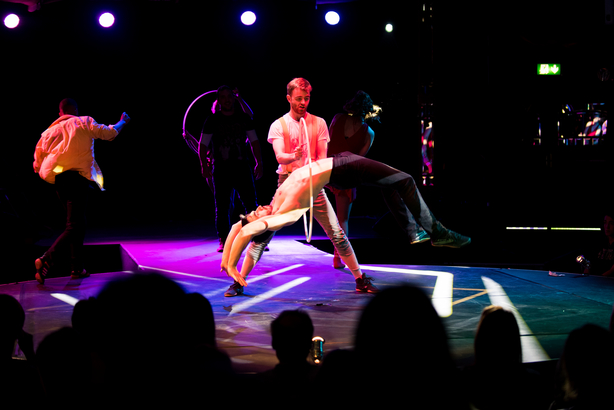 As a species we have always been unshakeably obsessed with story telling: from cave-paintings to blog posts to psychotherapy, our compulsion to know and be known has been unceasing. It often appears to be what makes us human. Throwback at Jacksons Lane, the Haringey arts and cultural centre with a well-established track record for staging exciting circus theatre, advertises itself as ‘an ode to memory and music’. It is exactly that – and joyfully so.

Throwback depicts true stories from the cast members’ past, with music and physical theatre stepping in where words will not do, to tell us something deeply personal about each of them. Think Humans of New York, but instead of an image with a piece of text, we are given a conversation and a dramatic performance. Tom Ball tells us about weird stuff he did as a kid (trying to set a dead crow on fire, but finding it ‘too greasy’) before taking to the trapeze in an equally astounding and playful routine, accompanied by Rusted Root’s ‘Send Me On My Way’ (cue appreciative ‘aww’s from the audience members familiar with the film ‘Matilda’). LJ Marles’ hands are suddenly full of aftershave bottles and he tells us about how each smell reminds us of a different event or moment from his life. Whilst this is going on, other cast members are spraying scent into the audience. Later Marles takes to his aerial straps in a gravity-defying performance — and though this feat has no direct narrative link to his story, we are so mesmerised we simply don’t care. In fact, the stories seldom link directly to what we see in front of us: Alice Gilmartin and Ulrike Storch’s narratives seem far removed from their graceful handstand and foot juggling routines; but their personalities permeate their performances and in turn, the performance seems to tell us something about them.

What is most astonishing is the safe space that Paulette Randal and Simon Pollard have clearly created not only within the cast, but in the theatre as a whole. When the audience enters, the cast walk among us and chat and they often stand up the aisles either side of the seating during the show. There is a little note on each chair when you enter the theatre, on which is written ‘Write down a song that reminds you of your childhood. Make a paper aeroplane, and throw it at the stage when we say go!’ And the cast begin the show by collecting in all these notes and singing our song choices back to us, before moving on to discuss their own. It is chaotic, but completely joyful and allows the audience to ‘ooh’ and ‘ahh’ without it becoming too pantomimey. As a result, there isn’t really a fourth wall to break. This is especially exciting given the exposing and nerve-wracking nature of the cast’s work: not only are they literally putting their lives in each others’ hands at times, but they are baring all to them – and we are invited in to join them. It is particularly poignant to watch the stories that are more difficult to tell: Craig Dagostino discusses his past infidelity with frankness and candour; Sammy Dinneen discusses the sacrifices his mother made for him when he was young. In these cases, we can see that a magnificent physical feat, like handstands or pole work, are less daunting than telling the truth at times.

Throwback may not have the polish of a state circus, nor of a traditional play – in fact, it was somewhat shocking walking in to see the cast all in jeans, hoodies and generally casual attire throwing themselves through hoops and up poles. What Throwback does have is heart. Its heartfelt commitment to telling truths is incredibly welcome in a time in which in which ‘alternative facts’ render honesty a political act. Throwback’s insistence on telling an ugly truth is made beautiful, not only by the accompanying circus acts, but in the very insistence itself.