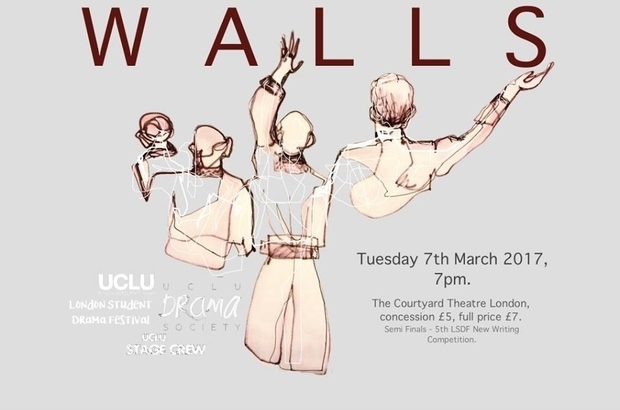 URI INSPECTOR discusses UCL’s original production Walls at the London Student Drama Festival, in the first of a series of reports on the show’s progress.

‘Dear Mr Prime Minister David Cameron of UK’ says Ali, an Afghan refugee, ‘Jungle is not for humans it is just for animals. If your sons living here in Jungle what you think?’ Ali is surrounded by a sonorous array of vocal and instrumental melodies, harmonising and clashing, soothing and tense. This is daybreak in the Calais Jungle. Thus opens Walls, UCL’s input for the London Student Drama Festival this year. The true story of Ali’s attempt to reunite with his brother in England is paralleled with that of Anna and Julia, two German sisters struggling against repression in East Berlin decades earlier. The brilliance of Walls lies in its creation of vivid atmospheres through experimental uses of physical theatre and music, accompanied by a hard-hitting political message. The play throws the audience into Calais and East Berlin by all their senses, encouraging a strong affinity with the protagonists while delivering a damning verdict on our society’s negligence and comparing the chaos of 20th Century Europe with the refugee crisis.

The piece is a wholly collaborative effort, lead by writer Amy Reade and director Florence Woolley, but formulated democratically with the help of an incredibly versatile cast. Each rehearsal is an electric confluence of creative minds, the team constantly experimenting with new ideas and methods. The challenge of physical theatre, Florence says, is that it involves an important preliminary period of testing and learning what is effective, and what the cast can do, before the play can take its full shape. For Phoebe, who plays Anna, approaching Walls as opposed to a more traditional play demands a broader view of how the whole piece looks rather than merely considering one’s own individual performance; the cast become directors and writers in their own right. From the production’s inception, auditionees were rigorously selected through a workshop which tested their creativity and particular skills, in order to create an ensemble that can both collaborate with chemistry and bring their individual talents into play.

Amy and Florence, hometown friends, have worked together in the past, both being schooled in physical theatre by the same directors at the Bristol Old Vic Young Company. While Walls is a hugely imaginative work of theatre with an emphasis on instinctive improvisation and devising, it is rooted in both historical fact and personal experience. Both writer and director spent months volunteering in Calais last year, where Amy set up a theatre with the charity Good Chance. Her writing is informed by her experience meeting and working with refugees. The production also seeks to alleviate the flaws and misconceptions in other artistic takes on the refugee crisis; the production team want the audience to ‘avoid the idea of just pitying people, and find a new way to tackle the crisis’. Florence and Amy both stress the importance of the cast’s wider education on the play’s central issues; the actors and musicians are constantly encouraged to get involved in the Student Action for Refugees Network and attend talks and exhibitions.

The London Student Drama Festival is a perfect place for this production, Florence says. There it’ll be able to ‘inform a variety of people from different universities and different political persuasions’ and get more ‘young people to engage with politics’. When asked whether she thinks theatre has the power for political change, the director responds with a passionate ‘yes’, asserting that it and other art forms are some of the best means for inciting change, but the inaccessibility of theatre limits its potential. Walls places a crucial responsibility on the audience; after witnessing the real struggles it portrays in such an immersive way, it is then incumbent on all of us to put an end to them.

Walls will be playing at the semi-finals of the LSDF on 7th March at the Courtyard Theatre.  Find out more here.

See Uri’s later report on Walls’ progress, as well as his review of the LSDF final itself: