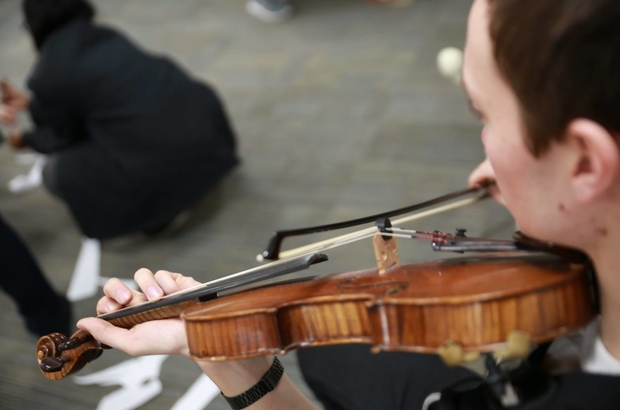 Times of crisis often bring into question the importance of theatre. Writers and directors can doubt their role in situations that must be approached pragmatically; art can’t literally feed, clothe or give asylum to the displaced. Upon reaching Calais with the intention of setting up a theatre there for refugees, Amy Reade, the writer of Walls, was struck with this sense of powerlessness. ‘When I first came’, she tells me, ‘I thought, these people need lawyers not drama teachers – I can’t get them into the UK’.

Yet after spending more than half a year working with the camp’s inhabitants, as well as with refugees in the UK, she realised the true impact theatre had on their lives: ’The space we created in Calais wasn’t just for theatre but for self-expression as a whole. People would come in to dance, to paint, even to light fires. It didn’t matter what they did – they were expressing themselves’. Drama served as a liberating outlet for Calais’ refugees, helping them reclaim a sense of hope beyond their struggle. Amy recalls a piece of theatre she co-ordinated in the camp which involved a mock trial on the demolition of the Calais Jungle. One child played a judge while the others took turns to give testimonies. Nowhere else in the camp could they have expressed their opinions and emotions in such a way. ‘Yes, people need to eat’ Amy continued, ’but beyond that, they need something to live for, something that makes them feel like a human being again.’

And it is this humanity that is at the core of Walls. In his opening monologue, Ali, an Afghan child refugee, states ‘I want to be the best version of myself’, a moving line found in a real letter to the UK government from a someone in similar circumstances. This, alongside Anna and Julia’s struggle in East Berlin, is as much a call for the liberation of the individual soul as it is for British politicians to snap out of apathy. Reading the news, Amy says, the public are exposed to ‘faceless images’ which retract the human aspect of the crisis. Walls can give the audience an insight into what the news cannot.

Though pairing modern Calais and 1980s East Berlin, Amy stresses her intention not to slip into a simplistic comparison between these two, very different and complex milieus. What unites them are the children who journey through repressive environments to overcome a wall of some kind with an unhampered sense of justice and a yearning for self-actualisation. The play’s final scene sees the fall of the Berlin wall next to a fire in the Calais Jungle; a momentous symbolic image of hope is coupled with devastation. Amy asserts the importance of this in communicating the disparity between the elation of 1989 and the dejection of the current refugee crisis. Walls informs us of our ‘perpetual inability to deal with crises’.

When asked about the importance of physical theatre in the piece, Amy affirmed her strong belief that theatre should be visually striking. ‘We set out to devise atmospheres of movement and sound and to take ambitious risks’, she states. ‘Even if the process is difficult and much more time-consuming, these risks are worth it to create something more effective than your average play’. Moreover, physical theatre helped the cast and crew to overcome certain challenges in presenting environments so alien to Gower Street in 2017. ‘Calais is erratic. Hundreds of languages are spoken, and the way people behave is far from what you’d expect, as we see in Walls’ she states. The use of movement, improvisation and soundscapes allowed Amy and her team to evoke the ambience of an incredibly complicated place. Movement in Walls becomes a universal language, with the human body, and the shapes and sounds it creates, as its alphabet.

Along with personal experience, Amy lists Lampedusa (2015) by political playwright Anders Lustgarten and Fabio Geda’s novel In the Sea there are Crocodiles (2012) as inspiration for Walls. The former similarly deals with the refugee crisis and employs the dynamic of two distinct simultaneous narratives. The latter details the journey of an Afghan boy to Italy, which struck Amy for its matter-of-fact writing style, which she felt reminiscent of the way in which she heard refugee children talk in the camp.

Both informed Amy’s writing, but she stresses the role of director Florence Woolley and her cast in constructing the play. University, she believes, is a time to experiment with ideas, to be creative and to work with others and this is what excites her about the London Student Drama Festival. ‘London is full of universities and creative institutions. We are a centre of education, surrounded by students’. She believes that the festival is an opportunity to escape the insularity of our separate establishments and ‘to be exposed to what other students want to say with their theatre, right now, and to engage young people with what we want to say: in the case of Walls, a very important, ongoing problem. We are the next generation of theatre-makers.’

Walls played at the LSDF Finals on 20th March where it was given the Best Director award.

See Uri’s first report on Walls’ progress, as well as his review of the LSDF finals:

Walls – From Calais to Berlin