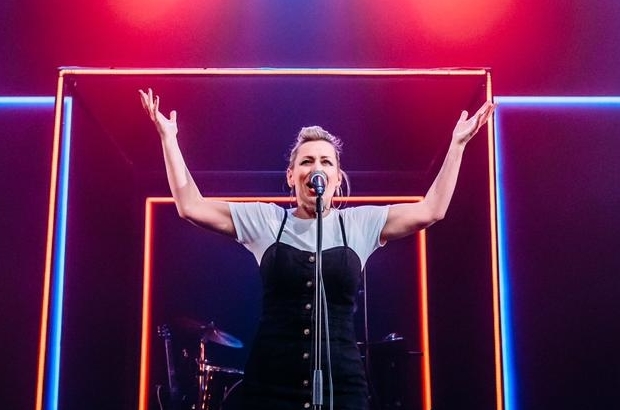 Thousands of musicians have nearly made it, only to be forgotten seconds after they crash out of the music industry. Cora Bissett’s ’90’s indie-rock band made it closer than most, but the ending of the band’s story is still the same. Twenty-five years after Darlingheart were dropped by their record label, the lead singer Bissett has recorded her journey from teenage rocker to forty-something mother in this impressive play. Directed by Orla O’Loughlin, and currently at the Soho Theatre before going on to Sydney to wrap up its world tour, the one-act, ninety minute whirlwind elicits both audible laughter and audible sobs from its audience.

The cast of four is simply incredible. All responsible for playing the demanding live music required for the show, often in character as members of well-known British bands, they carry off their roles with ease. Harry Ward earns a special mention for his effortless multi-role, playing characters as disparate as Bissett’s mother and their seedy manager, Dirk Devine (his real name is not disclosed) with apparent ease.

The piece as a whole is a discomforting addition to the autobiographical genre, not because of its honesty, or the presence of the real protagonist in the lead role onstage, but because of its modernity. Our generation is not used to seeing their lives played out in front of them, yet most uni students and twenty-somethings can recall the glory days of Radiohead and Blur, both of whom Darlingheart toured with on their respective journeys to global success.

This unease is increased by the lack of a neat ending. The overly sweet song with which the play concludes lists many of the things girls are made of, from sugar and spice to go-karts and mud-pies. Ostensibly aimed at her infant daughter, Bissett’s closing tune jars with an adult audience able to identify the hollowness of the optimism it carries. Girls may be made of anything, but they will still face versions of the challenges the show has detailed.

Oscar Wilde spoke of the nineteenth century dislike of realism and romanticism as “the rage of Caliban seeing his own face in a glass” and “not seeing his own face in a glass” respectively in his novel The Picture of Dorian Gray. This text is not instantly comparable with Bissett’s play, but both chart a young person’s unpredictable ascent in a world they had only dreamed of previously. They each document the near-inevitable falls of their protagonists, too. Perhaps the discomfort in the ending of What Girls Are Made Of can be compared to the rage, or rather disappointment, of Caliban realising the inherent unreality of his reflection.

Of course, we can’t be given a neat ending when the story is still ongoing. Bissett does not know what happens next any more than we do. This further blurs the line between the production and the audience, and ensures we leave the theatre with a lingering interest in the protagonists’ lives.

Poignancy has other roots in the show, however. Twenty-five years after the events which occupy the bulk of the play, Bissett was prompted to write the piece when she rediscovered some contemporary documents in her parents’ attic following the death of her father. The language throughout the play is unusually rich, with props, costumes and scene changes rendered almost unnecessary by the absorbing descriptions. In particular, the way in which Bissett talks about her father’s journey with dementia is incredibly raw. Littered with cliches, including how the disease turns men back into boys, these moments in the play avoid seeming hackneyed or distant due to the intensely personal nature of the writing. These scenes seem to be the product of a cathartic act, but this serves only to increase their emotional impact.

Unsettling, heart-felt and inconclusive; Cora Bissett has distilled the ‘90s grunge and rock era into a single play, and introduced a generation to the unnerving feeling which comes with seeing things you recognise from your own life represented as history before you.

“What Girls are Made of” runs from the 9th to the 28th of September at Soho Theatre, more info here.