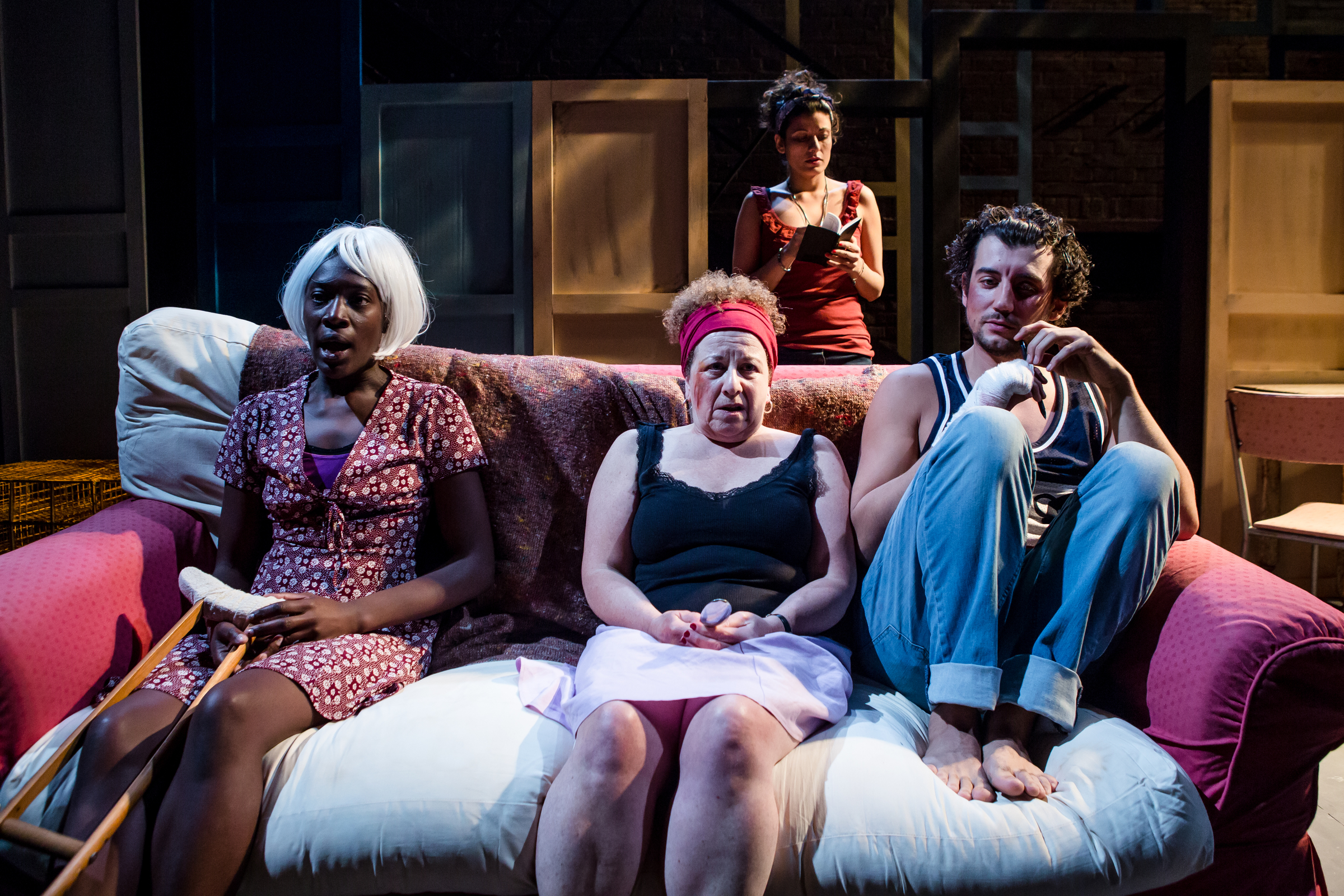 Sitting on the sofa of a shabby flat in a nondescript Cuban neighbourhood, the Sanchez family is waiting patiently. Today, says the grandfather, a package will arrive; a package he has been expecting for 42 years.

Roland Schimmelpfennig’s ‘Ant Street’ is a story about escapism and what happens when you get something you have always desired. Translated into more than twenty languages, German playwright Schimmelpfennig, the winner of the prestigious Mülheimer Dramatikerpreis, is apparently one of the most produced contemporary playwrights in Europe. ‘Ant Street’, with its similarly universal appeal, seems like a perfect choice for the Arcola’s VOLTA International Festival; a celebration of contemporary international plays performed in English by British actors.

The Sanchez family are dreamers longing for an escape from their humdrum existence. The mother (Amber Aga) and grandmother (Nicky Goldie) have an almost religious devotion to their favourite telenovela, the daughter (Ony Uhiara) spends hours imagining herself as a giant as she watches ants building a nest in the kitchen, while her boyfriend (Jack Gordon) loses himself in great poetry. They often pass the time daydreaming about the contents of the grandfather’s mysterious package; so, when it finally reaches them, they are devastated to discover its contents. A disappointingly mundane assortment of objects: a spoon, a wig, a blank diary, a pen and an empty jar of mustard wrapped up in an old newspaper…until they inspect them a little more closely.

Turning the pages of the diary, the mother finds that it’s filled with long-forgotten events. The daughter puts on the wig and floats up to the ceiling, while her boyfriend writes beautiful poetry with the pen. The spoon tastes of a thousand delicious flavours and the jar, when filled with liquor, becomes bottomless. Finally the newspaper, which before seemed to be written in an indecipherable language, now reads ‘The Sanchez circus comes to town’.

The play has a dreamy quality that is quite intriguing. Just as the family begin to experience their little world with renewed, childlike wonder, the audience is drawn into this modest little tale. We immediately see what will happen as the characters begin to obsess over their magical objects; like the little streets of ants in their kitchen, which scatter when a crumb is placed in their path, the family’s unity is compromised as soon as the extraordinary enters their everyday.

All of the characters narrate the story together, and the plot has a pleasing predictability to it that is reminiscent of a children’s bedtime story. Indeed, at times I felt as though I was watching a kid’s show, albeit one written by Gabriel Garcia Marquez. Schimmelpfennig is clearly fascinated by the tension between realism and fantasy in a childish imagination. The characters are all adults, yet director Amelia Sears has her actors play them with a childlike innocence, pulled off particularly well by Ony Uhiara as the daughter. The audience is left wondering whether they’re supposed to believe the story, or whether telling it is another form of escapism.

The play’s neat metaphors are all tied up with a kind of Aesopian moral clarity. The Sanchez family, torn apart by their magical possessions, learn that they can have too much of a good thing. The diverse cultural influences in this play—a tale set in Latin America, written by a German playwright and performed for a British audience–highlight that its themes of escapism and desire are universal. Just like Aesop’s familiar fables, we feel as though we’ve heard this tale, or a version of it, a thousand times before.