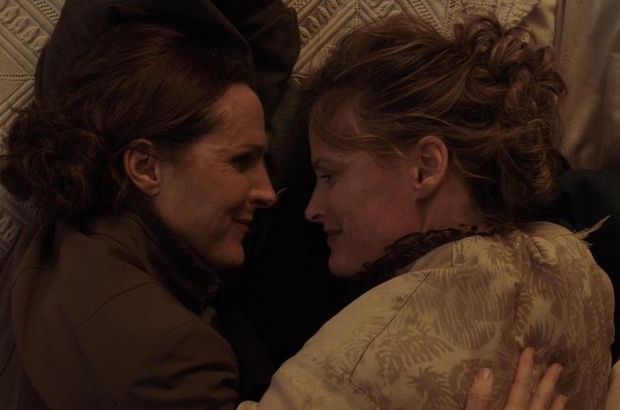 Completely subverting the clichés surrounding its eponymous poet, Madeline Olnek’s witty comedy about the life of Emily Dickinson holds an important feminist undertone. Wild Nights with Emily is an entertaining albeit outlandish film, which highlights the much-needed rebranding of the famous literary figure. Mabel Todd’s (Amy Seimetz) fairytale-esque narration provides a continual reminder of the prevailing view of Emily, as a social hermit ‘who never went out and saw no one that called’. Todd reminds us to challenge any presupposed ideas we may have of the renowned poet. This quirky and unexpected film makes for an increasingly enjoyable watch, as the audience familiarises itself with the eccentric performances from the main cast.

Wild Nights with Emily begins with jaunty violin music, which announces yet another period drama – a genre to which we are now well accustomed. But what makes this film unique is the sudden and almost slapstick introduction of a lesbian love affair between Emily (Molly Shannon) and her childhood friend, Susan (played brilliantly by Susan Ziegler). Mabel Todd starts the film by stating: ‘too much has been made of late, of her girlhood friendship with her brother’s wife, Susan’. In humorous contrast, Emily and Susan begin passionately kissing and end up tumbling behind the sofa in an almost pantomime style. Olnek’s film is introduced as a goofy comedy set against a story of forbidden love.

Throughout the film, Dickinson’s poetry is cleverly included in speech or in graphics, with bold reinterpretations of some of its most famous lines. ‘I taste a liquor never brewed’ is thus read as the experience of a lesbian in 19th-century society – rather than simply about drunkenness and summer, as goes the traditional reading of this poem. In a scene where Emily allows Susan to read her poetry, the latter is annoyed she has been directly named, as it takes the risk of exposing their relationship. Such a relationship might not have been all that fictional when considering a real letter written by Emily to Susan in 1852, in which she writes: ‘I need you more and more…my heart is full for you’. Comments such as ‘her breast is fit for pearls, but I was not a diver’ in Dickinson’s poems further the possibility that the film is based on truth; that Emily and Susan were more than just friends.

The cast’s exaggerated acting means that the opening scenes are endured somewhat uncomfortably. That is until you realise that this parodic style is, in fact, a way to convey the struggles of being both female and a radical figure in 19th-century America. It is also used more widely to show what it means to be a woman in a starkly patriarchal society. A craftily-written scene sees Emily rambling comically for hours on end as she meets with her editor, Thomas Wentworth Higginson. Despite its light-hearted aspect, the sequence addresses crucial issues of age, gender and the subjective nature of poetry. Emily’s sarcastic comment, ‘how burdensome to judge whose writing has merit’, depicts the unfairness and sexism of the publishing world.

Out of 1175 poems, Emily only saw 11 published in her lifetime, largely to do with her testing of the conventional boundaries of poetry of her time. The film accurately portrays this experience of injustice. In the same scene, Higginson scribbles out many of the lines Emily shows him, explaining that they make him ‘feel unclear’ and in any case, don’t reflect the ‘motion recollected in tranquillity’ that poetry should aspire to be. This scene also indicates a wider prejudice for women, expressed in Higginson’s hilarious lament: ‘we need to hear intelligent women’s voices but I am barely able to find any’.

Olnek’s film, although parodic in nature, touches upon the dangers of representing women like Emily Dickinson as the ‘needy spinsters’ of history. This habit only serves to undermine female achievements in literature and other male-dominated professions. Through the comical reinvention of the poet’s works and personal life, Wild Nights with Emily deftly challenges gender and historical stereotypes.