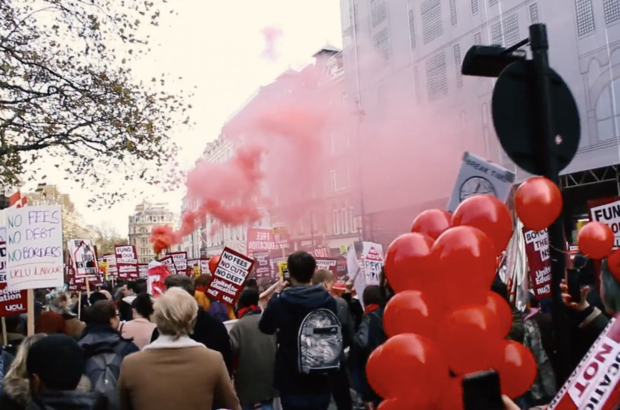 ETHAN RHYS-JENKINS’ short is a punchy and enlightening advert for the Rent Strike protest. He is in conversation with HASSAN SHERIF to explain where the film fits into the larger movement, and where the movement itself is currently headed.

With Cut the Rent’s Free Ed demo racing towards us on 15th November in London, we revisited Ethan Rhys-Jenkins’ short, ‘Rent Strike’, which documents the student effort during last year’s movement. ‘I was working very closely with Rent Strike at the time’, he explains, ‘so this is my contribution to them – a sort of advert/infomercial just about the campaign, which is in dozens of other universities as well. The idea was to have this floating around, spreading the word.’

As a first year student, I was not acquainted with quite how widespread the multi-university movement really is. Ethan’s film (as well as Selma Rezgui’s article last year) pinpoints the massive successes developed over several years of action, amassing over £1.49 million in concessions from UCL alone.

While this certainly sounds like a huge success to a Rent Strike newcomer, Ethan explains that the movement will not be dying down anytime soon: ‘the rent in London is only really getting higher. Especially at UCL you notice there are halls that are being refurbished. As they are made nicer the price goes up, so regular people basically get priced out of studying in London. The idea that your choice of uni is determined by how much money you have rather than your desire to learn is something we don’t agree with. There’s still a lot of momentum and energy, because if we don’t keep an eye on things there’s a chance that it will all slip back into the way it was before. That’s why I think Rent Strike is such a good movement, because nobody else seems to be paying attention to this stuff. We need someone to basically scream about it, to stand up and get it noticed.’

There have been concerns that as Rent Strike grows in strength, the organisation has merely become an aggressor, fuelled by new members who refuse to pay for the facilities offered to them just for the sake of it. Ethan easily corrects this notion. ‘From the start, we entered into discussions with management before we went on Rent Strike – it was never a first resort. We’ve had to turn to it for the students who are pushed away from learning.’

And the movement entails more than not paying rent – Ethan draws my attention to the various ways students can get involved: ‘as well as loads of demos around campus and national ones like the one next week, there are lots of petitioning to hall management. What I liked most about Rent Strike was the fact that they just had a pretty welcoming and cool vibe about them. There’s a lot of active groups around the country, but everyone here was especially dynamic and from all over the place.’

As a film in itself, Ethan’s short is engaging and punchy, mirroring the determination and passion that go hand-in-hand with the subject. The professional standard meant that Ethan’s film wound its way onto an ITV News story, to the surprise of the filmmaker himself. ‘My friend came into the common room a couple of weeks ago and said, ‘Oh, Ethan, well done on getting the film on TV’, and I didn’t know what the hell he was talking about. It’s quite cool, but I wouldn’t have minded hearing about it a bit before than three months afterwards.’