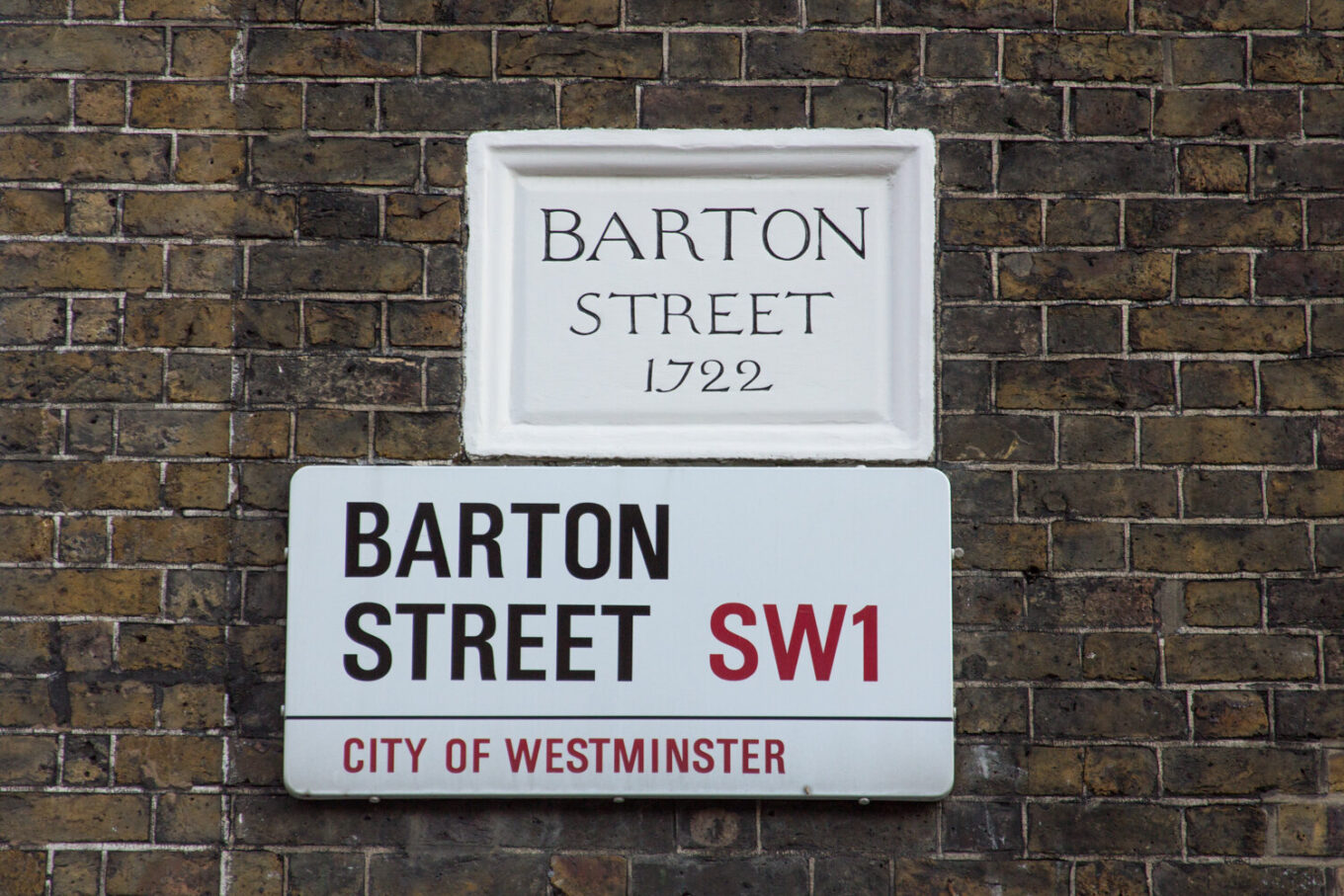 For those who are unfamiliar with London – or who, like myself, tragically lack any sense of direction – the city’s street signs can be a flurry of inscrutable symbols. On the other hand, long-time Londoners seem to know every street sign by heart. Either way, no one usually pays much attention to these signs, let alone sees them as aesthetic objects. This indifference is what art director and author Alistair Hall strove to challenge in his enriching talk about his latest book, London Street Signs, which was scheduled as part of the literary programme for this year’s Bloomsbury Festival.

Hall has spent the past four years researching and photographing street signs across London. Throughout his webinar, Hall shared his expertise and invited us to appreciate the historical value and subtle beauty of our capital’s street signs.

According to Hall, London street signs can be categorised into three types: tablets (carved in stone), nameplates (made of porcelain or enamel), and hand-painted signs. In order to gather information on a sign, the passer-by has to undertake some detective work. Hall took us through various ways to date street signs: there’s the rather obvious solution of checking the street name or the date of the building, but this method can be risky, as street names change over the years and many signs are no longer attached to their original building. Alternatively, one can make an educated guess based on the type of the street sign, as nameplates started appearing from 1847 onwards while hand-painted signs were popular in the 1850s. The most dedicated street sign sleuths (like Hall himself) can also peruse various archives of London, but are bound to find bewildering historical gaps in the data. As is often the case with research of any kind, a certain degree of guesswork is necessary. It may be tempting to stroll through the streets of London, examining signs and trying to reconstruct a history of the city, but time travelling through street signs is a messy affair; for instance, it’s possible to stumble upon buildings with all three types of sign on them (a tablet, a nameplate, and a hand-painted sign). As Hall puts it, this is a case of ‘history piling on top of itself,’ forming layers upon layers of sediment through which curious observers must dig their way.

History, as we often forget, rarely comes without a sense of humour. Using examples from his photographs, Hall explained that some London boroughs were determined to create a design that was unique to them, and this was exactly the case for the City of Westminster. Ironically, Westminster’s style became so iconic that several other boroughs started adopting it for their own street signs. Throughout the history of London, there have also been attempts to copy the style of older, more ‘traditional’ street signs: this stylistic choice makes it even more difficult to date some signs, as it becomes unclear whether they are originals or mere imitations.

Some street signs are adorned with original touches such as pointing hands, masks (for streets in Theatreland), or even Mandarin characters for streets in Chinatown. Sometimes,  this originality was accidental. Tiles occasionally went missing during manufacturing, and we can find examples of when workers had to improvise – on the Willoughby Road street sign in Hampstead, it is (amusingly) obvious that a ‘Q’ has been used in lieu of an ‘O.’ Upon closer inspection, certain signs appear to be written in slightly uneven fonts: the difference is minute, but just visible enough to be unsettling. For Hall, the devil is in the detail, and he even jokes that this kind of oversight may set us on a slippery slope to having our street signs written in Comic Sans MS.

All jokes aside, Hall wholeheartedly celebrates the variety of London street signs. These signs may have been used as tools to organise the city – to try and unify it into a coherent whole – but, not unlike London’s inhabitants, their peculiarities and diversity resist efforts to establish any semblance of uniformity. ‘We all have this inherent wish for everything to be unified and clean,’ Hall argues, ‘but we wouldn’t have this wealth of variety if we’d just followed the guidelines.’

On the other hand, Hall laments the fact that many newer signs are ‘badly made’ because the loving craftsmanship that used to go into their creation has been replaced by automated processes. For Hall, street signs are a form of urban art, but there are very few who share his point of view. He did not go unnoticed as he stopped in front of buildings with his camera whilst conducting his research: Hall recalls shopkeepers being vaguely suspicious, and corporate businesses sending security to enquire what he was doing. When he explained himself, they retreated warily, baffled by his answer.

The research that went into Hall’s four-year project admittedly demanded an extraordinary amount of passion and dedication. Not everyone has this kind of enthusiasm for street signs, but perhaps it is not too much to ask to give them a bit more appreciation, or at the very least, attention.

In honour of the Bloomsbury Festival, Hall’s talk ended on a virtual tour of the Bloomsbury neighbourhood. While it is obviously not the same experience as strolling through the streets of London, his photographs really do justice to the neighbourhood – from the pristine milk-glass street signs near the British Museum to the inscribed curbstones on Store Street. As a newcomer to London, I especially enjoyed his recommendations for must-see stops including the Sandwich Street Café on Sandwich Street, the King of Falafel deli in Tavistock Square, and the Queen’s Larder pub on Cosmo Place.

Based on this behind-the-scenes glimpse of Alistair Hall’s work, I recommend Hall’s new book, London Street Signs, to both new arrivals and seasoned Londoners who want to see their city in a new light. We rarely pay attention to street signs, how quickly they appear and disappear. Hall acknowledges that some of the signs he photographed have probably changed by now, while others may be gone forever. The story of London street signs never gets old; it is constantly changing and exists as a discrete – but charming – testimony to the city’s variety and mutability.