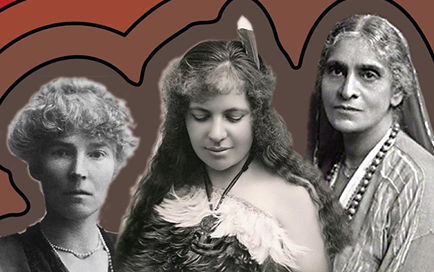 Set up by UCL graduates Chloe Tye and Lizzie Merrill, FemThinkDo is a feminist events company that promotes new and exciting feminist research by hosting talks, discussions and workshops. Committed to core values of accessibility, intersectionality and integrity, FemThinkDo offers a platform to promote voices from a variety of backgrounds, from authors and academics to activists and artists. Its aim is to help us incorporate feminism into our daily lives, promote new research and inspire activism.

As part of its March 2021 programme, FemThinkDo hosted Uncomfortable Oxford’s co-founders Olivia Durand and Paula Larsson for an incredible discussion called ‘Imperial Feminisms’. Uncomfortable Oxford is an academic-led organisation that spotlights stories of racial inequality, gender and class discrimination and imperialism, as well as exploring different feminist approaches to history and questioning traditional concepts of feminism and history.

The lecture tackled the question: what does it mean to be a feminist in imperial contexts? Durand and Larsson defined ‘Imperial Feminisms’ as feminisms that cross the boundaries of power, gender and empire, and the discussion centred around three women whose complex lives illuminate the relationship between feminism and empire.

Before launching into a thoroughly-researched presentation on Imperial Feminisms and an exploration of what we can learn by looking back at the lives of historical women through a feminist lens, Larsson opened the lecture by asking the audience to consider our assumptions surrounding feminism: what does a (historical) feminist look like? Mary Wollstonecraft, Simone de Beuvoir and Florence Nightingale were noted as being among the women we often think of when discussing feminist figures. Rather than considering the lives of such prominent feminist women, Durand and Larsson instead explored the lives of three women who are not usually spotlighted by mainstream feminist thought: Cornelia Sorabji, Gertrude Bell and Mākeret Papakura.

Cornelia Sorabji was one of the first Indian women to study law at Oxford. Upon her return to India in 1894, she became an influential legislator. Yet despite her incredible intelligence and academic record, she suffered from gender-based discrimination, and was alienated because she was a woman practising law, consistently denied paid work and forced to offer her legal services charitably; it was only in 1923 that she was recognised as a barrister, although her career remained largely pro-bono. Gertrude Bell, a British woman, came from an elite, wealthy background. As the Ottoman Empire fell apart and European forces showed an interest in dividing it up for their benefit, Bell was instrumental in negotiations through her knowledge of the area and ability to speak Arabic. Mākeret Papakura was a British-Māori woman who studied anthropology at Oxford, the second Māori student accepted to the University. Her thesis, published posthumously as a book entitled The Old Time Maori, considered topics that male scholars had largely overlooked, including menstruation, menopause and marriage rituals in Māori society. Each woman found ways to challenge the power structures of the British Empire, and manipulate it to their advantage; their complicated relationships with the empire offer interesting insights into how feminism worked in an imperial context.

After noting that the University of Oxford’s decision to admit women coincided with the expansion of the British Empire in the nineteenth century, Durand and Larsson offered the audience a detailed picture of how the British Empire was not just a ‘backdrop’, but rather ‘the context’ within which feminist movements developed. In other words, the empire was not merely a setting within which developments took place, but was the very means that enabled feminist movements to ignite.

Following an interesting exploration of the three women’s lives, Durand and Larsson asked us to question how their lives interacted with narratives of historical feminism, and how Bell’s story in particular represents the need for an intersectional understanding of feminism. Looking at Bell’s life as a member of an elite, wealthy family, Durand and Larsson stressed that feminism does not mean the same thing for colonised women in an imperial context; the empire gave Bell access to opportunities because of her class and race which were not offered to women in general. Larsson tells us that Bell’s controversial opposition to the Suffragette movement stemmed from her belief that other inequities should be dealt with before campaigning for suffrage, one of which was establishing legal personhood for women. Her understanding of ‘personhood’ was established through her imperial identity; it was the fact that she was an English woman, in addition to her class entitlement, that offered her opportunities to travel, explore and write. Her complicated relationship with her imperial identity highlights the importance of ensuring that feminism today protects and promotes the rights of all women, rather than solely women of a particular background.

The lecture concluded with an encouragement to remain critically celebratory of feminist legacies and to recognise the complexities of historical feminist figures and their lives. Larrson spoke of how white feminism is constructed around historical feminist narratives: feminism has become more transnational today, but the ‘agenda’ is still often ‘racist, ethnocentric [and] patronizing’, and tries to ‘rescue’ non-white and non-Western women. White feminism can therefore be used as a ‘cover’ for Western Imperialism today. Koa Beck’s White Feminism was recommended for more information on this.

The event was engaging and instructive, and represents a unique commitment to showcasing well-researched, intersectional feminist research. Through hosting such an interactive, informative and insightful discussion, FemThinkDo and Uncomfortable Oxford are doing instrumental work in showcasing fresh, unique perspectives on feminism and feminist theory.