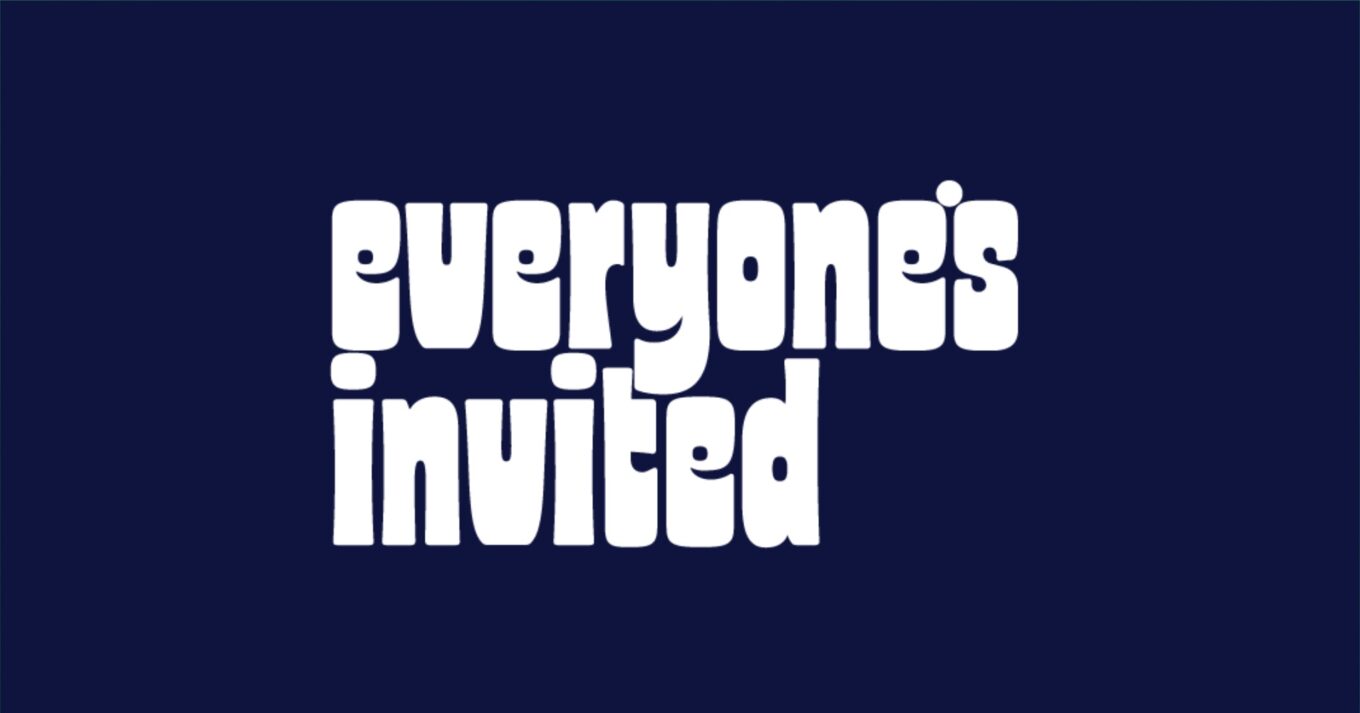 EVERYONE’S INVITED is a social movement combatting rape culture and sexual harassment, through education, testimonials and support. Its platform is a safe space for survivors, offering a means of empowerment, protest and healing, through the exchange of stories and resources, in order to enact widespread change.

Following Era Journal‘s interview with founder Soma Sara in 2020, GEORGIA GOOD spoke to the Head of Social Media, MADDY BLACK, to reflect on the movement’s achievements since then, and its visions for the future.

First, could you begin by explaining your role at Everyone’s Invited (EI)?

I’m the Head of Social Media. That involves managing the Content Team, and running the Instagram, Twitter and TikTok accounts. The Content Team is responsible for writing and researching the educational content we post on our channels. This work falls under the umbrella categories of sex education, rape culture, mental health, and feminism.

You’re a student at UCL, studying English. What drew you to get involved with Everyone’s Invited, and did your time at UCL play a role in that?

It’s hard to pinpoint what exactly drew me to EI, because it happened so quickly. I immediately thought, ‘Yes’, when I saw the ad. The cause resonated with me an enormous amount, and I felt all the more connected to it because it was founded by a UCL student. I actually saw the vacancy because Era reposted it on your story, so this is a nice full circle moment.

Era last spoke to Everyone’s Invited in September 2020, in an interview with Soma Sara, EI’s founder and CEO (and UCL graduate), by our Co-Editor-in-Chief at the time, Shanti Giovannetti-Singh. It seems like EI has achieved so much since then: you’ve published over 54,000 testimonies, amassed nearly 100,000 followers on Instagram, and been featured in major publications like The Times, Vogue and Grazia. Considering this, what have been the biggest milestones from your perspective?

The release of the Everyone’s Invited School List was a really significant moment. The School List is a compendium of every school mentioned in anonymous testimonies on rape culture submitted to our website. Two days prior to the release, Ofsted published their report on sexual harassment in schools, which essentially concluded that rape culture in schools is a serious problem. So, crucially, the results of this government report were totally aligned with what survivors had been saying. This was kind of unprecedented for us. So we then published this list of school names, which concretised the evidence in a very immediate way. The result was this reverberating public recognition that rape culture is real, it’s entrenched and we have to do something about it. This was a really pivotal moment for EI – a lot has happened from the ripple effect of that week. Of course, it all comes back to the bravery of the people who chose to submit and the collective force of their voices.

With all this growth, what plans do you guys have for the future?

The School List will be updated soon, as we receive more testimonies. We released a zine in early December, called ‘The Joy of Healing’, which is available to view on the Everyone’s Invited website. I think there’s a strong likelihood that we’ll do more creative projects of that kind.

Your #16daysofactivism campaign, in November 2021, was really powerful. It involved you holding interviews via Instagram Live with sixteen different activists, educators, charities and initiatives who work within the fight to end rape culture. Could you talk me through this initiative, and what stood out to you?

Finding guests was a fairly uncomplicated process. There were so many people and groups that myself and other members of the team had already encountered in the field, so we had loads of recommendations from the get-go. I’d encourage anyone interested to watch the interviews, which are on our Instagram – I don’t want to poorly paraphrase the very eloquent speakers! Phoebe O’Hara made some great recommendations of texts to help people develop a better understanding of systemic issues like rape culture (such as The Right To Sex by Amia Srinivasan, The Transgender Issue by Shon Faye, and Pedagogy of the Oppressed, by Paul Freire). This in itself is an important nod to the idea of social media activism as a jumping-off point rather than the endgame. Dr Xine Yao, an English Literature Lecturer at UCL, spoke to me about the vital, trailblazing research she’s been doing on trans studies. It was a real privilege to have and platform that conversation.

Nearly eighty universities have been named in the testimonies you’ve received. Have you seen any specific, positive change enacted on university campuses as a result – generally, and at UCL?

It’s hard for me to comment on what has changed during my time at UCL because we were in lockdown for the majority of my first year. I do know that UCL recently held an event discussing image-based abuse (sharing intimate images without consent) among young people, which our founder, Soma Sara, was invited to speak at. That is available to watch on the UCL website. Durham now has compulsory active bystander courses for freshers, which is the sort of stuff we should be seeing at universities nationwide. UCL has banned the use of NDAs (non-disclosure agreements), and more recently there has been a pledge introduced by the government to get universities to ban NDA abuse and it’s gaining momentum. 150 universities have been asked – six have signed the pledge so far. You can find out whether your own university has committed to the pledge on the ‘Can’t Buy My Silence’ website, which is the campaign spearheading this pledge.

What do you think are some of the most important changes that should be made – again, in general terms and specifically at UCL?

Services need to be very clearly signposted. It’s not enough to occasionally receive emails about these kinds of topics. I don’t think it’s unreasonable to say that if any student experienced sexual violence on campus, they should know what they can do. And not just what they can do, but what happens next. The ambiguity of what happens after you report is a huge deterrent for survivors and victims – the possibility that it will become ‘out of your hands’ is massively daunting. Retraumatisation as a result of going through the reporting process is also a very common occurrence. In order to have autonomy over their experiences and confidence in the reporting process, survivors need to know what the landscape of reporting looks like for them at their educational institution – not least society at large.

I think the most important thing is for universities to be in continual dialogue with their students. Single actions or gestures must be part of a larger arc of continual evolution and reevaluation of their practices. Banning NDAs, for example, is a good first step from UCL, but it only happened after a woman came out against the university because she refused to sign the NDA that UCL presented to her. It obviously shouldn’t have to come to that. It reminds me of the neat phrase Xine Yao introduced me to in her interview – you need to be proactive, not reactive.

On a more individual level, what advice would you give the students who want to call out others for problematic behaviour? That’s usually a difficult conversation to have, so may often be brushed aside.

Answering a question like this is tricky because there isn’t – and shouldn’t – be a prescribed format for calling out someone’s harmful behaviour. Even the phrase ‘calling someone out’ refers to a massive spectrum of possible circumstances. Any template for doing it potentially misses the point – you’re going to obscure the crucial particularities of someone’s situation with a one size fits all approach. One thing I can say for certain is that survivors come first. So, whether it is you or someone else who has been affected, their needs need to be met and they must have okay-ed any confrontation that is going to take place. When calling someone out, there are a lot of factors to take into consideration. What is the best outcome? What do I want to make clear? How can I do this in a way that, hopefully, ensures that they meet me on my level and engage with what I’m saying? In what environment/medium do I want to have this conversation? These are all questions you can figure out well in advance. How someone is going to respond is of course a central concern – planning ahead in this way can help temper that fear and help push the conversation towards whatever your desired outcome may be. Make peace with the awkwardness – it’s necessary and it’s productive. I’d also suggest reading around the issue if you’re feeling unsure about calling someone out. Informing yourself can give you the conviction to clearly diagnose the situation as a more confident, assertive, and active bystander.

More broadly, many UCL students may feel that they have little power to enact change. What advice would you offer, about how to respond to institutional failures, and how to make an active difference?

This is a big question, and I don’t want to overstate my position. What definitely helped me, though, is the incredible sense of solidarity and community that’s out there – through the people who work in the field, the initiatives, the societies, the survivors who tell their stories. That’s essentially the antidote to feeling powerless and alone. To people who don’t know where to start, I’d recommend finding people who do. Like any cultural problem, rape culture requires community and togetherness to be tackled effectively. I’d also say that no action is too small or insignificant. That’s how EI started – from one person, Soma, telling their story. Something as simple as reading the definition of sexual harassment could later give you the conviction to be an active bystander, because you can confidently recognise the behaviour in front of you.

And then, I suppose, these groups and initiatives have a dual function: providing community and support on a personal level, and more effectively making change on a collective, activist level. Could you name some of these London-based initiatives?

Yes, so Sistah Space, SHAG community (Sexual Health And Growth), Beyond Equality, the RAP Project, You’ve Been Spiked and Empower Her* Voice are all London-based. You can also find other initiatives through these pages – they are sort of webbed together, linked by shared aims and solidarity.

Community, in all its different forms, never fails to be valuable in work like this, in the face of an endemic that leaves people feeling isolated and powerless. I’m so inspired and emboldened by the people I work alongside and encounter in other initiatives. But universities can and must offer this kind of community and support to their staff and student body. It’s crazy to me that initiatives with zero funding are offering that which wealthy institutions are claiming is impossible to get right.

To find out more about Everyone’s Invited, check their website and social media pages.