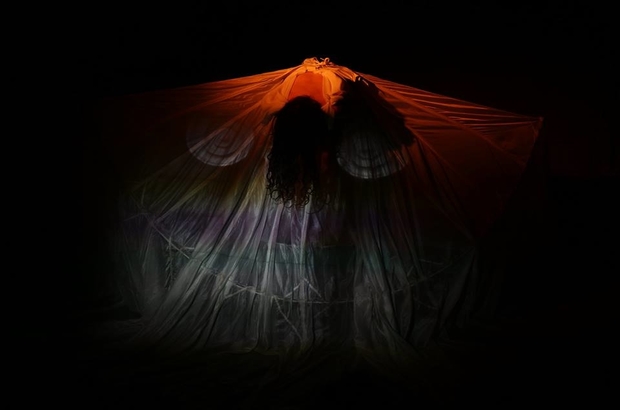 Phaedra, the story of a woman tormented by Aphrodite into desiring and pursuing her step-son, was reimagined in this bold new production written and directed by Avra Sidiropoulou. Reworking Euripides, Seneca and Racine, this one woman show remained loyal to the original story but relayed it in an experimental and artistic performance. Phaedra I— translated the tale onto the modern stage in a way that paid homage to the original while presenting it in a wholly new way, reworking it for a modern audience.

Avra Sidiropoulou brought this ancient tale into the realm of multimedia; Phaedra sat centre stage, her movement impeded by a billowing white dress, for the duration of the performance. The dress was constantly either illuminated by various coloured lights or projected onto with moving images. These projections were suggestive in their content but not so literal as to make either them or the narration redundant. This innovative staging was subtly reminiscent of the static nature of Greek tragedy – in Greek tragedy, famous for its rigid and strict dramatic conventions, action never happens onstage and is merely reported. Phaedra I— mirrored this convention through Elena Pellone’s Phaedra relating all the action of the play directly to the audience, narrating the events directly to us. In this way, it was also reminiscent of Greek narrative performances, in which Homer would be read aloud to an audience.

Two key features of Greek tragedy which are notoriously difficult to translate into modern theatre are the Chorus and the Messenger Speeches, both of which feel alien and often make the production seem overly self-conscious. Phaedra I— incorporated both these elements naturally, with Phaedra slipping in and out of character, between Phaedra and the Chorus. The prologue to the play was an interchange between Phaedra and the Chorus, in which the same lines were repeated over and over, with recordings of these lines played over the top, creating the illusion of a medley of voices. This matched very well with the experimental nature of the production, while again paying homage to the original play.

I personally was wary about the use of the film and multimedia in this theatre piece as these elements often redact rather than add to a production, as they take the audience out of the experience. There is a widespread desire to make Greek tragedy ‘relevant’ for modern audiences, and these same techniques are sometimes used carelessly, in attempt to bring these ancient stories into the modern world. However, I was pleasantly surprised by their use in this piece, as they melded very well with the whole production. They added a dynamism to the piece and served to create a backdrop to the words on an otherwise blank stage. The production didn’t fall back on the multimedia aspect to take the place of drama, instead using it to enhance experience, and as such created an original way of telling this story that has been told countless times before.

The play focused heavily on the idea of the experience of being a woman in society – the need to marry to find security and the inevitable boredom that comes from the life that follows marriage in such a strongly patriarchal society. This experience is bemoaned by many tragic heroines from Greek Tragedy as a whole but is also an experience of women throughout history.

The production visualised the idea of femininity in this sort of society onstage, through Phaedra being constrained by a white dress, reminiscent of a wedding dress, throughout the play. Sidiropoulou also chose to focus on the envy that Phaedra endured from other women, and thus further explored the idea of marriage as a trap for women as not only being a life of boredom, but also as an institution which benefits from women competing to achieve the best marriage, reinforcing the patriarchal narrative. The projections onto the dress nicely mirrored the prejudices that other women had about Phaedra, and their projections onto her life.

The play’s short length unfortunately meant that these ideas weren’t explored to their fullest extent, and that the climax happened all too quickly. Some of its power was lost as the audience were left reeling. However, this short, punchy drama certainly left an effect on the viewer, and it was a beautifully crafted production. Elena Pellone masterfully created and sustained various voices throughout the piece, and shifted seamlessly between them all, creating an ethereal and uncanny feeling for the audience and recreating the magic of Greek tragedy in a wholly modern way.