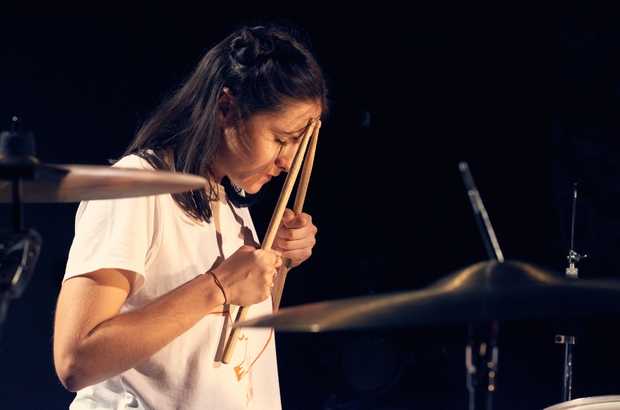 Lydia Rynne’s Hear Me Howl, directed by Kay Michael, was a one-woman whirlwind of comedy and emotion jam-packed into an hour. Thirty-year-old Jess, played by Alice Pitt-Carter, finds herself unintentionally pregnant and begins to question the life she has and what she wants from the future. The pregnancy news sparks a new zest for life within Jess and she spontaneously joins a post-punk band (‘like punk, but they give even less of a shit’). Her hilarious inner rebellious youth shows itself.

Pitt-Carter carried the piece with both vivacious energy and real vulnerability. At the beginning of the show when she finds out about her pregnancy, Jess wittily bats off her reaction to it. Looking for solace in audience laughs, there was a sense that she was performing to herself as well as the crowd, playing at being okay. Rynne’s incredibly relatable script perfectly captured Jess’s internal displacement. It felt comically real that Jess finds her new gig as a drummer through a day of scrolling aimlessly through Facebook and stalking friends she didn’t even know in real life.

The show played upon the tension between the outward judgements you and society make upon yourself, and your real emotions and experience. This is no teen pregnancy – Jess is thirty, has a long term and loving (if slightly oblivious) boyfriend, and a job. Everything is in place for a smooth life as a mother. We, as the audience, understand that and Rynne’s writing even initially bends us towards such opinions. Yet, Jess’s internal turmoil slowly unravels itself as her performance dives into the vulnerable. Moments like these really contrasted with Pitt-Carter’s frantic and hilarious prancing around the stage. Sitting cross-legged on the floor, back against the bass drum as a wide spotlight narrowed in on her, engineered an intimate moment of stillness for Jess’s unrestrained thoughts on her impending abortion appointment.

The full on-stage drum kit really added to the performance. It was amusing watching Pitt-Carter’s baffled experimentation with the drums in her first band rehearsal. Her subsequent escapism through the loud clashing she created was mesmerising and satisfying to watch. The audience shared Jess’s relief, as she found release from overthinking through something purely sensory. The drums and symbols were used to add pace to intense moments, such as through a quickening drum rhythm and lines delivered into an amplified microphone as an overly stressed Jess heads toward a panic attack. The kit itself worked as a beautiful metaphor for Jess’s progression as a character. Initially, the drums and symbols were scattered around the stage, but gradually they were delicately placed next to the bass drum, forming a full kit. Symbolising how her decisions lead her to feel more satisfied with her life and as a person, the drum kit completed itself.

While Pitt-Carter’s performance was enigmatic and she carried the one-woman show with ease, her characterisation was at times mildly irritating. Jess is the epitome of a big kid, an adult not wanting to accept their adult-ness. The direction played up to this well, but the performance occasionally slid towards the farcical and pantomimic. Her movement was overly frantic at times and the small performance space, unfortunately, accentuated this.

However, overall an engaging snapshot into one person’s very truthful and engaging struggle with their life choices, Hear Me Howl ended on a crescendo with a loud and joyous drum solo.

Featured image courtesy of Will Lepper.