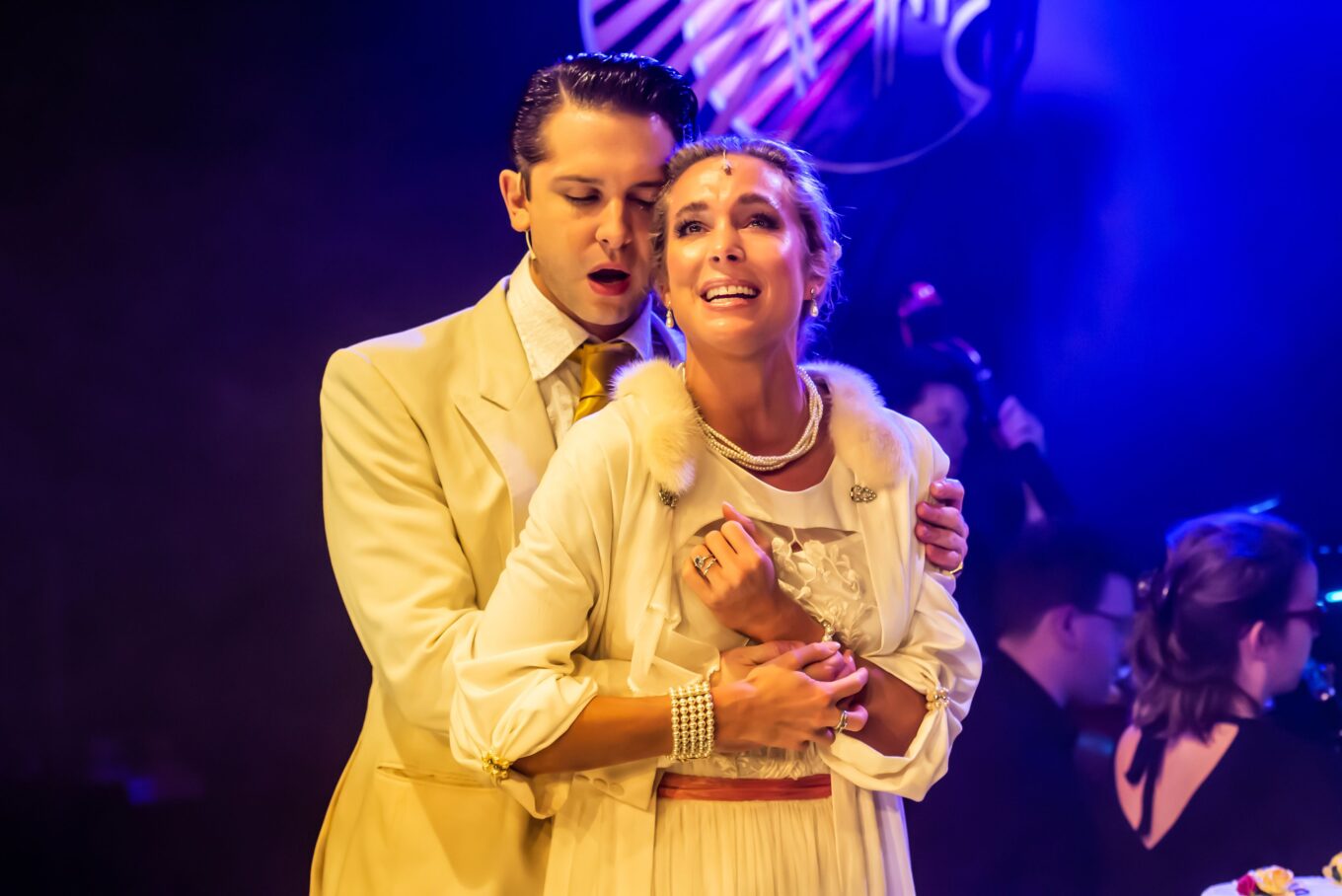 Scott Fitzgerald’s The Great Gatsby (1925) is an iconic work. Its status as a Classic, treasured by school syllabuses and leisurely readers alike, alongside its commercialisation with the 2013 film adaptation, makes it a daunting narrative to undertake. Despite this, Ruby in the Dust Theatre is not the first company – nor the first I have seen myself – that have set themselves the task of bringing this long-standing story to the stage. Gatsby: The Musical is fortunately an entertaining watch, inviting its audience into the dazzling world of the 1920s jazz era.

In this clever new adaptation by Linnie Reedman, the original narrative is framed with Daisy returning to New York seven years after the action of the novel, the story seamlessly segueing between past and present.  This seemed a beneficial tactic, saving the adaptation from the criticism from Gatsby-aficionados, who would protest that stage adaptations require cutting valuable parts of the narrative. In Reedman’s version, selectivity of the novel is natural and efficient.

What I found most successful in this production was its musical elements. Chris Whittaker’s choreography was charming and vivacious, lending an authenticity to the time period – which, unfortunately, was not the case with some of the costumes, audience proximity to the actors revealing such discrepancies. On top of this, the original songs were quintessentially jazzy; the up-tempo tunes are catchy, all optimised by their succinct length. Of course, none of this would have been as successful if not harnessed by an assembly of gorgeous voices – light and full of vibrato, a beautifully-blended ensemble sang alongside enchanting solos. A stand-out number was Myrtle’s ballad.

This leads on to discuss some of the less orthodox choices which the company made, some of which are successful and others more questionable. Myrtle’s (Julie Yammanee) boisterous and unruly quality is diminished in favour of a more tragic portrayal, a more feminist interpretation of the character. Lead Jodie Steele brings a particularly jittery nature to her Daisy, perhaps reminiscent of Ella Fitzgerald, whom some believe was the inspiration behind the character. While this is an interesting take – and indeed makes sense in the context of the new narrative in this adaptation – her erratic quality is at times distracting, or feels forced for such a small stage. The more overt allusion to Nick Carraway’s homosexuality, as portrayed by Luke Bayer, nonetheless seemed appropriate when reimagining the story for the sensibilities of a modern audience.

The company also convincingly demonstrated the persuasive chemistry between characters. Freddie Love was a marvellous Jordan and interacted dynamically with Steele and Bayer, and Ross William Wild in his role as Gatsby was convincing in portraying a man brimming with a tragically-fated love, although the character’s more profound and nuanced layers were arguably somewhat lost within this.

Traditional ‘glitz and glam’ in musical content was balanced with more experimental narrative and characterisations, creating a show with potential that was indisputably a worthwhile watch. With a larger stage and cast to allow the exuberant choreography the space to thrive, the audience would undoubtedly feel whisked away into one of Jay Gatsby’s legendary parties.

Gatsby: The Musical was shown at the Southwark Playhouse from 8 December 2021 to 8 January 2021.