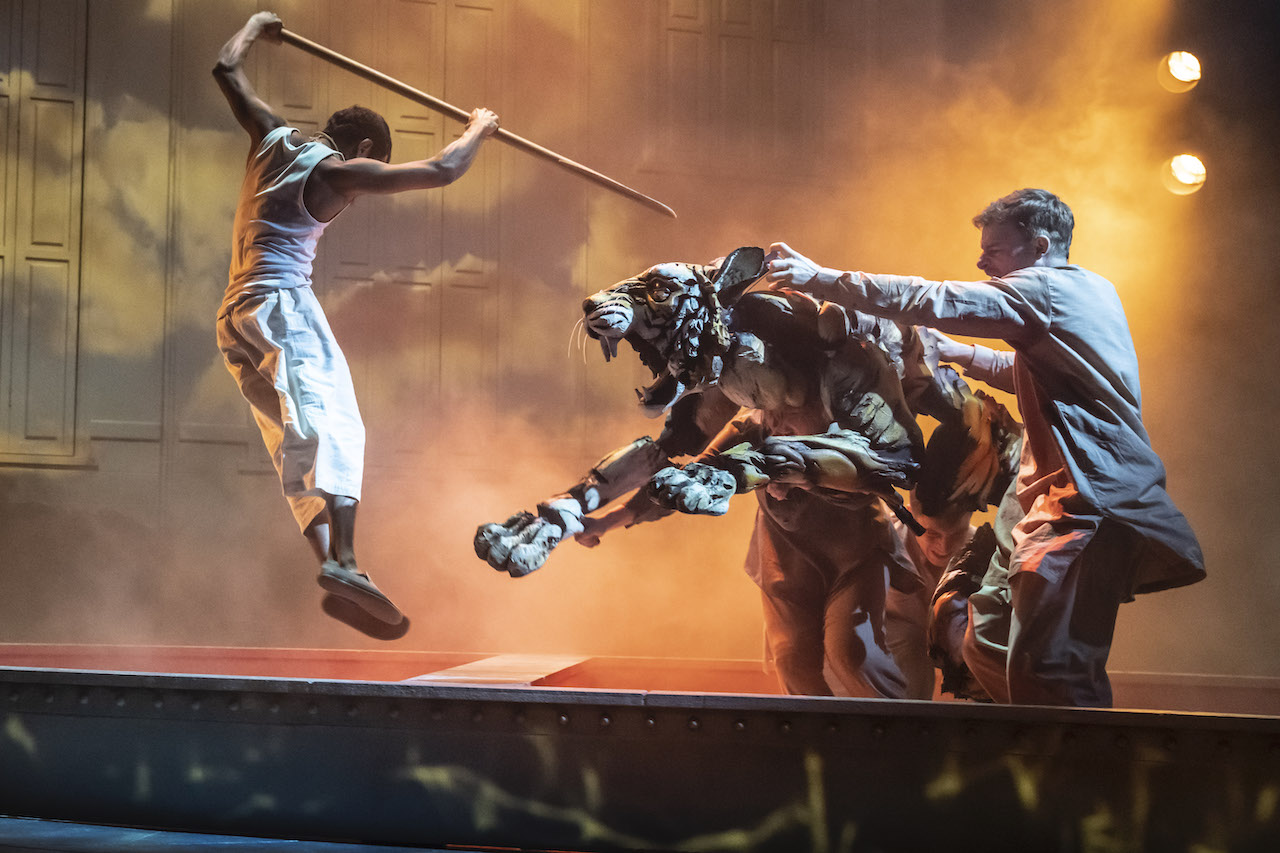 ERIN CROASDALE reviews Life of Pi at the Wyndham’s Theatre.

A bestselling novel, an Oscar award winning film, now adapted into a theatrical spectacle. After debuting at the Sheffield Crucible in June 2019, Life Of Pi recently made its West End opening at London’s Wyndham’s Theatre. The production pushes the boundaries of what is possible in a classic West End theatre; a boat-shaped stage with a revolve, puppet animals hauled up from the stalls doors, and lighting and smoke serving to immerse the audience. Storytelling is at the heart of the production, as teenager Pi Patel explains to investigators how he ended up the sole human survivor of a shipwreck, his only companion on his long journey across the Pacific in a lifeboat being an adult Bengal tiger.

Life Of Pi’s innovative staging brings its story to life. Its scenes shift from the present, where Pi tells his story to investigators in a hospital room, to flashbacks to his journey across the Pacific ocean. The dark stormy seas are a contrast to the empty and pale setting of the clinical hospital environment. The stage’s revolve moves the scenes forward, and creates a lively and electric atmosphere, whilst simultaneously demonstrating  the technical precision of the production. Every animal and prop has to enter the stage at the perfect timing to allow the show to continue smoothly, testament to the skill of the cast and director Max Webster.

This adaptation of Life Of Pi is more true to the original novel than the film, emphasising its philosophical elements. The themes of belief and religion run throughout, as one of Pi’s initial questions to the investigator is whether or not he believes in God. Although disagreeing with the investigator’s choice of atheism, he respects the firmness of this decision, explaining that agnostics are those he cannot understand: ‘choosing doubt as a philosophy of life is like choosing immobility as a mode of transport’. A contemplative teenager, Pi struggles to choose between different religions, describing them as ‘different versions of the same story’, a metaphor played upon throughout the show.

The moral compass of the play is balanced out by its wit, emphasised by the exuberance and child-like curiosity which Hiron Abeysekera brings to his portrayal of Pi. His delivery of dialogue, such as ‘I’ve had a terrible trip’, dryly describing his journey in comparison to the investigator’s simple plane ride, is charming and amusing. Moments of the production often lead the audience to fits of laughter; Pi’s challenging choice between his commitment to vegetarianism and survival provide both humour and wisdom in bounds.

However, the real star of the show has to be the tiger, Richard Parker. It is easy to be sceptical upon learning about the show’s reliance on puppetry, but Life of Pi easily reaches, or arguably even surpasses, War Horse levels of elaborate creativity. Immersed in the landscape of Pondicherry Zoo in the early section of the play, the animals feel real. Richard Parker is performed by three members of the cast, an extraordinary feat of teamwork and coordination. They bring the tiger to life and are particularly impressive in the fight scenes where it jumps up with a breathtaking roar. The transitioning relationship between Pi and Richard Parker, from foes to allies by the end of their journey across the Pacific, is touching to watch.

Night after night as the cast take their bows, audiences give standing ovations and exultant cheers fill the auditorium. They are mesmerised by the feeling of seeing something unlike anything else they have seen on the West End. From its gorgeously colourful Indian market scene to its gripping oceanic fight sequences between man and tiger, Life of Pi transports you to a place you have never been before. Through theatre, this play provides an escape from reality, something everyone needs from time to time, but now more than ever.

Life of Pi currently runs at Wyndham’s Theatre until 29th May 2022. Find out more here.