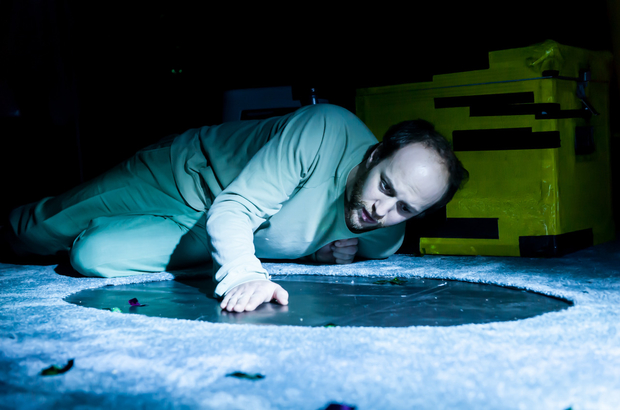 As part of the Vault Festival 2019, emerging playwright Serafina Cusack’s latest work Blue Departed explores the relationship between heroin addiction, lost love and fourteenth century Italian poetry. As the production illustrates, there are more crossovers between the three than may initially be imagined, but the piece also raises the question of where to draw the line between inspiration and adaptation in dramatic works.

The play pulls Dante Alighieri (Mark Conway), most famous for his Divine Comedy, six hundred years into the future to our present day and gives him a heroin addiction. The now near-legendary object of Dante’s love, Beatrice (Rebecca Layoo), joins him in the modern world. Following a series of traumatic events, Beatrice is dead on the floor and Dante has retreated into a perpetual high, speaking to the rotting corpse in his kitchen and hearing her speak back. This is where the play starts, and when Dante’s brother (Richard James Clark) arrives we begin the descent through nine circles and into a version of the pit of Hell depicted in Inferno, the first cantica of the Divine Comedy.

Rather than the great storms of putrefaction, flaming tombs and eternal icy entrapment of the original poem, Dante’s original circles of hell are rendered in the play as various moments in Dante and Beatrice’s relationship. Taking the malleability of the zones in Inferno to the extreme, the entirety of this Hell is personalised, created with the sole aim of torturing the protagonist with the love he has lost. We accompany him and the shade of his lover – cast in a Virgilian role – from the memory of their first meeting behind a Brixton needle exchange, through several unsuccessful attempts to get clean, her pregnancy and miscarriage and, finally, the re-enactment of her death in the ninth circle.

Love, rather than addiction, is the means of torture here. Perhaps this is an attempt to underscore the fact that addiction, while incredibly destructive, does not eclipse all the other concerns and facets of its victims. The journey does, despite this, reflect Dante’s movement from heroin-induced unreality, through the come down and to painfully restored sobriety, allowing the audience to reflect on the far from comforting – but all too true – fact that quite often it is the real world that tortures us the most. While drugs, sleep, or even art can offer a temporary escape, we must always sober up, wake up or leave the theatre in the end – the only alternative is death.

That being said, the play was not a sixty minute, existential-crisis-inducing mood-killer. There were moments of incredible black humour throughout. That the funeral scene was among the funniest was fitting, given that every joke came with the same guilt one might feel if laughing at a real funeral. The overall subject of the play was far from amusing, but it did much to demonstrate the fact that humour can always be found in tragedy.

The cast of three were incredibly able and carried off the production with ease. There were a couple of minor line slips, but these were recovered from gracefully and could, to some extent, be said to add to the credibility of the characters, given their chaotic states. Once an initial technical hitch which delayed the play’s start by around twenty minutes had been resolved, the production was smooth and effective. The subterranean feel of the venue (the Cage auditorium at The Vaults) added to the atmosphere of disorder and decay established by the lighting and soundscape. The props used were minimal but functional. Ideas of heroin and overdose were everpresent, hauntingly conjured by the amount of blue visible on stage at any given time; heroin overdoses cause blue or black discolouration in the extremities, and we are told that Beatrice is blue by the time Dante’s brother sees her corpse.

The show was superb: a fascinating concept executed well. However, it is difficult not to question whether the direct Inferno context was necessary. The premise of combining modern love in the face of heroin addiction with arguably the best-known depiction of Hell outside of the Bible is captivating, and one that I very much enjoyed exploring. But I speak as an English Literature undergraduate familiar with Dante’s Inferno – had I not understood the original material, I can’t help thinking that elements of the crossover could have distracted from the core action of the play.

This raises the issue of where the line between inspiration and adaptation lies in theatre. While the idea of the play may have grown out of Dante’s poem in Cusack’s mind, the plot – once formed – probably could have stood perfectly well without it. Mark Twain argued that there ‘is no such thing as a new idea,’ and if we agree with that sentiment then all new work must be an adaptation or conglomeration of sorts. How necessary is it to explicitly nod to the texts which have inspired a piece, when an implicit similarity is all that is really needed?