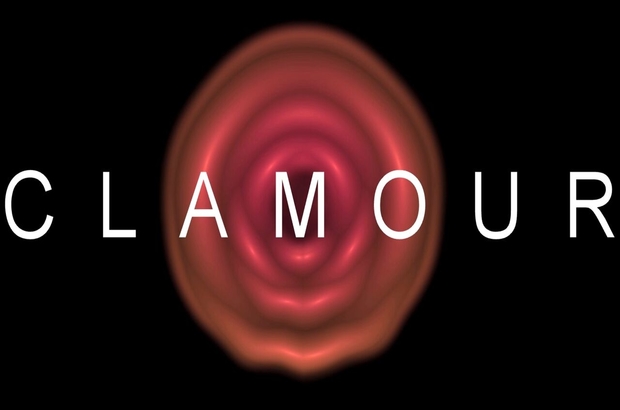 Digital artists Simon Katan and Luke Fraser’s 2018 incarnation of their evolving show Clamour pitched itself as ‘an interactive, mixed media theatre piece’ which ‘wryly and reflexively interrogates how social media mediates and influences our knowledge, relationships and identities.’ This is a bold description, given the many intricacies these social issues entail in our modern world. Considering the production was only 45 minutes long, it perhaps tried to cover too much ground in its attempt to do each issue justice, but that in itself could reflect the shallow and transitory nature of life in the technological age.

The production worked through a combination of a web app on audience smartphones, a projector and a vast soundscape. The only person on stage – a man in a black t-shirt typing on a MacBook throughout – dictated the content appearing on the audience’s phones in real time, which is one way in which control, a key theme of the piece, presented itself. The audience could literally see the person who was manipulating them, yet they continued to play along.

The backstory encompassed something of a whistle-stop tour of hot political issues: abuse of the earth’s natural resources, international unity and dissent (hitting perhaps a little too close to home with the implicit nod to Brexit) and public voting fraud. Furthering the idea of political divisiveness, if you took a moment to glance up from the text flowing on your own screen – something which was disconcertingly hard to do – not all audience members received the same version of the story. An “us vs them” mentality was encouraged, but only one group was explicitly told about it. If you remained engrossed in your own device the whole time and were assigned to the other group, you would never even know this element of the production existed.

Once the voting element of the production began – perhaps a little reminiscent of Kahoot quizzes initially – the audience was quickly forced to decide whether a vote which makes no difference to the outcome of the poll is even worth casting, as the manipulation of results became more and more explicit. Although by no means exhaustive on the issues it raised, the production stimulated audience members to think, discuss, and interrogate its political ideas further after leaving the theatre.

As a highly technical piece of theatre, based in the Sackler Space of the Roundhouse for one night only, the slight technical hitch with the WiFi which delayed the start was probably to be expected. However, once all was up and running, the piece was seamless. The experience was incredibly immersive – the lighting, visuals and soundscape were in perfect harmony. Altered lines of song lyrics appeared onscreen exactly as the original was played aloud, while instrumental soundtracks, coloured (most notably red) lighting and striking images all combined at the moments of highest suspense. Robotic computer-generated voices were also used to great effect during the voting.

Despite the claim that ‘it is the audience themselves, through gameplay with image, sound, and text, who will determine the shape of the final performance,’ these elements also further enforced the ideas of control at the heart of the piece, as even the emotions of the audience were manipulated. In a sentence, Clamour was an innovative way to embrace phones in the theatre, rather than demanding that they be hidden away, while also confronting the less savoury implications that technology undeniably carries.

Clamour played at the Sackler Space in the Roundhouse on 22nd November. Find more information here.