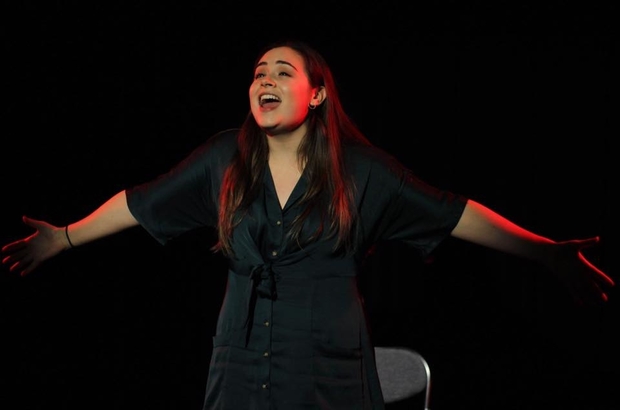 Edges, a piece of musical theatre written in 2005, is the earliest work from creators Benj Pasek and Justin Paul, who would go on to write music for Dear Evan Hansen and The Greatest Showman, and ‘City of Stars’ for La La Land, for which they won a Best Original Song Academy Award, amongst other accolades. The show explores the trials of growing up at university, and rings true since Pasek and Paul were 19-year-old undergrads at the University of Michigan when they wrote it. The subject matter, along with the minimalist staging, and the cast of just four and two musicians (Louis Shaw on drums and Yutong Zhang on keys, and also the show’s Musical Director), meant the production could very easily have felt like a sixth-form recital. However, the charisma of these cast members (Dan Barber, Mathew Kollamkulam, Lizzie Miesenboeck, and Jennifer Osei-Mensah) instead concentrated the audience’s attention on the characters themselves, who were the driving force of the show.

That being said, the pared-back performance did complicate the use of multirole a little. The piece is a song cycle rather than a fully-fledged musical, meaning that many – if not all – of the songs are performed by different characters, but the same cast members. This is arguably part of the show’s appeal, but not much was made of it in this performance. There are, of course, exceptions, for example the two men in ‘A Pretty Sweet Day’ were easily distinguishable from the other roles they played. Furthermore, the loose nature of the song cycle, which is more a collection of individual musical numbers set around a theme than a wholly cohesive, plot-driven show, meant that the performance still worked despite the occasional lack of differentiation. The characters, then, could have been more distinct, but despite this they were believable, relatable and engaging.

Amidst a more complicated or jazzy production, they may have easily got lost, but director Joey Jepps’ choices of a simple set, calculated movement and use of levels, combined with the lighting, created a well-focused performance. Disco lighting was particularly effective in emphasising humour during ‘Man of My Dreams’, while the manipulation of red lighting and shadow increased the hilarious ‘psycho-ex-girlfriend’ atmosphere during ‘In Short’. The decision against really showy production elements also allowed the cast to properly showcase their acting and vocal skills.

The style of the show was very all-American, in a similar vein to musicals like Hairspray. The cast’s seemingly effortless accents matched up to this, and were well-maintained and clear throughout. On the opening night performance, an off note here and there can be excused and the cast’s voices overall were strong. The show demanded a fair amount of falsetto from each cast member, and although the lack of microphones perhaps led to a slight loss of power on the very highest notes, the compact auditorium and slick moments of harmony ensured that this was not of any real concern. The acting was impressive throughout, and many of the funnier scenes had the audience in fits of laughter.

For a show that is by and large upbeat, cheerful and funny, it broaches some fairly sober subjects. Largely during the more intimate solos, the production approached young people attempting to tackle the frightening realities of careers, relationships (platonic as well as romantic), success and self-acceptance — the adult world, in other words. Some of these topics were explored through a comic lens, as seen in ‘Better’, while others like ‘Boy With Dreams’ were more bittersweet. There is also a nod to society’s relationship with social media in the laugh-out-loud number ‘Be My Friend’, which caricatures the widespread noughties obsession with Facebook.

Given the song cycle form is inherently tied less to linear narrative than traditional musicals, it may seem contradictory to say that it still felt like some plot development was missing. Of course, the theme of growing up and coming of age weaves its way into every song and is amplified by the refrains taken from the opening number ‘Become’, so it is not that a story was completely absent. The characters as they were presented could undoubtedly have supported something more action-driven, although perhaps to say so is to miss the very point of the show’s structure. As a less plot-based show, it could be said to encapsulate the idea that reflections in later life upon youth, with all its struggles and joys, often become fragmentary snapshots in memory.

Overall the show was well-performed and high energy, while also not being afraid to touch on some more serious themes, but perhaps did not achieve its full potential. That said, it may have simply played into the flexibility of the song cycle form, allowing audience members to each take an individual experience away with them.