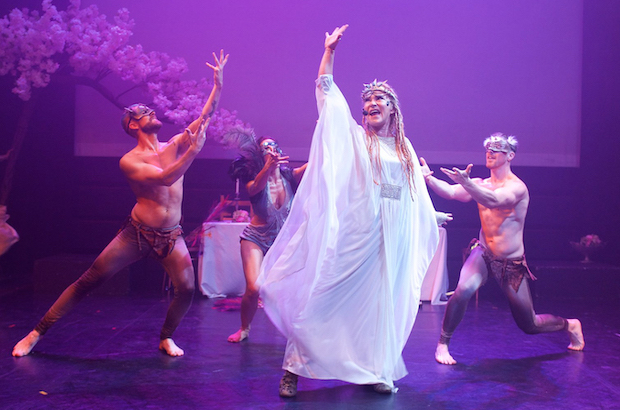 This article contains references to racism, homophobia and ableism.

Selling itself as a filthy, queer celebration-box of assorted cabaret acts and pulsing basslines, Zeus on the Loose sounds like a promising romp through the lands of Ancient Greece and the palace of the gods. The reality, however, in a grotty room under the pulsing lights of Fire, a nightclub in Vauxhall, doesn’t quite live up to the hype. There are some undeniably funny moments, and some impressive contortions of both bodies in hoops and of vocal chords, but as whole, the show falls flat. Unfortunately, some aspects stray towards being downright offensive. The performers’ clearly high level of skill, doesn’t quite rescue it from leaving a rather bitter taste by the end.

The show and performers’ discipline is perhaps the root of some of the clunkier elements of the show. The hour-long delay to the start of the performance leaves the audience under stage lighting and racing techno for longer than necessary, and sets the tone for the rest of the piece. It’s a new venue, it’s opening night, one can’t be too harsh on a production for this, but the missed cues and occasionally wooden acting with jokes that rarely land don’t quite make up for this mishap. Vickie Vox, the guest star drag queen playing Hades, delivers some of the show’s more successful zingers, but this is undermined by her delivery of an extraordinarily insensitive warning for audience members with epilepsy, and an  inappropriate quip about #metoo. If cues were not missed for some of the impressive vocal numbers and dance performances, perhaps the experience may have been more enjoyable. If the storyline were more consistent and less about gimmicks and who can make the ‘filthiest’ joke it may have been funnier and edgier. In its current state, however, it is more uncomfortable than riotous and liberating.

This leads me on to the more unpleasant undercurrent that runs throughout: the barrage of stereotypes and chorus of tokenism that underpins the sketchy script. Within the first 5 minutes,there is a joke about lesbians not having real sex and the appalling epilepsy disclaimer previously mentioned. Zeus is the token person of colour in the cast, reconfigured into the antiquated trope of the greedy bisexual, who is ravenous for sex as a consequence of their queerness. As a rule, use of queerness in the play is a stereotype framed as a cheeky wink. Hera, as well as being the age-old trope of the uptight wife, is white and wears dreadlocks, a white woman playing Isis does an ‘Egyptian’ dance that teeters far too close to brownface. The stings kept coming, and the audience feels tense every time another one is dropped in.

The attempt to seek redemption through a fiery speech from Hera only serves to underline the muddy, misogynistic current that undercuts the whole piece. The speech that is so on the nose it loses all sincerity, and bursting into I am what I am afterwards ridicules her sentiment to the point it is uncomfortable. Hera remains the hysterical, uptight wife that has haunted theatre since the ancient times where this play supposedly finds its origins. This combined with #metoo jokes at the most inappropriate times makes for an incredibly backwards interpretation that the cast seem to have tricked themselves into thinking is radical. The aforementioned character of Isis barely speaks before jumping into *that* striptease and becoming the hungry Zeus’s next conquest.

What carries the piece more than anything is the performers’ skill, perhaps not in precise delivery of lines, but the dance and song elements are genuinely amusing and well performed. They go from ballet to musical theatre to aerial work: no mean feat. The costume is eye catching, and the world of the gods is quite believable as every 4th wall is broken and some ‘lucky’ attendees are welcomed into a ‘feast with the gods’ on stage with Hera and Zeus. The choreography feels fresh and is engaging, but I’m not convinced this is enough to make up for the myriad of mishaps that litter the play from the get-go.

The sea of suits fresh out of work, sporting HSBC branded backpacks seem like the appropriate audience for a cabaret that feels like it was written 10 years ago. Though the singing is strong and the cabaret acts are impressive, the more problematic and messy elements of the piece undermine this totally. If you want a filthy, fun and radical queer cabaret, you’d be better off heading to the RVT or The Glory on a Friday night.

Zeus on the Loose runs from September 25th to November 2nd at Fire, Vauxhall, details here.