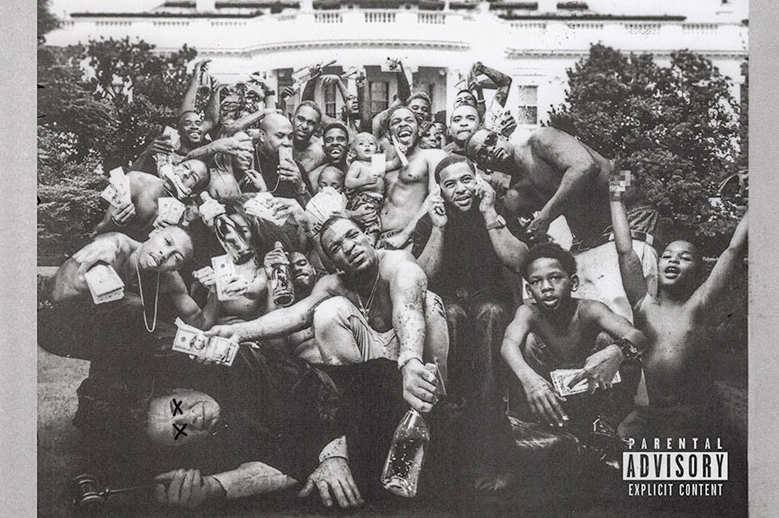 Around halfway through To Pimp a Butterfly, the third album to drop from Compton’s current poet laureate, Kendrick Lamar raps “Nigga, we gon’ be alright” in a cadence that invites comparisons to that of Chief Keef’s “That’s that shit I don’t like”. It is an intriguing connection, however unintentional, between two rappers, born in different cities and into the same inequality, championing utterly oppositional responses to their collective plight, with one willing communities together, and the other partitioning it through the threat of glock-fire.

Kendrick has been courting controversy with regards to black-on-black conflict recently, particularly in the wake of Ferguson, of Eric Garner and Michael Brown, in tandem with the build up to this album, drawing heat in particular from the closing lines of ‘The Blacker the Berry’ – “So why did I weep when Trayvon Martin was in the street?/ When gang banging make me kill a nigga blacker than me?/ Hypocrite!”. It is a rare moment when Kendrick’s frustration with block vs block gang wars, separatist crew colours, and its promoters, such as Keef, spills over from a voice of moderation to one of absolute bitterness. Kendrick, if not hateful, is angry; frustrated that so many of those in his community, elsewhere and in music, who have condemned these police acts, continue to do the killing for them.

This is not to say that Kendrick despairs throughout this album. Rather, it is an album that is born from the expression and encouragement of positivity and love, with his deviations into sadness, self-hate and resentment only serving to highlight his humanity. Take ‘u’, the spiritual flipside to the self-love of ‘i’, where Kendrick opens by screaming “Loving you is complicated”. He goes on, laying out the guilt he feels on leaving Compton, on leaving his sister, on only facetiming his friend before his death; In short, feeling he is not where he should be. It is a savage attack on the self that feels earnest and of the moment. Yet in its latter half, while swigging bottles and rapping tearful, there is a tonal shift through a horn that is a mark of tenderness from the track’s creator to his character, its melody sympathetically drunken, choosing to coo crying Kendrick rather than berate him.

It is this interplay, this carefully toed line between happy and sad throughout which makes up much of this album’s pleasures. ‘These Walls’, about both the physical walls of a vagina and the socially formed walls around communities, is brim-full of tongue in cheek double entendre, yet often toys with falling into seriousness. Yet even as the song teeters on this point in a minor chord hum, with Kendrick rapping “These walls are vulnerable” or “These walls could cry tears”, a cute as buttons upwards sliding guitar lifts us out. The chord progression in ‘Complexion’ which is lifted straight from the Jackson 5’s I want you back never fully flowers, instead restraining itself, melting into mellow jazz harmony.

The trade-off of this is that TPAB hasn’t a patch on the catchiness of Good Kid Maad City. While ‘Blacker the Berry’, ‘i’, ‘Alright’, and ‘King Kunta’ are all more than passable self-contained singles, TPAB is far more concerned with the theatrics of its entirety than the hooks of its tracks. As an example, Kendrick’s most quotable line –“This. Dick. Ain’t. Freeeee”- is spoken in an eccentric, even sassy inflection, but certainly not a ‘cool’ one, and arrives in a song (‘For Free’) that is only a dance track for people who dance to bebop. It is an album born from Jazz, from P-funk and soul, rather than the fashionable contemporary rap of GKMC. The crew can’t and won’t get turnt to this, but your shoulders will sway and your feet will bop. You might even click your fingers to it.

In place of hooks, TPAB lures us back through the pleasures of its minutiae. The metal sounds in ‘Mamma’, reminiscent of empty cans of dog food struck by a hobo with sticks. The nylon string guitar arpeggios which spur ‘Complexion’ along, or the descending keyboard line of ‘institutionalised’ which stutters and slows the beat, Kendrick’s flow railing against it like a tide and so painting the song’s point in sonic interplay. Thundercat’s wah wah’d note-blobs on ‘Wesley’s Theory’, arguably the most moreish bass sound in a hip hop song since those in Madvillain’s ‘Accordian’. Also, that spring in ‘King Kunta’.

But the most rewarding listen of all is Lamar himself, whose flow, voice and subject matter have never been so varied. From the childlike, petulant and lyrically simple –“Lil hoe you went to school with, boo boo/ Baby mama and your new bitch, boo boo”- to the complex and lyrically beautiful – “The ghost of Mandela, hope my flows they propel it/ Let my word be your earth and moon you consume every message” – and back down to earth with hilarious quotables –“A little nappy headed nigga with the world behind him/ Life ain’t shit but a fat vagina”. It is a breadth few rappers could lay claim to, one that few would even dare attempt.

The album is not without its flaws. The poem that runs through the album, growing as we go along the tracklist, is novel at first but comes to feel half baked. It is an attempt to tie the album together as GKMC’s voice interludes did, whereas the music of TPAB, in subject and sound, binds the album together of its own accord, thus rendering such interludes irrelevant. His discussion with snippets of a 1994 interview with Tupac, though as well done as it ever could be (and quite touching when one considers how much Shakur has inspired Kendrick), the inherent falseness of it prevails over repeat listens. While I’m being pernickety, the unveiling of God in ‘How much a Dollar Cost’ as the homeless man overblows what is, until this climax, a subtle and well-told tale. If the idea for the end of your song is the end scene of Bruce Almighty, maybe get a better idea.

Yet even these failings can come to express the album’s message. As flawed as Kendrick may be as a person, so are we all, with only our striving to be better to distinguish us. If TPAB has a few, largely negligible missteps, it is only because it tries to be so much better than what is expected these days from a hip-hop album; better even than an album from the genre’s current posterboy. And its successes in this striving far, far outweigh its flaws.

To Pimp A Butterfly is out now on Interscope