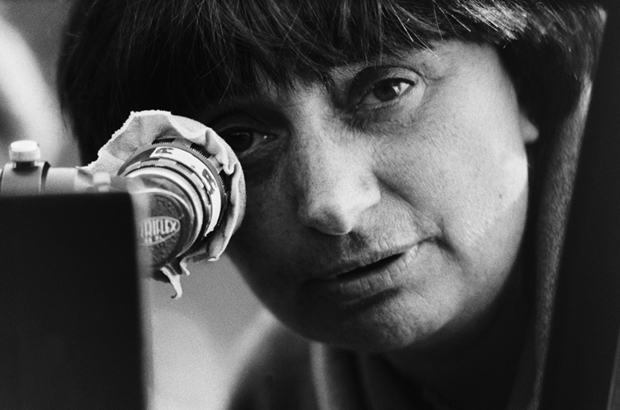 Brussels, May 1928. A year to the month before the first award ceremony ever held by the Academy of Motion Picture Arts and Sciences, Agnès Varda was born. Almost 91 years later, she stands as one of the most beloved and prolific filmmakers in history, with more than fifty directorial credits to her name.

Varda is perhaps best known for her association with the French New Wave, having been given the nickname of the movement’s ‘godmother’ or ‘grandmother’ – a somewhat dubious title considering that she was only a few years older than her fellow Nouvelle Vague filmmakers. Regardless, this soubriquet was most likely a result of the impact of her first film, La Pointe Courte (1955), widely regarded as a precursor to the movement. Filmed in the village of Sète, where Varda spent her childhood, the film blurs reality and fiction in a way that would become iconic of the New Wave. It cemented Varda as a highly influential force of one of the most important shifts in cinematic history.

Varda lacked training and knowledge of the craft prior to creating her first film. She had trained and worked as a photographer – something to which many attribute the near-perfect visual composition of her films – but knew nothing of filmmaking. She once estimated having only watched around ten films by the age of twenty-five. This stood in stark contrast to other New Wave directors such as Truffaut, who spent his childhood exploring the various Parisian ciné-clubs. Perhaps it was this idiosyncrasy which entrenched Varda’s presence in a movement rooted in the art of breaking the norm. After all, how could rules be followed if they were never acknowledged in the first place?

After La Pointe Courte, Varda continued to imbue her films with the youthful, defiant spirit of the New Wave. No matter the subject, her stories unfolded themselves in ways that were proudly unique, and still stand as starkly distinct from conventional storytelling. This rebellious spirit persists even in Varda’s most recent creations, after transitioning from fiction to documentary. The sequence that immediately springs to mind is one from Les Glaneurs et La Glaneuse (2000), in which accidentally captured footage of the lens cap swings wildly to and fro as the camera points to the ground. Entitled ‘The Dance of the Lens Cap’ and set to an erratic jazz piece, the sequence is useless from a purely narrative standpoint. Yet it speaks for Varda’s outstanding ability to explore her themes. In a film about waste and the things that are so often left behind, she includes a piece of footage which would normally be left on the cutting room floor.

In 1958 Varda met Jacques Demy, another influential filmmaker of the French New Wave. The two fell in love and moved in together in 1959. They remained married until Demy’s death in 1990. Together they formed one of the most subtly influential couples in cinema, both destined to reshape the language of film in their respective ways. During the period of Demy’s illness, Varda began work on the film Jacquot de Nantes (1991), a tribute to her husband’s life and talent. She cast actors to recreate some of Demy’s early childhood memories as described by him. The result is a beautiful, heart-wrenching attempt to clamber inside the mind of the one she loved and was about to lose. In depicting her husband’s thoughts and memories in excruciating photographic detail, Varda preserves what will inevitably cease to exist. This willingness to share something so intimate and personal with the public (perhaps in a last effort to prevent Demy’s mind from fading from existence) was an astounding act of love and devotion. Demy never got to see the film. He died a week before production finished.

Following Demy’s death, Varda suffered long creative dry spells. Aside from Jacquot de Nantes, she devised only three films in the nineties – a decent output for most other filmmakers, but low for her average of nine films per decade. Inspiration struck again at the turn of the millennium, when she was sat outside a café near her home in Montparnasse and witnessed some people picking up leftover scraps at a market. The result was her documentary Les Glaneurs et La Glaneuse (2000), a strangely emotional and self-reflective film about waste. Varda described this new documentary style as ‘cinécriture’, a portmanteau of the French words for writing and filmmaking. Her works became formulated less as factual, chronological explorations of a singular subject matter, but rather bearers of a free-flowing and essayistic quality. She would take a seemingly one-dimensional, inane subject, and develop the thematic narrative in such a way that the audience would find themselves confronting intricate questions on the human condition. Such was her talent that, while watching, one hardly notices the transition from simplicity to complexity.

A bastion of independent cinema, Varda never relied on Hollywood to succeed. The only time she considered making a film via the American system, a producer pinched her cheek – to which she retaliated by slapping him. Decades later, she showed no regret, stating in an interview with the Guardian in 2018: ‘it was disgusting to do this to me […] he deserved it.’ She remained overlooked by the Academy throughout her career. Only in 2017 was she honoured with a lifetime achievement award before her first actual nomination for the brilliant documentary, Visages Villages (2017). She chose to attend a previous engagement instead of the nominees luncheon, to which she sent a cardboard cut-out of herself along with her co-director. Varda serves as proof that notability needs not always correlate with the mainstream. New Wave auteurs were just the first chapter of a life of attracting the talented and influential. She was close friends with Jim Morrison, reportedly one of the six people to witness his burial in 1971. She posed Fidel Castro for a photographic portrait in 1962, and helped to discover a young Harrison Ford in the late sixties.

I have avoided mentioning Varda’s recent death thus far, partly because I had never intended this to be a memorial tribute, but equally because I wasn’t sure if I could find the words to describe the deep impact that her departure has had on me. I realised just how much inspiration I had drawn from her life and films. Varda never shied away from exploring themes of time, age, and death. Her body of work is in many ways defined by those themes. Somehow, this was without ever being morbid; until the end, Varda’s work was joyful and curious, the self-reflection always marked with wit. She once said ‘I am still alive. I am still curious. I should not be treated like an old piece of rotting flesh!’ I think that is how I would like to remember her, with a camera in hand.