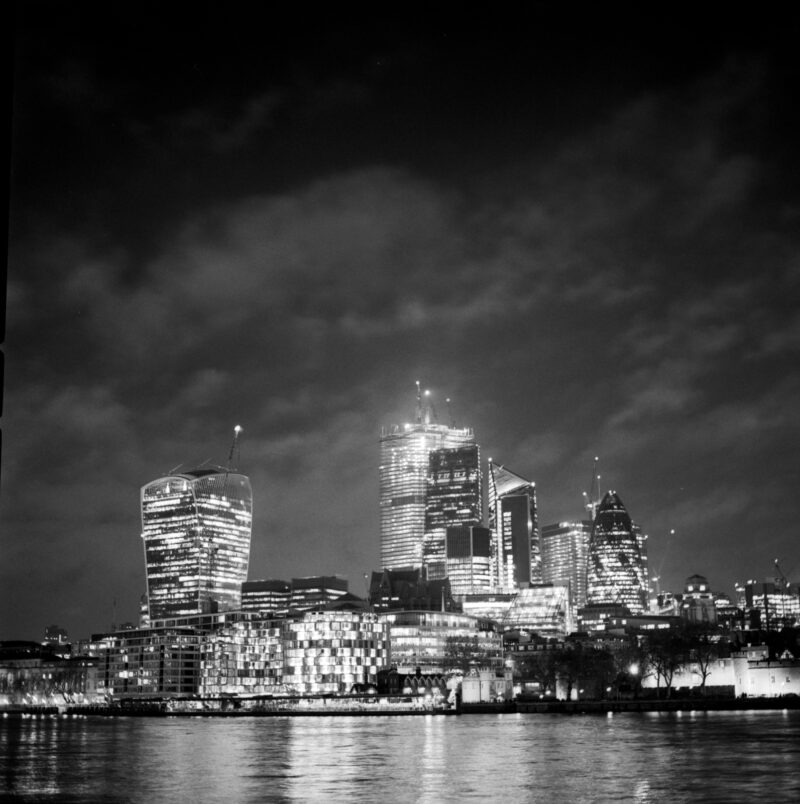 MARISA BECIROVIC takes us with her on a walk through London, considering London’s great art institutions in a newfound light, at a time when all we can do is gaze at their exteriors.

‘Forgot my umbrella!’ I say out loud to the empty street, one foot over the threshold, and hurry back inside. Now armed with this device, an essential prop for an early Spring stroll through London, I set off into the morning silence. Regardless of lockdowns and quarantines, Sunday mornings will never change. This is a sacred time for being enveloped in duvets, for cups of tea, for the calm of indoors. Our homes, those buildings we so often take for granted, have always been our spaces of refuge; the echoing of these silent London pavements reminds me of this now more than ever. Homes have become our schools, gyms and studios. Those creating work have shown mere pixels to the outside world – new things remain unobserved by outsiders’ eyes. Homes have gone unvisited for a year, something which is no less true for the homes of art: the galleries, museums, theatres and creative spaces, now transformed into dimmed interiors collecting dust.

I pass empty Camden High Street and deserted Euston Station – eerie. Lockdown aside, this atmosphere could be explained by the day of the week: it was a Sunday after all. Turning onto Tottenham Court Road, I walk through the ravine of tall office buildings. Glass and commercial concrete. A bus rushes past me: there are no passengers to stop for. Even the Primark on the corner of Oxford Street is barren – a sight I have seldom seen. The atmosphere is not melancholic, however; more so, I am intrigued at how our environment is now taking centre stage. Thoughts of running late for meetings, the extortionate price of coffee in London, or annoyance at yet more road works no longer occupy this space. The inanimate structures making up the city are overwhelmingly apparent to the solitary viewer. Centre Point claims back its spot on this now unpopulated road. Its honeycomb, grid-like windows take their turn to peer over London, and invite Londoners to peer back.

Following the path down to Trafalgar Square, I set my eyes upon The National Gallery. To me, the lions encircling Nelson’s column are aptly placed to guard this palace-like structure; one that houses artistic royalty behind its columns. Inside, marble floors span the vast rooms, the walls of which are painted in rich colours, and of course are adorned by treasured Constables, Caravaggios, Van Goghs and Degas’, amongst 2,600 others. The building, built in a Neoclassical style by William Wilkins (who also designed UCL’s main building), opened in 1838 as ‘a gallery for all’. White corinthian columns pay unabashed homage to the ancient civilizations, seen to act as pioneers in many creative disciplines. But, indeed, beyond this brilliant white facade, a simple brick building resides. My stifled cynicism forces me to consider the symbolic implications of this juxtaposition: is the ugly truth of inequality in art history just as easily covered up as these bricks? Notwithstanding, The National was a pioneering force in making art accessible, and still upholds its commitment to free admission today. Its stance is that art should not merely be a luxury enjoyed by a privileged upper class. A place housing such extensive art history has opened its doors to students and enthusiasts alike to admire the greats. Room 34 is one my mind wanders to… Turner’s scenes delicately hang there. While London basks in the morning light, the sun sets on The Fighting Temeraire (1838) and storms rage in Calais Pier (1802). The National Gallery is a place of time travel and escape.

Leaving Nelson’s column behind me, I climb the stairs past Embankment Station and cross Golden Jubilee Bridge. The Thames swims below and the skyline dazzles my eyes. I scan the horizon. The buildings in The City, appearing as tall clusters of crystals, look almost transparent as a cast of mist (or smog) coats the sky. The Shard towers over the lot. To the left St Pauls’ dome sits in a jumble of buildings, and just behind it, I see the three distinct towers of the Barbican. ‘They look so tiny’ I think and laugh a little as I recall the immense towers as they appear when one stands right in front of them. I suppose it’s rather appropriate it appears this way from a distance: it embodies the saying that ‘looks can be deceiving’.

Developed by architectural firm Chamberlin, Powell & Bon, the Barbican Centre was opened in 1982 and still stands today as one of London’s best examples of Brutalist architecture. The whole complex took ten years to build. It was an ambitious project to revive the area that had been razed to the ground following the Blitz in the Second World War. This ambition is encapsulated within the concrete structure; the centre boasts concert halls, theatres, art galleries, cinemas, beautiful transitional foyer spaces and even a conservatory. A brilliant dichotomy exists within the Barbican: outside, slabs of concrete enclose a harsh maze of walls and outdoor stairways; while indoors, a muted nostalgic atmosphere oozes from dimmed lights, carpeted floors and curved, textured walls. The centre was seen as a ‘utopian vision’ when it was first built, indeed, a vision it continues to uphold. Utopian ideals are described by Krishnan Kumar as ‘reality transcending’, and the Barbican certainly creates an environment of transcendence through the arts. Despite its seemingly rigid exterior, it houses some of the most fluid ideas in London, an epicentre for cultural and artistic change.

Another left turn and I make my way down the Southbank. It starts to rain as I pass the graffitied skate park beneath the yellow Southbank Centre stairways. Puddles collect outside the National Theatre – I take out my umbrella (I told you I’d need it!). It’s a short walk, down past Blackfriars, where you will find the 21st century Herzog & de Meuron creation: the Tate Modern. Where to begin? To be honest, I was slightly scared of this building for a while. The huge industrial chimney rising 99 metres into the air induces a sense of vertigo. The beauty of the gallery’s concept and design, however, remedies this feeling.

Opened in 2000, the Tate Modern is an astounding piece of contemporary architecture that so cleverly reinvents a space while retaining its history. The former Bankside Power Station is the shell for this museum that now holds some of the world’s most valuable pieces of modern art. There is an eclectic range of exhibitions from established pioneers of Modernism such as Picasso, to contemporary visual activists such as Zanele Muholi. The building is filled with contrasts: industrial steel and old brick are found next to halls of polished concrete; high ceilings and white angular gallery spaces welcome air and crisp light while lower levels embrace shadows and echo the original industrial features. It is a place of reinvention, and so feels like the perfect home for modern art. It is a building that one can be simply engulfed in.

My trip draws to a close as I take the Millenium Bridge back north over the river. ‘What a city!’ I think. I feel dizzy from the variety of sites my eyes have feasted on; like having too much birthday cake. It feels celebratory: intentionally noticing the buildings that hold some of art’s most precious things, buildings that are all too often overlooked. I take a final glance, blink a farewell to these houses of art, ideas and inspiration, and head back home.