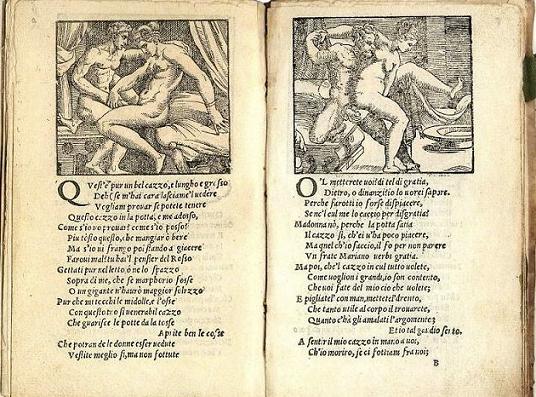 JESSICA SAMMONDS on the advancement of the representation of eroticism.

Sex dominates our culture. The arts, the news and everything in between are filled with representations of eroticism. In our supposedly enlightened age, publications such as Cosmopolitan continually update their websites with ‘secret’ sex tips and ‘naughty’ confessions. In 2012, 50 Shades of Grey became the fastest selling paperback of all time. Presentations of sex are ubiquitous in western society, but are our attitudes really as progressive as we like to think?

Let us return to some sixteenth century representations of eroticism. Recently, I happened upon the works of Giulio Romano and Pietro Aretino. Romano, a pupil of the great master Raphael, created drawings of sixteen sexual positions, to which poet and satirist Aretino wrote a series of accompanying sonnets in 1524. Engravings, made after the drawings, were published in 1527 along with Aretino’s poetry, forming what is often termed ‘The Postures’ – one of the most notorious works of erotic art to have ever existed. The illustrations present men and women in varying positions of sexual intercourse; the accompanying sonnets are a written guide to the act of fornication. Consider them, perhaps, the sixteenth century equivalent of Cosmo’s ‘Sex Tips’.

‘The Postures’ made some of the most significant innovations in the representation of eroticism: the drawings are domestic, lacking the traditional settings of classical grandeur, and the language is shockingly obscene, even to a modern ear. An extract from one of the sonnets reads: ‘Apri le coscie, acciò ch’io vegga bene / il tuo bel culo e la tua potta in viso’, which translates as ‘Open your thighs so that I can clearly see your beautiful ass with your cunt in view’ – pretty frank writing, I’m sure we would all agree. Their likeness to the ‘sex guides’ that appear in our magazines begs us to question whether or not we have progressed from the days of ‘The Postures’. Aretino’s language is explicit and direct – a stark contrast to the soft euphemisms present in the Cosmopolitan guides to sex positions, which claim that their ‘sizzling strategies’ will lead to a ‘soulful lovemaking session’.

Interestingly, the language used to represent eroticism has not only softened since Aretino’s coarse sonnets, but has also criminalised the act of having sex for pleasure. ‘Cosmo’s Guide to Sinful Sex’ titles one article, and ‘Joystick Joyride’ heads another of their ‘Erotic Instructions’. Unlike our contemporary sex guides, Aretino’s sonnets were inherently subversive as they eschewed any references to Christian morality or Classical mythology. Consequently, most copies were seized and destroyed by papal authorities – ‘The Postures’ came to be known more through hearsay than acquaintance. Nowadays, Cosmo is able to publish such guides freely online, but using a lexicon that is worryingly imbued with an old Christian morality that criminalises sex for pleasure.

So how far have we come in representing eroticism? Should we really still be calling certain positions ‘sinful’? Or equating them to ‘joyrides’? While I’m not suggesting that publications such as Cosmopolitan and AskMen should start using obscenities like ‘fottiamci’ (fuck each other) or ‘potta’ (cunt) as Aretino did, I do think that we can learn a thing or two from his innovations. If Romano and Aretino could shun Papal morality in the sixteenth century, then surely we too, in our secular society should be able to abandon the language of crime when describing eroticism. While certainly we have made advancements in the relaxing of our censorship laws, it seems that we still need to rid ourselves of an old morality that condemns sex for pleasure.