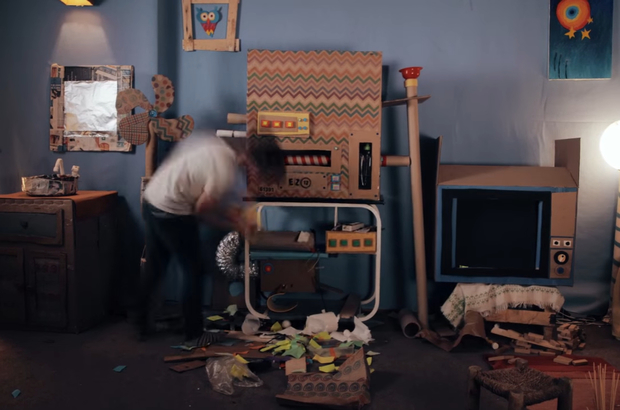 SAM SUMMERS talks to Sheyma Buali, artistic director of the BBC Arabic Festival about the film curation process, and reviews the season’s offerings with PINCHAS KAHTAN.

The BBC Arabic Festival returns to Broadcasting House on Friday 24th March, offering an assortment of public, free-of-charge events. Routinely packed with an astonishingly diverse range of short films, documentaries and reportage, the festival is already becoming a staple of the London film festival scene, amplifying a diverse range of voices emerging from all over the Arab world. This year the event is opened with a ceremony by documentary-maker Adam Curtis, whose work has, in recent years, developed a keen focus on the Middle East as an important focal point in the narratives put forward by Western governments.

Sheyma Buali, artistic director of Arabic Festival, is keen to point out the event’s curation hasn’t been governed by any strict, overarching principle–it doesn’t set out to simply redress the West’s conception of the Arabic world, for instance. ‘We don’t like to think in a complete binary of East and West. The Adam Curtis event does, of course, which is interesting because it’s one person’s take on the recent changes in the Arabic world and how they’ve been affected by historical narratives.’

Yet, overall, she says, the event simply hopes to present the individual stories that typically get lost in an inevitably fraught media landscape. ‘The way that the news portrays stories is always going to be different to how things happen on the ground; there’s always a difference between how things happen and how they are conveyed. We don’t say that this happens on purpose–or that’s it’s a malicious doing by the press–that’s just the way things are. The object of the festival is to get people who have lived the experiences, people have been over there and are real life examples of the headlines to come over here and tell their story.’

These stories are increasingly easy to document and disperse, owing to what Buali calls an ‘eruption’ of activity in the Arabic film industry in recent years. This was partly caused by the creation of the Dubai Film Festival in 2004, which helped precipitate a growing network of festivals, funding, and training spread across the region, galvanising a new generation of filmmakers to tackle the protean politics of the day. Also crucial, of course, was the Arab Spring; after 2011, Buali says, ‘the mood changed completely: people had a different impetus to tell their story; they lost all kinds of fears they had before and just started to relate to each other through this story-telling medium. Activists turned into video activists: they were challenging the way the mainstream media was depicting heir fight; they were the ones in the middle of it, grabbing cameras and uploading.’

Buali points out that film has not only been a popular form in the Arabic world for over a century, it has also long been a politically expedient one, citing Gamel Abdel Nasser’s nationalisation of the film industry–with its attendant socialist output throughout the 60s and 70s–and, more recently, the Palestinian Film Unit’s militant response to Israeli policy. These longstanding, manifold cinematic traditions explain the festival’s variety of offerings. Here are SAVAGE’s top picks:

The feature documentary The Art of Moving will be given its UK premiere at the festival; not unlike last year’s Tickling Giants, the film demonstrates satire’s efficacy as political resistance. It follows a group of itinerant online comedians–all refugees from Syria–as they shuffle about South-Eastern Turkey, uploading anti-ISIS comedy sketches under the name Daya Al-Taseh. Their precarious lives are summed up in an early scene: a talking head featuring the founder Maen is interrupted after a sound at the door startles him. The good news: it’s the landlord–the bad news: he’s here to enquire about a group of bearded men, ‘strong as oxes’, who have been surveilling the building in recent days. Maen finishes his interview whilst packing. The film does not shy away from the tragedy nestled inside of the comedy, either. Their sound recorder, Mohammed, reveals his depressed mental state with shocking candour: ‘My brain has stopped. Can you imagine that? A man just gazing; an empty mind.’ Mohammed even contemplates returning to Syria: ‘It’s better to die in your own country than anywhere else’, he reasons.

Also depicting the challenges faced by deracinated immigrants is the highly unusual, visually striking short Here You Are. The sparse film consists only of rhetorical questions, overlaid on extraordinary, receding drone footage, obliquely tackling the thorny issues of assimilation and belonging for Arabs living in America. Equally and indelibly inventive, Yaman, a stop-motion short, offers an unexpectedly dense meditation on suffering and abortive innocence during its brief four-minute running time. The eponymous character is a brave but conspicuously isolated young boy; his creative imagination animates mundane objects with the life force of a fairytale. Tissues are his principle ingredient for invention. In English, the word invokes both the paper tissues used to clean dirt—or wipe tears, and the fleshy, biological tissue that provides the seat of life. The film shows the will to transcend suffering, even if only in imagination — but ultimately, refuses to allow the viewer to indulge themselves in such opiate fantasies.

The feature documentary Ambulance, which has already garnered considerable buzz at documentary festivals, tilts the focus towards Palestine. Mohammed Jabalay films the heroic feats of a team of paramedics, led by their driver, Abu Marzouq, who stoically subdues his anger in order to focus on the job at hand, which is to operate an ambulance in the war-torn city of Gaza, lifting the wounded out of the rubble; in the chaos of war, Marzouq is heroic merely for his single-minded determination not to succumb. The film leaps from the intimacy of a single family—a single man—to reflections on the cosmic scope of suffering, largely eschewing the toxicity of party politics and the impulse to assign blame. Ambulance is an intensely human film, portraying the extraordinary risks undertaken by paramedics in the hope of palliating the suffering of the helpless people who surround them. Jabaly says that although the war has changed him, it has brought him ‘closer to reality’ through his ‘belief in the surviving people’. (Read SAVAGE’s full review of Ambulance here)

Not all of the films on show focus on heroism and violent adversity. One of the short film category’s longer entries is Aida, a patient evocation of the banality that makes up most of our lives. We follow a day in the life of the titular heroine, an octogenarian flower vendor in Alexandria, who strikes a fragile figure amongst moving cars. The quiet film is deliberately paced, gently prising open its protagonist, letting her blossom and then fade. This neat symmetry knowingly evokes the myth of Sisyphus, celebrating ordinary acts of strength and perseverance that typically remain untold.

This is, in a way, a microcosm of the festival as a whole, finding profundity in individual stories, capturing the highly specific texture of ordinary lives, scattered across an ancient and vibrant region.

For the full programme and to apply for tickets, click here.