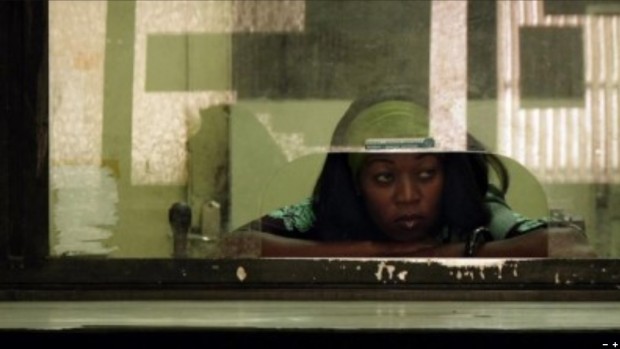 Elephant’s Dream, screened at the Bertha Dochouse earlier this month, is a poetic description of everyday life in three desolate states in Kinshasa, Democratic Republic of Congo. This is a country in a state of civil war and with a colonial history, and films depicting the country often explore this. However, Belgian director Kristof Bilsen has chosen to look at the hopes and frustrations of quotidian life. The three state institutions – a post office, a railway station and a fire station – are in a state of disrepair and the daily lives of the employees consists of a great deal of sitting and waiting around.

This sense of waiting is reflected by the film’s mood, pacing and beautifully composed location shots of largely empty spaces, such as the burnt-out fire station building (it burnt down after some cooking was left on). In the Q&A following the screening, Bilsen cited a background in musical theatre as an influence on his visual treatment of the spaces. I understand why Joshua Oppenheimer called this a ‘beautiful film’ – there is much in common between Oppenheimer’s cinematographic style (Act of Killing, Look of Silence) and that of Kristof Bilsen here.

The film’s poeticism is further established through Bilsen’s original treatment of interviews. Rather than seeing the interviewees in a talking heads setting, or perhaps speaking to them as they work, we watch the main characters sitting around and not speaking at all. We are given an insight into their inner dialogue through voiceovers that neatly match their body language; for example, the fireman makes a comment that is timed perfectly to the moment when he crosses his legs, scratches his ear, or turns his head.

The beauty of the shots and their immaculate composition does lead the viewer to wonder how much of the documentary was set-up; there is much in their style and awareness of colour to mirror forms such as street photography. There is a noticeable sense in which the subjects are aware and possibly uncomfortable with the camera, with people on screen often looking at the camera. This is undoubtedly an issue in any documentary, but felt noticeable here, perhaps only serving to highlight the challenges the filmmaker must have faced in making the film – in gaining access the trust of the interviewees, for example – and his success in creating a portrait that rings true. As for an accurate representation of their world, a member of the DocHouse audience from Trinidad praised the director for his portrayal of the mood of this post-colonial world.

This film is not flashy or fast-paced; it is emotionally subtle, as opposed to being dramatic or plot-focused. This can render Elephant’s Dream a relatively intellectual watch. The introduction to the film beautifully creates the space and silence in these dilapidated state locations; we are shown the streets in Kinshasa, the bustle and noise of the traffic, but a sense of melancholy calm falls as we enter the post office for the first time.

But there are moments of drama; we witness the firefighters tackling a blaze which has consumed the upper floor of a block of flats, in front of the ridicule of observers who mock their incompetence in having a single hose and no water pressure. We are also shown progress; the post office is renovated and the staff are taught office skills, offering better prospects for the future. The mix of tragedy, irony, hope and humour creates a certain flavour to the film: one critical of the situation and the world they live in, yet showing how the people are creating normal lives for themselves and dreaming for better prospects.

‘Elephant’s Dream’ was screened as part of the DocHouse’s ‘Filmmakers Showcase’, a new season of innovative documentaries introduced by their directors.