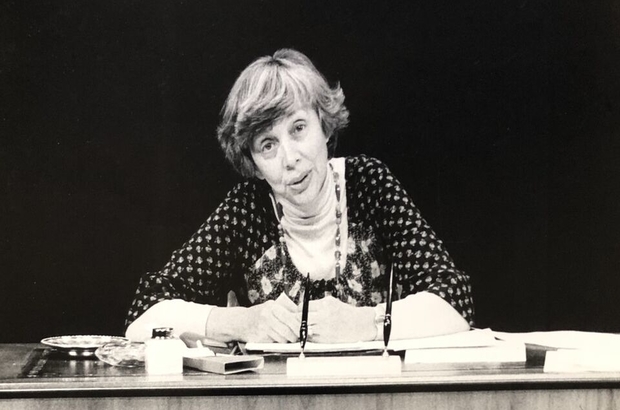 Thelma Ruby is 93. As her new play Mamma Golda unfolds, it’s astounding to remember that the spritely figure on stage’s first job was entertaining British troops towards the end of the Second World War. Ruby’s stamina is more than impressive, not only for someone billed as the oldest actress currently performing in the UK.

Ruby plays Golda Meir, the first female Prime Minister of Israel, as she faces her most serious crisis, which would eventually cost her the premiership. In 1973, on the holiest day of the Jewish calendar, Yom Kippur, the armies of Syria and Egypt attacked Israel on two fronts. The play flits back and forth between Meir manoeuvring through this crisis and her memories of her earlier life, from her childhood in Kiev to her appointment as Israel’s first ambassador to the Soviet Union. Ruby’s Hebrew pronunciation is impeccable, no doubt a result of her eleven years living in the country.

Ruby is joined on stage by only one other actor, Sean Baker, who changes in and out of an impressive number of costumes to represent a succession of men in Meir’s life. Moshe Dayan, Meir’s fearsome Minister of Defence during the Yom Kippur War, wears an eye-patch, while an exaggerated Yiddish accent represents her father. The men succeed each other on stage, nominally different in appearance but all similarly attempting to limit Meir in various ways. In thriving within the macho top echelons of Israeli politics Meir demonstrated impressive fortitude, though the effect is somewhat undermined by Baker’s too frequent mental blanks.

Momma Golda was written when Meir died, in 1978, and last performed in 1988, and unfortunately, as the play unfolds the age of its script becomes increasingly evident. Its borderline racist portrayal of King Abdullah of Jordan, complete with an entirely unconvincing Levantine accent and generic Arab robes, could not be included in any contemporary play.

In the 1990s a group of Israeli historians began challenging some of the myths central to the Israeli national consciousness. Later termed the ‘New Historians,’ they used new evidence from recently opened archives to rewrite the history of the pre-state Zionist movement and the 1948 War of Independence. The New History was far from universally accepted, but its emergence nonetheless made it more difficult to repeat some of the tenets of Zionist history, such as the implication that pre-state Palestine was a ‘land without a people for a people without a land,’ or that the Jews were fighting the Arabs to avert nothing less than another Holocaust in 1948.

It is a sign of the script’s age that Momma Golda includes many of these tropes. A play so heavily reliant on clichés more reminiscent of propaganda than considered history could not be written today. Momma Golda’s Meir evokes a direct lineage between the Cossack pogroms she remembers experiencing as a child in nineteenth-century Kiev, and the Arab-Israeli wars of the twentieth century. Similarly, she describes pre-Israel Palestine as a virgin land, its people worthy of consideration only insofar as they are ripe for civilising by European Jewish immigrants, or of fighting off as they seek to continue the work of the Nazis and the Cossacks before them.

There is a small part of truth to some of these old Zionist myths, and of course it makes sense that as a member of the founding generation of modern Israel, (Meir was one of only two women to sign the Israeli Declaration of Independence), Meir would have wholeheartedly subscribed to them. That these important questions are never seriously treated in a nuanced way is probably the play’s biggest shortcoming.

Momma Golda ran at King’s Head Theatre on the 3rd and 4th November, and will be performed again on the 11th and 12th of November. Find more information here.