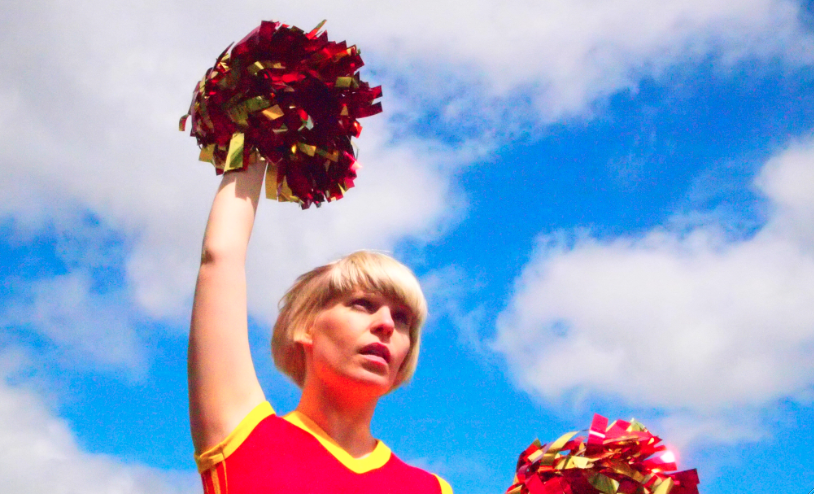 I was, admittedly, wary about viewing ‘Hoke’s Bluff’. On the surface it appears quintessentially American: centred on sports; accompanied by a barrage of up-tempo chart songs; and visually bright and loud. That, together with a synopsis suggesting it was yet another underdog story, left me certain I would be underwhelmed. Yet the clever way in which Action Hero (James Stenhouse and Gemma Paintin) knit together clichéd elements from other coming-of-age stories turns the normal underdog story into something unexpected.

At its centre, ‘Hoke’s Bluff’ is about living in the present; this is the advice applied to the two main characters, Tyler (Stenhouse) and Connie (Paintin), as they focus on their sporting struggles. Don’t look at the scoreboard – just play the game. Don’t focus on what you have or haven’t achieved: live in the present and enjoy it, as it won’t last forever.

Most peculiarly, the actual sport that the play was focused on changed rapidly, even within scenes. In one moment a character describes the cold ice of the hockey rink, before detailing the grass of the baseball field, or commenting on Tyler’s prowess at basketball, or football. This reinforces the bizarre nature of the play and, although distracting the audience from the play’s main message, it reinforces the idea of ‘everyman’ theatre.

The intimate nature of the staging meant that audience participation was used to its full effect, with members of the audience being barked at by the coach throughout. Sharing the role of the coach, the two main actors impressively retained the bluster, the frustration and the long nostalgic spiels on life consistently throughout the play. You almost forgot they were two separate people!

Action Hero were accompanied by Laura Danequin who played the singular but captivating role of the referee. She presided over the play, seguing into the next scene and interrupting long speeches on the importance of being a team with the harsh screech of her whistle. She remained an impassive God-like figure in the background, watching over Connie and Tyler as their lives unfurled and disintegrated, whilst conversely controlling the action from the very centre.

Costumes are used to great effect: the anonymous referee’s black and white uniform was a stark contrast to the red and yellow colour scheme of the Wildcat’s, a great image to show that bleak reality can intrude even in the most tightly knit relationships.

‘Hoke’s Bluff’ presented an interesting slant on the typical underdog story. At times it retains the warmth and humour we have come to expect from such a plot, whilst also subverting expectation in a re-imagination of the genre.