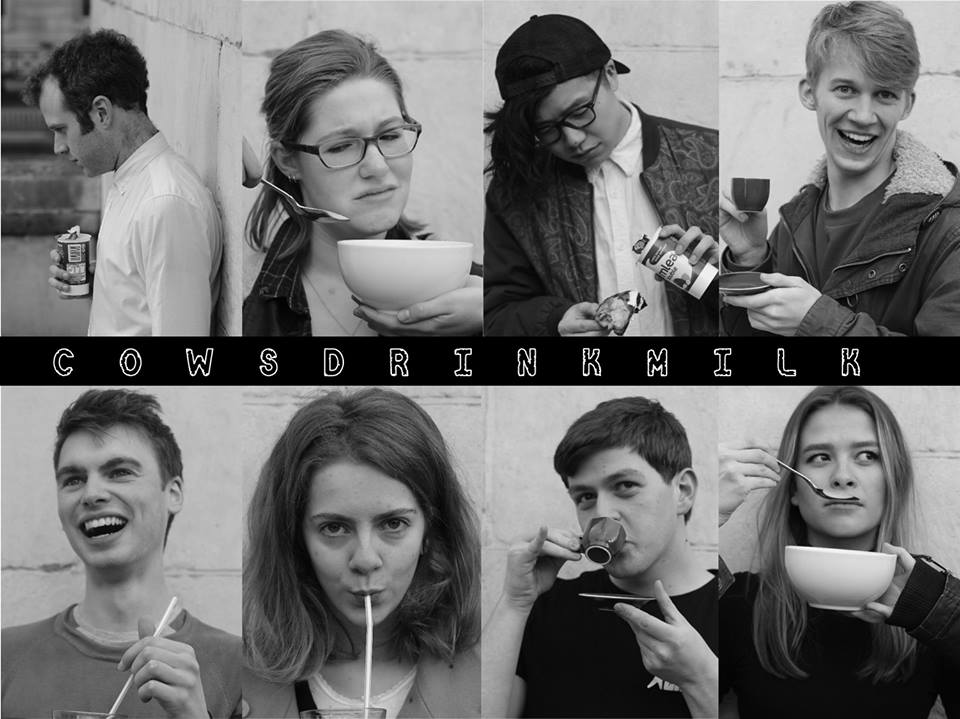 Founded in 2012 by current UCL student Oliver Marsh, CowsDrinkMilk is a comedy sketch troupe that has appeared on the Edinburgh Fringe and was written for Radio 4 Extra’s ‘Newsjack’. Their collection of sketches makes for a frenetic and witty show, and is adapted from a previous production performed way back in 2013 in Cambridge.

From the moment the troupe enter the stage, literally flinging themselves around the tiny space of the Camden People’s Theatre, there is an immediate sense of the wild energy that the show channels throughout. The sketches range quickly from subject to subject, becoming increasingly surreal to great comedic effect.

Like much comedy, this show thrives on weird and unexpected juxtapositions; whether it’s the drug-dealing nuns or the vampiric NHS advert. The writing is constantly intelligent and dynamic, especially deft at turning superficially normal situations into increasingly bizarre and deranged events. There is no overarching theme to the sketches; continuity is instead provided by the reappearances of certain jokes and characters. The electrifying performances are what bring the material to life, animating the production so that it moves a lightning-fast speed.

The audience’s favourite of the night might just be Sam Plumb, who provokes laughter every time he is on stage. His best moment is perhaps when he writhes on the floor for a good few minutes (as a paraplegic turtle, of course), which only becomes funnier and funnier over time. Equally praiseworthy is Sarah King who brings a versatility with accents and a talent for physical comedy to the ensemble, and Ed Wing whose performance as an overly zealous knight, complete with Tolkein-esque language, is incredibly enjoyable to watch.

Each cast member is equally versatile: moving from straight-laced to exaggerated ludicrousness in seconds. Perhaps the best example of this is the recurring estate agent sketch, one of the funniest of the night. What begins as an only somewhat surreal house-hunting trip quickly becomes totally unhinged in the best possible way, culminating in a JFK-quoting Satanic ritual before Lucifer herself appears to make a final sales pitch. It’s a scene that really captures the anarchic disposition and absurdity that propels this show.

Despite the fact that there are one or two sketches that don’t really take off, the entire show is an undeniable success. The group own the tiny little theatre, manically covering every inch of the space and filling it with their irrepressible comedic spirit. Keep your eyes peeled for whatever they and writers Oliver March and Peter Skidley do next.