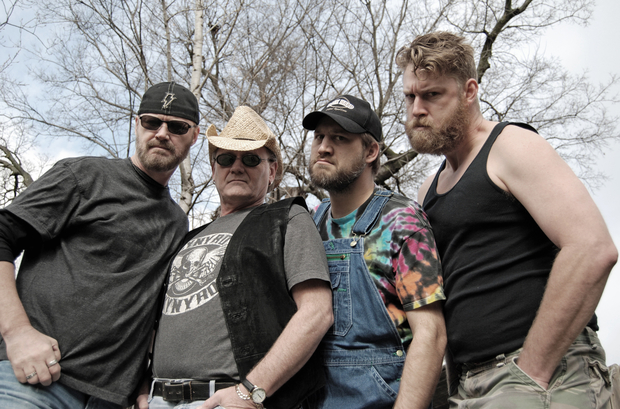 Hayseed Dixie are unlike most bands –  they have created their own genre of music labelled ‘rock grass’. Through their fifteen albums and two EP’s, they have not strayed from this self-titled creation. They have been performing covers and writing original songs for seventeen years now, they show no sign of stopping any time soon.

Frontman and singer John Wheeler is joined on stage by his fellow band members: Jake Byers on bass, Joe Hymashy on mandolin and Tim Carter on banjo – a solely string based band without any use of percussion or keys. This concert took place at a relatively large but dingy location in Islington named ‘The Garage’, and a booming crowd where I am by far the youngest. Their fan base seem to be reminiscent of those who would have pioneered rock culture in the 70s – tonight is a return to the ‘good old days’.

The four members come on stage to do their own sound checks before the concert begins, the audience are too lost in their own chatter to even notice. This sets a very casual tone for the concert, as we can watch the band warm up and tune instruments, as though we have stumbled in on a rehearsal. They nod along and sing with the background music.

The first thing that strikes me when the stage lights turn on is their outfits. Wheeler wears a tie-die apron without a shirt, whilst Hymashy has a beard twice the length of his own head and wears a vest and army-camo cap. The gig has no preliminary introduction, and they jump straight in with a cover of ACDC’s Dirty Deeds Done Cheap, tongues out, pointing towards the audience; quite quickly their string skills are demonstrated through enthusiastic and fast paced strumming intervals. I began to wonder where the ‘rock’ side of their music genre comes in, when Wheeler begins screaming metalesque lines about the devil, and going straight to hell.

After a few songs without a break, Wheeler reveals his Tennessee southern drawl, addressing the audience as though we are a congregation, stating ‘we are here to testify, we are here to bare witness, to the highway to hell’, which is met with roars of anticipation. He then says there are three key ingredients to any good song: ‘drinking, shooting, and killing’, which he returns to later in the concert. He toasts the audience with prosecco which he drinks on stage, further inviting us in. He returns to his gospel styled preaching, asking the audience to repeat after him ‘amen’, then ‘hallelujah’, then ‘Coldplay sucks’ – the latter being a recurrent theme throughout the concert.

He trades in his guitar for a violin for their rendition of ‘Bad Moon Rising’; the audience join hands, some barn dance in the middle of the crowd – everyone is thoroughly enjoying themselves just as much as the band on stage. It can be a challenge for groups to maintain genuine happiness whilst playing songs they have performed for over a decade. However, Hayseed Dixie seem to genuinely savour every moment – and they didn’t hold back on complimenting us either. Between ‘Buffalo Soldier’, where deafening ‘oh yo yo’s were screamed with every chorus, and what they described as ‘the most ‘killing’ song of all time, no questions asked’ (‘Bohemion Rhapsody’), Wheeler took the time to talk nationalism.

Wheeler says that of their 1,300 shows, across 37 countries, he doesn’t believe that honesty, and treating people with dignity differ country to country – these are basic human values. However, he says, British bar values take the prize. In his hometown in Nashville if he walked into a bar alone, he would remain alone, but here, you can talk to anyone and leave at the end of the night knowing everyone there. Furthermore, us Brits have the ability to take the piss out of ourselves, and he thinks this is why Hayseed Dixie are so well received here – they don’t take themselves or their ‘rock grass’ seriously. Americans, he laughs, don’t always grasp this – one New York Times revue described them as an ongoing joke. But then, he says, to talk of jokes, just look at our president (which, obviously, is met with cheers of agreement). He says we, with our British values, are far better than Trump, and ends his speech with ‘If anyone disagrees, they can SUCK MY DICK’.

The band take the time to discuss their new album, which is a mixture of covers of predominantly black artists speaking change; ‘Black and White’ by Michael Jackson and ‘A Change Is Gonna Come’ by Sam Cooke are two examples. Whilst singing the former, he screams the ‘I ain’t scared of your brother’ which is met with roars of enthusiasm. They then move on to ‘Don’t Stop Believin’, recognised instantly for its infamous opening notes, which seems to be a crowd favourite.

By the end of the night, everyone in the audience has drunk, cheered, and danced more than in any other concert I have attended. They work through a vast number of songs (partially due to the speedy tempo at which they are played), they keep us all on our feet – even me, as someone unfamiliar with the band, who had no idea what to expect when I walked into The Garage. This gig was unlike any other: these four men really are the best at what they do, because nobody else does it. We saw religious allusions, whilst Wheeler threw his hands up in praise mid-song; we saw him cheer and drink prosecco between every song; we saw him question war, Trump, racism. And, of course, we saw him question Coldplay (who do, undeniably, ‘suck’).