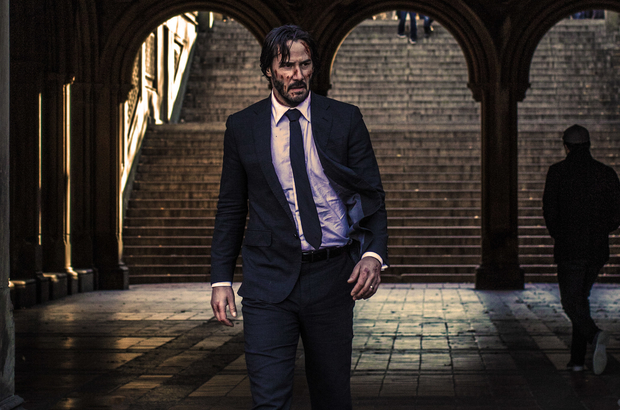 The end of awards season usually comes with a sense of disappointment – while we catch up on the final few contenders that may have passed us by, film-goers lament the coming of spring, which bring with it a slew of sub-par releases of insufficient artistic quality to be in contention come the year’s end, yet not entertaining enough to brave the saturated summer market. It somewhat surprises me to say that John Wick: Chapter 2 is the antidote to this state of melancholy.

John Wick passed me by in 2014, to such an extent that when I saw posters for its sequel on the London Underground, I sent a picture of one with a message to a friend asking whether the world ‘really needs another John Wick film?’. Keanu Reeves’s career has seemingly been in free-fall since the turn of the century, peppered with Matrix sequels and low-grade action thrillers. The release of the original John Wick came so soon after the disastrous 47 Ronin that I missed it, as the films seemed so superficially similar in nature.

However, John Wick has since garnered a cult following, and having finally now caught up with the film it is easy to see why. Wick’s closest cinematic relation is Clint Eastwood’s Spaghetti Western antihero, ‘The Man with No Name’: an infamous yet elusive man who finds himself in dusty American towns in which everybody soon wants him dead. Wick (Keanu Reeves), alternatively, has tried to escape the high-octane life of a New York assassin by retiring to suburbia with his wife, dog and beloved Mustang, but is drawn back into the seedy criminal underworld after his wife’s tragic death. What ensues is a colossal bloodbath, ignited by the theft of Wick’s car and the indiscriminate murder of his dog by a group of Russian thugs. While certainly influenced by Gareth Evans’ brilliant The Raid films in their total indulgence in bloody, brilliantly choreographed violence, John Wick has a more cinematic edge: it is a film made by people who are very aware of their genre, embracing a comic-book style humour that imbues the film with life.

If the end of the first film seemed to show Wick attempting to return to the isolated suburban bliss that he seems to desire, then Chapter 2 has him rather disappointed. Lured back in by the duty of keeping his promise to honour a ‘marker’ to Italian gangster Santino D’Antonio (Riccardo Scamarcio), Wick finds himself forced to murder D’Antonio’s sister (Claudia Gerini) to inherit a place on the ‘High Table’.

If this sounds bewildering, then that is certainly the deliberate intention of director Chad Stahelski and screenwriter Derek Kolstad. The world that Wick inhabits is a contemporary one – but an altered reality, in which assassins are everywhere, sheltered in lavish ‘Continental’ hotels around the world, with their own currency, customs and moral code. Part of the intrigue of the films is our desire to understand the inner workings of the assassin’s community, coupled with the filmmakers’ stubborn withholding of spoon-fed information. Like Sergio Leone in his Spaghetti Western trilogy, the storytellers leave back-story almost unsaid. Wick has killed three men with a pencil, and he’s nicknamed ‘The Boogeyman’ by friends and enemies alike. That’s all we need to know. As Stahelski commented in an interview with ‘Complex’, ‘We just give you some gold coins, and then it’s, “Where do the gold coins come from?” We’ll get to that. Have your imagination do some work there.’ This is modern, inventive, pared-down storytelling, needing no irritatingly explicatory flashback montages, other than those of Wick and his wife, to answer the questions that the filmmakers intentionally choose to leave unanswered.

There is no shortage of hyper-violent, high-octane thrillers centred around brooding, monotonous, hard-boiled male leads, and whilst the John Wick films are all those things, they somehow manage to elevate themselves above the cluttered field. Chapter 2 has a real sense of self-awareness and humour, and not in a smug, Deadpool way (ironically, one of the first film’s co-directors is directing Deadpool 2…), but in a manner that feels fresh and appealing. Its world is at once intriguing and bewildering – a universe dominated by indiscriminate murderers, but marked by tradition, code and ethics, where the protagonist procures guns ‘for the evening’ from the hotel’s ‘sommelier’ yet no violence is ever permitted within the walls of the Continental – James Bond, but without the incessant cliché and throwaway sexism. And, most importantly, its action is riveting. Long set-pieces in the catacombs of a Roman palace, a thrilling Subway-chase, and a pursuit through psychedelic rooms of mirrors which recalls Orson Welles’s The Lady From Shanghai and Charlie Chaplin’s The Circus are original, visually inventive and intensely exciting.

It doesn’t matter that Keanu can’t really act anymore (if he ever could), because he’s more than capable at jujitsu. I can’t wait for Chapter 3.