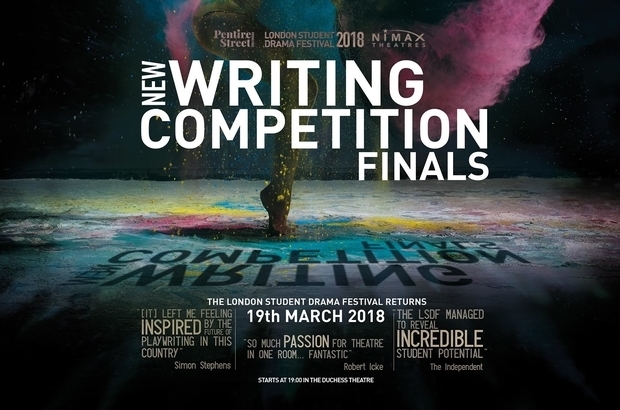 This year, the London Student Drama Festival – now the country’s largest student-led drama festival – made its West End debut when it took over The Duchess theatre for one night. In the finals of the New Writing Competition, students from five London universities took to the stage which normally houses The Play That Goes Wrong for a joyous evening celebrating all the hard work, creativity and talent that passionate students pour into theatre.

The first billing of the night was Women’s March, a piece by the Kings’ Players, constructed as a series of monologues delivered by characters attending the titular march. The play managed to present compelling, individualised characters in a short space of time, the strong writing compounded by great performances across the board. Encompassing gender, sexuality, passive reinforcement of sexist behaviour, grief and generational disillusionment, its polyphony is very effective, but the piece could have been more structurally engaging if it had built up to something, or if the individual monologues had interacted with each other a bit more. Overall it was a funny, wry, honest, at times very moving piece which felt, as one of the judges (the notoriously anonymous West End Producer) said, ‘a bit like political stand-up.’

Central School of Speech and Drama’s In Transit was perhaps the weakest of the plays, but also one of the most ambitious. One of two dystopian stories for the evening, the piece was a two-hander, but may as well have been a monologue for the central character. Set in 2035, the story followed a journalist trying to escape a war-torn Europe, trapped by a sandstorm in the Middle East. The dialogue effectively established the world but felt at times that it dedicated too much of its twenty minutes to exposition and description, resultant of its ambitious scale. While the performances initially felt hollow, it progressed towards an emotional climax that was moving and chimed neatly with the evening’s recurrent themes of sexism and abuse of power.

TBC, SOAS’ entry, was an entertaining meta-farce about the creation of a piece of student theatre. Knowing nods to the judges – ‘We may not win’, ‘Perhaps we should have chosen a politically present and undeniably edgy moment in time’ – skewer a certain perception of student theatre (and, indeed, some of tonight’s plays), and the script was littered with theatre in-jokes (The best of these: ‘You’re a Lecoq!’); this was very much a player’s play. The scenes between the actors and director were less compelling than the real star of this show, the put-upon producer, played by Bel Parker, who rightly won a Best Performance award for her role. While the actors had sex with one another, the director threw a tantrum about a lighting rig, and the writer sat stage left putting on more and more polo-necks and monologuing about her time in Berlin, the producer did all the hard work – until she descended into a bitter and murderous rage. It was nice to see the hard work producers do get its due and even better to see that producer murder her pretentious writer, demanding director and idiot actors with a prop best referred to as Chekhov’s machete. It was triumphant and hilarious, and it brought the house down.

Polly Creed’s The Empty Chair, UCL’s entry for the night, won the Best Writing award and was immensely admirable for its sheer ambition. A response to the #MeToo movement, and the allegations facing men like Harvey Weinstein, the play follows an evening with four Hollywood types as they drink, gossip, and slowly peel back layers of artifice. Though slow initially, the pace picks up as, flanked by a convulsing chorus, each of these well-defined and charismatically performed characters acknowledge their experiences of the long-standing abusive behaviour of their film’s producer. Ema Cavoli won a Best Performance award for her measured, emotionally open depiction of an actress who was sexually assaulted (as she says, she finds herself avoiding the word ‘rape’) by the producer many years ago. The older actor amongst them, Ingrid (Róisín Tapponi)’s mantra of denial – ‘There are always two sides to these things’ – falls away towards the end of the play, when we learn that while she may be cruel at times, she is also horribly sad, and her husband’s years of abuse weigh heavy on her. It would be interesting to continue to develop the piece into an even more multifaceted and deeply probing exploration of its central themes, but as is, the emotional toll the powerful piece had on the audience was palpable.

Pangea by Lewis Kirkpatrick, Goldsmiths’ vibrant, bizarre, in-your-face entry, certainly knew how to put on a show. The second dystopian tale of the night took the form of future dystopia Pangea’s ‘greatest gameshow: The Interview for High Office.’ The play poked fun at the absurdity of modern politics through a dystopian lens, using gameshow structure, madcap choreography, high-concept design and surreal jokes to thoroughly entertain, and to explore pointlessness, arbitrariness and ‘democracy’. The set and costumes were the most inventive of the night and the slick, dark comedy earned a well-deserved Best Direction award. The piece was wonderfully performed, with everyone fully committed to the weirdness, which made it the success it was. When I heard a deep, deep sigh from the man behind me, followed swiftly by a muttered ‘What the fuck is this about’, I wanted to turn around and reply: ‘I think that’s exactly the point.’

The evening felt less a competition, and more a celebration of the work that passionate students work so hard on. Student theatre is a space for young creatives to give things a go. Combined with the excitement provided by the scale, the wide range of the pieces made it a fun event that brought our usually disparate London universities together. This is something LSDF should be very proud of, and will hopefully continue in the years to come.