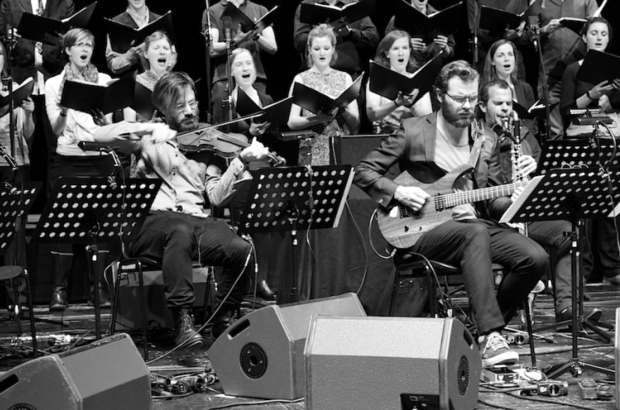 At an evening of ‘classical’ music, nobody expects to see festering pile of tech and synthesisers that stands in place of an altar in the nave of the church. Indeed, this evening is truly a collision of classical with electronics, delivered by the collective s t a r g a z e , described by Boiler Room as ‘the renegade new classical ensemble’. The group combines sublime instrumentalists with a pioneering attitude, led by the forward-thinking conductor, André de Ridder.

The evening begins with a world premiere of Qasim Naq electro-acoustic work, Inaugural Music. Opening with swooping, rising synth chords, the instruments of the group blend almost imperceptibly into the electronics. Working in conjunction with the synthesiser and then echoing the chords of the ensemble, the music acts as a dialogue between the ‘real’ sound and that of its musical automata. The piece’s beguiling texture and subtle discord imbues it with a fragile beauty.

Nik Colk Void, one third of ‘Post-apocalyptic’ electronic trio Factory Floor, follows with her piece inspired by the shifting landscape of East London. The opening is magical: a simple percussive beat, made by pressing the keys of the woodwind instruments and shaping them into a sound resembling the cataclysmic boom when you step out of the doors of a club into the smoking area. The metric quaver rhythm underlying the piece spurs on the music, evoking the passing of time. Changes happen around the continuous pulse: against this subtle movement there are moments of climax as moaning strings and huge drums seem to rumble the foundations of the piece. Eventually, the piece softens once more into a smokey texture, much like when the city reaches a new equilibrium after drastic change.

Post-interval, we are treated to a complete orchestral rendition of Daniel Brandt’s 2017 album Eternal Something. In the programme, Brandt suggests this was conceived as a cymbal album but then he found that almost against his will, other “ideas and instruments imposed themselves upon [him]”. This is manifested in his high-octane performance, where Brandt himself leapt between instruments, puppeteering the cacophony. Brandt labels the music ‘dance’ — and it is true that it injected you with energy, an inability to sit still. Within the set, he explores a range of dance styles from the ‘Party Song’ dedicated to his Grandmother (in the audience, all the way from Frankfurt for her 70th birthday), to Latin grooves. The syncopated bass and heavy drum beats smattered with cross rhythms and swooning violins engender genuinely life affirming music.

Unable to dance physically in the (unfortunately) restrictive seating, the audience bobs its collective head and body quietly. Everybody leaves the venue smiling and chatting, the music sending endorphins and electricity spinning round our bodies.