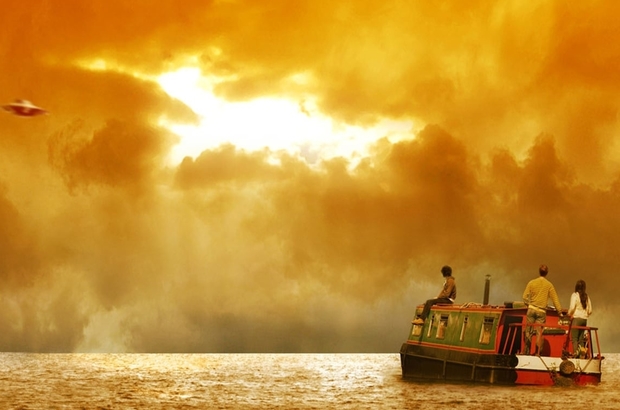 SAM SUMMERS asks Will Sharpe about his mercurial career and its latest, most ambitious offering.

Will Sharpe doesn’t make it easy for himself. Given that the success of his debut feature Black Pond earned him his own Channel 4 sitcom–the mordantly witty Flowers–he might be forgiven for resting on his laurels. Yet, although Flowers garnered an enviable cast including Julian Barrett and Olivia Coleman, rave reviews, and a second series, Sharpe has returned to the demanding world of low-budget filmmaking, reuniting with director Tom Kingsley for The Darkest Universe.

In fact, Sharpe and Kingsley aren’t really reuniting; the pair have been working on the film, on and off, for three years. Sharpe’s co-writer Tiani Ghosh wrote the first draft, and the two of them developed it from there, meeting up and playing out scenes together. It was an unpredictable process, Sharpe recalls: ‘I guess writing is always… it can be quite horrible, to be honest! It’s completely on the script’s terms; there’s no guarantee as to when the script is going to help you, or give you an idea how to crack a given problem. In retrospect, months get compressed into three-second memories – you forget all the bits in between when you were just begging for an answer.’

The plot of The Darkest Universe hinges on the disappearance of a barge on the Regent’s Canal, taking the laconic Alice (played by Ghosh) and her awkward boyfriend Toby (Joe Thomas) with it. Her brother Zac (Sharpe) mounts an increasingly fraught search for the boat; met with condescension from the authorities, he attempts to raise awareness with a series of desperate, revealing vlogs. The story is told in a non-linear, restless fashion; flashbacks and vlogs puncture the story, coiling enticingly around the central mystery.

The film was made ‘in a very weird way’, Sharpe explains. ‘We had very little money. Tom and I would constantly be across many different jobs–whether it be making sure you’ve got the lunch you cooked the night before, or picking someone up from the station, or suddenly you need a piece of equipment for the camera because it’s sunnier than you thought it was … so it often felt quite manic, I guess’. Whilst Flowers benefitted from a more orthodox casting process, The Darkest Universe utilises Sharpe and Kingsley’s coterie of comic friends; familiar faces Simon Bird and Chris Langham have small, memorable roles, whilst up-and-comers such as Sophia Di Martino bring their fresh, off-kilter comic instincts to the table.

Flowers was the best evidence to date of Sharpe’s distinct comedic voice. A heady mix of Lynchian unease and quotable, quotidian dialogue, the programme came to the fore in a TV schedule losing a lot of cutting-edge content to rival platforms. He doesn’t overthink his style, but does recall a sketch from his childhood in Japan that may have influenced him: ‘It was about a boy – although it was a man just dressed up – whose parents have split up, and he would go to the park when he was feeling sad and lonely, making friends with a lizard (again: a man dressed up). There weren’t really jokes; they would just hang about – and the joke was that they had really mundane conversation, about pack lunches and current affairs, but one of them was a lizard. So I sometimes wonder if that collision of big stylistic flourishes set against low key humour had some effect’.

Sharpe moved to England when he was 8 and delighted in post-watershed re-runs on Friday nights, showing programmes like The Young Ones and Goodness Gracious Me. ‘And then, of course, I loved The Day Today, The Armando Iannucci Show, Nathan Barley… just lots of different stuff’. I mention that all of these play around with the boundaries of surrealism and realism. ‘I think that’s fair. Tom Kingsley and I often find ourselves saying, mutually, that with comedy we don’t really find it funny unless you believe that the characters are real and human enough to have their own stories. Likewise, with drama, I don’t really find it affecting unless it has a sense of humour as well’. Instead, Sharpe prefers to sneak deeply serious themes under the comic radar: ‘Comedy can be quite a usefully-disarming tool, if you want to misdirect someone so they’re not expecting to be moved’. He pauses for a moment and observes gleefully: ‘It’s almost like if you take them to a lighter place they’ve got further to fall…’

Sharpe’s latest also drifts into the surreal; the most startling feature of The Darkest Universe is a series of ambiguous, allusive vignettes that hint at, but never quite reveal, the presence of a parallel universe. ‘It’s definitely not a sci-fi film,’ Sharpe makes clear. ‘Sometimes we describe it as a non-sci-fi sci-fi film. That doesn’t help either; nobody knows what that means. It’s essentially a comedy-drama – a missing-persons story about, perhaps, grief, and how to find closure when none is available to you. So it’s hopefully funny, but it’s also quite a sad story’.

This flirtation with sci-fi was much more evident in early versions of the film, but ultimately Sharpe and Kingsley tampered it down, allowing the remaining sequences to take on a dreamy, evocative quality – lingering, amber-coloured wisps of something other, something unexplained. I bounce off a few films that also offer a glancing glimpse of the supernatural – would Sharpe compare it to the ending of Birdman, or Safety Not Guaranteed, perhaps? ‘It’s a little bit like those. It’s mainly a human story. There’s sci-fi imagery; it hopefully gives the audience a choice, so you can watch it as a little more sci-fi, but it’s also available to you to see those sequences as psychological glimpse into characters’ state of minds. A quite grandiose reference would be Solaris. You have the choice of watching it metaphorically.’

When looking back on the filming process, one story stands out for Sharpe. Whilst filming rural shots in Uxbridge, they learned that Camden Lock was due to be dredged the following day. ‘This boat, in about ten hours’ time, was going to be locked out of its mooring spot in King’s Cross for six months – it would have been a disaster. So we ended up having an overnight trip with McDonald’s and bottles of beer, not really shooting anything. I guess that sums up how we made the film: constantly surviving by the skin of our teeth, relying on goodwill and collaborative spirit. But it was fun nonetheless’.

It’s clear that this collaborative spirit is crucial to Sharpe’s work. He describes the process of low-budget filmmaking as ‘hard and stressful’, but Kingsley and Sharpe leant on each other for support. ‘A lot of the time you feel quite mad. Like, is this the stupidest thing I’ve ever done? But if there’s two of us, psychologically we can support each other.’ Sharpe’s face breaks out into a mischievous grin. ‘At least we can say: you’re mad as well’.