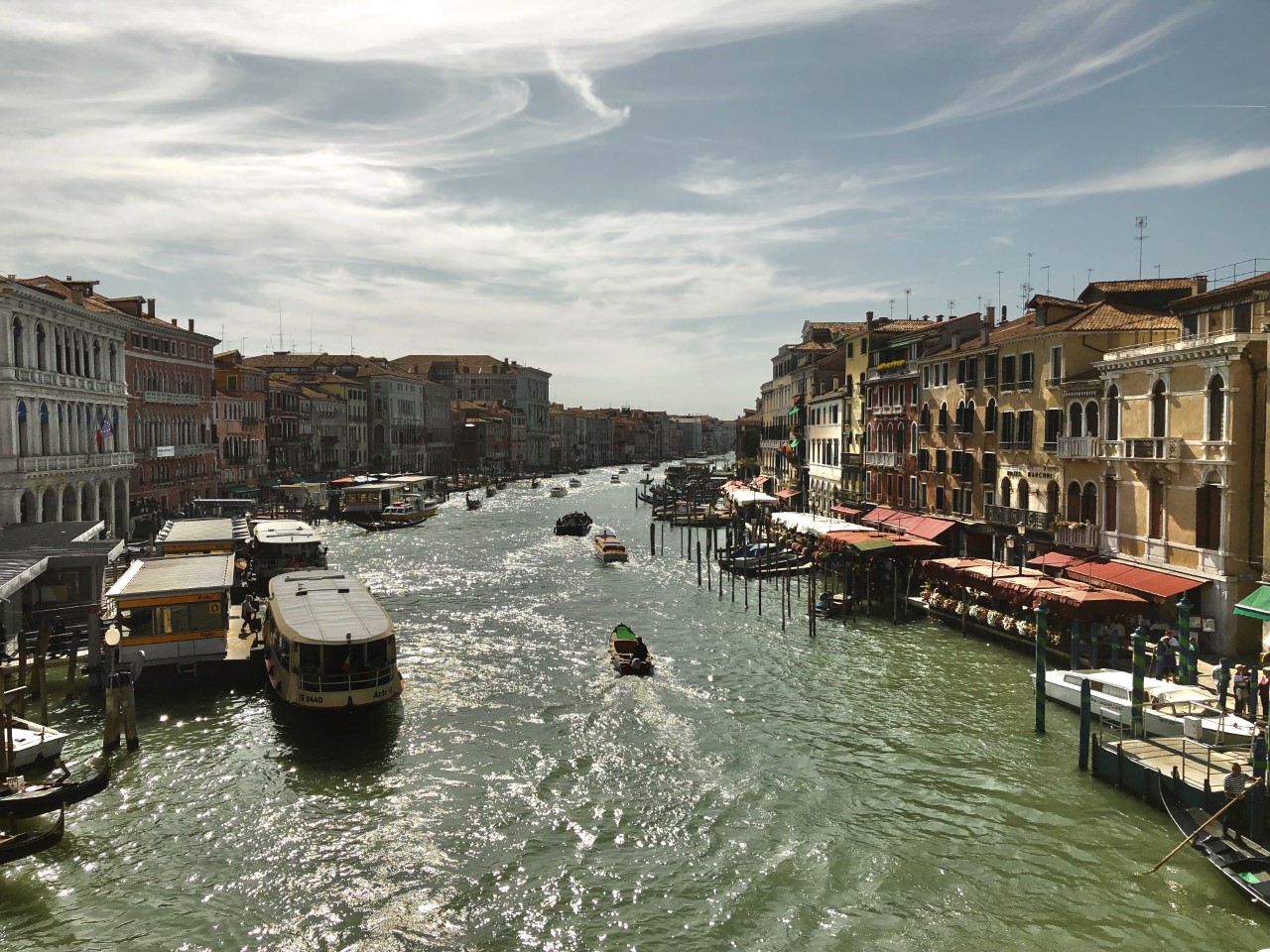 READ Curator’s note: This post is the first instalment of a 3-part short story. Subsequent instalments will be posted later, so do check back for more!

I’d hoped she wouldn’t mention it, but it was inevitable, when we were surrounded by so much water.

“Reminds me of the longkang[1],” she said. “Just that it’s slightly prettier.”

We were standing on a bridge which arched over a narrow canal. It cut deep through the crowd of buildings which seemed to spill from the platforms, two of the hundred or so islands that made up the island of Venice. The walls of the buildings which flanked the canal were pastel yellow and pink, chipped at the edges, bald in some spots. Along the canal floated several small boats, old wooden longboats with a single motor attached to the back. In the distance, a gondola was approaching us, the gondolier standing at its bow armed with a long oar. He was singing, a deep baritone voice which echoed off the walls and grew louder as he steered the craft towards us.

Xin Ying went on to explain how and why the canals here, in Venice, were like those in Singapore: water flowed through them, they flooded sometimes, yes, you could argue that the water in Singapore looked like teh tarik[2], but here the water wasn’t clear either, clouded by the Venetian silt upon which the city rested. And they weren’t natural rivers, they were canals, longkangs: man-made waterways bounded by man-made structures, for man-made purposes. It was all rather crass, she argued, the lack of natural beauty in these longkangs.

“Well, yes,” I replied. “But the man-made purposes are very different. The water in Singapore carries waste. The water here is for transport. Transporting people.”

She shrugged. “You could argue that the Singapore River is a giant longkang.”

“You could argue many rivers are longkangs,” I replied. “River Thames, for one.”

“Well, alright,” she admitted. “Maybe not the Singapore River. But the ones along the road. Along Bukit Timah Road, for example. Remember how it flooded all those years ago? Really jialat[3].”

I grunted. I didn’t mean to be rude, but I had come here to enjoy this city of so many couples’ dreams, and so far it had been difficult. The throngs of tourists, people like us, bore so heavily on the tiles everywhere: St Mark’s Square, the smaller piazzas, even on some of the larger bridges. I wondered if they were the reason that Venice was sinking. Even if they were not responsible for that, they were responsible for my drained energy. Weaving through them with her hand in mine, I felt I was a large cargo ship being towed to its destination, or that I was towing a ship to its harbour. Either way, with the heat washing past us, every part of me was growing heavier.

And now, the mention of the longkang. It was not just the fact that calling the canals longkangs was belittling of them. They built a floating city around these canals, for goodness’ sake. They didn’t just burrow into ground. They built a city on water. But more than that, I had hoped that here, thousands of kilometres away from Singapore, I would not be reminded of it, not least that specific feature of the city. We were on our honeymoon, I thought. We should be escaping to fantasy, not reminding ourselves of normalcy.

“Do you want to take a picture together?” I asked. Xin Ying nodded and smiled sweetly. Her hair, unfettered by the hairband she usually wore, was billowing in the wind. I reached for the few strands which had wandered onto her face and pushed them behind her ear. We shuffled against each other and put our arms around each other’s shoulder. I stretched my arm out to take the photograph, and when I looked at it later it reminded me of the way we were when we were back in school together, inseparable and always grinning. She’d offered me the first form of escape I’d had in my life, and I was thankful for that.

That night, in the hotel room, while Xin Ying was in the shower, I wondered if I should broach the topic to her. We’d promised that we would talk about it during the honeymoon, and I’d thought that would be enough scheduling to ensure it would happen. But now I realised that our honeymoon was two weeks, we were hopping from one city to another every three or four days, and so much was happening that this issue could easily sink beneath all the fun we were having now.

After she emerged from the shower, she hung her white hotel towel on the chair at the dressing table and joined me on the bed. The incandescent glow of the lamps around us was making me sleepy. Her hair smelled of lavender and something else I could not yet put my finger on, and it hung in thick wet ropes from her head. I patted her hand beside me, and opened my mouth, but the words could not come out. I wanted to discuss it gently with her, to explain my point of view, to listen to hers, but the problem with discussions is that you cannot control the outcome.

She’d never really understood why I did not want to return to Singapore, why I wanted to stay in England to work. For her, Singapore was home. Singapore was family. Singapore was comfortable. On that island we’d both grown up in, there were few uncertainties. And yet, what she did not see was that it was precisely because of all those reasons that I did not want to go back. All those descriptions of the sunny island: they reeked of… precisely what she had said. They reeked of home, a smell all too familiar to me.

“What are you thinking of?” she asked presently. I realised that her hand was now on top of mine, the smooth skin of her palm laid upon me.

“I mean, I’m thirsty.” I swung my legs onto the carpeted floor and pushed the duvet aside. “Do you want me to pour you some water?”

“Okay,” she said, her eyes following me around the room.

Night. The room in pitch black darkness. Xin Ying was curled up beside me in a foetal position, cocooned up in most of the duvet. I could hear her breathing, and together with my rasping, shallow breaths, we were participating in a strange unintentional duet.

I closed my eyes and imagined water. Ten years old, clad in a Bossini T-shirt and a pair of white shorts from the stall at the market, riding my bicycle by the green railings. I was following the water in the longkang beside me, while the rain whipped my face and splattered my clothes. The heavy downpour had trickled down to a light drizzle, but the canal was still foaming with muddy brown water. Every now and then, a large branch would break the opaque surface and stir through the ripples, spinning as it careened downstream. Brown leaves were still falling into the water, and they raced ahead of me the moment they touched the water’s surface. I wanted to see where each one went, but every few seconds, they would be swallowed by the waves and I would have to find a new target to follow. When I finally rode back home, I was drenched. I stood in the doorway dripping rainwater onto the ceramic tiles of our HDB flat while my mother unleashed a tirade upon me.

The next day, at dinner, my mother told me and my sister—two years older than me—a story. A while ago, there was a boy who decided to explore the longkang behind our block of flats. What his name was, was not important. What was important was that he had disobeyed his mother and gone down into the canal, clambering down in his slippers and shorts, to go and explore what there was inside. What did he find? That wasn’t important as well. What was important was that while he was down there, a thunderstorm suddenly began, and the rain poured into the longkang and filled it up. He didn’t know it at first, he was too far in; deep in the darkness, he didn’t hear the rain. By the time he heard it, the rain was pouring in and the longkang was filling up. He tried to swim against the current, but you know, this kind of current, it didn’t matter if you knew how to swim or not, it was just too strong. He was swept away, and he was never found. The family was devastated.

“Do you want to be like that boy?” my mother asked, glaring at me.

[1] A Malay term (Malay is one of the languages used in Singapore, the island city-state where this story is partially set) referring to canals or drains which drain dirty water.

[2] A Malay term for hot milk tea, prepared by pouring the tea and milk repeatedly between two containers. It has a light brown colour.

[3] A Hokkien dialect (Hokkien is one of the dialects spoken by the Chinese in Singapore) term meaning “energy-sapping”, referring to a situation which is far from ideal.

[4] A long pole usually made of bamboo. It is used to hang clothes for drying, especially in high-rise flats.