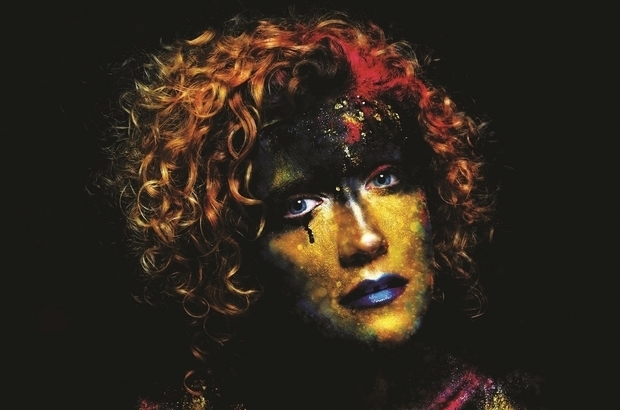 Pecho Mama’s Medea Electronica is a triumph. Euripedes’ tale of a woman scorned, pushed to the very limits of the human to verge on the bestial and monstrous, leaves us reeling; despite Medea’s vile actions, we remain – somehow – sympathetic. A musicalised punch in the face, driven to its horrifying conclusion by a cacophony of clicking and whirring that confirms, just as Dorothy was no longer in Kansas, we are no longer in Ancient Greece. That Euripedes’ age-old tale can even move us within the context of an ‘80s prog rock gig is testament to the universality of its themes; it is a radical transformation, but one that is extraordinarily effective. Indeed, the trinity of artists entering the stage before the lights go down, as we are plunged unrelentingly into Medea’s story, establishes that this will be a very powerful (if quirky) performance indeed. It was so disquieting yet compelling that I actually felt a need to experience it again, something no piece of theatre has ever incited me to do previously.

The production is fundamentally female, concerning a woman in a situation that could only ensnare a woman. The absence of any of the male characters who lead to her demise places them solely in her mind: the space comes to embody her physical self, and the landscape becomes the landscape of her mind. Her husband Jason and her two sons are replaced with voices to whom she speaks, engendering a metamorphosis of the gig-like stage into a space that encapsulates her physical being and the various earthly domestic and existential spaces she inhabits. The suspended lightbulbs and familial symbols, including what could be primary school chairs, tremble and quiver and eventually become debris surrounding the protagonist, as her comfortable domestic sphere crumbles at the actions of her adulterous husband. A standout moment for this excellent symbolic use of set is when Medea writhes in a smashed glass to become covered in her own blood, a foreshadowing of the murder and a furious physical depiction of how far love combined with patriarchy has driven her. Her ripped, abandoned blue clothes that screamed motherhood and the idealised madonna-mother figure create a sickening debris around her as she descends into what Freud may have scornfully termed feminine hysteria at the edge of human behaviour. Smothering her children with her old blue dress she also disturbingly suffocates our notion of the mother figure and her former self.

The age old question of Medea as proto-feminist, feminist or quite the opposite is attacked voraciously in this piece, enough to make us question our current societal structures’ established bias against women. We feel such intense sympathy and repulsion towards this figure, and this production pitches her as someone we could recognise and encounter in our own lives. The stage is flooded with uterine images and sounds of water that remind us of amniotic fluid, combined with lyrics speaking of birth as rupture and her children as her own physical flesh. This does justice to Medea’s battle with murdering her children as an act of suicide, and reminds us that she is the centre of this work. Ancient Greek society’s vicious methods of shaming the abandoned  ‘crazy’ wife become the poisonous modern translation of ‘sole custody’ and a divorce lawyer. As Mella Faye’s Medea’s frightened eyes search frantically in the well-lit audience for sympathy, we become a society of bystanders, merging with the voices of her family to seal her fate. It certainly feels appropriate that the first word sung in the production is ‘woman’, and until the very end, Jason remains relatively unscathed against the backdrop of Medea’s disintegration.

Above all, however, the most striking element of the piece is the songs, composed by the company perfectly to suit the mood. The music is spine-tingling, penetrating the audience’s physical being to force them to feel what they dictate we should towards Medea. These are shuddering songs of anger, defeat, heartbreak, and ghastly fear. In conjunction with Medea’s movements that transform progressively from elegant and balletic to convulsing and bestial, a truly visceral piece is created. The tendency in modern productions to present Medea as a jerking, pulsating being is a great one, as her story is enhanced so intensely through physical, dance-like presentations. Though some of the lyrics could be heard in a conventional pop song, their meaning is rewritten and transposed into a powerful series of heartrending pieces that accompany and vocalise beautifully Medea’s story. Such dependance on music and a subversive form of dance could have taken away from the words of the original text, but instead it proves the universality and adaptability of this play. The language is not what carries it, but the music and dance.

Medea Electronica is truly transcendental and refreshingly new in its approach. Though according to many a critic and academic, theatre is never original, this comes perilously close to being so, making it all the more genuinely moving and powerful. An ancient play as an electronica gig pushes as far away from anything similar to Peter Brook’s theorised Deadly Theatre as could be; it is truly in the realms of the unknown. It will leave you breathless, sickened and exhilarated, and, in my case, wanting more.